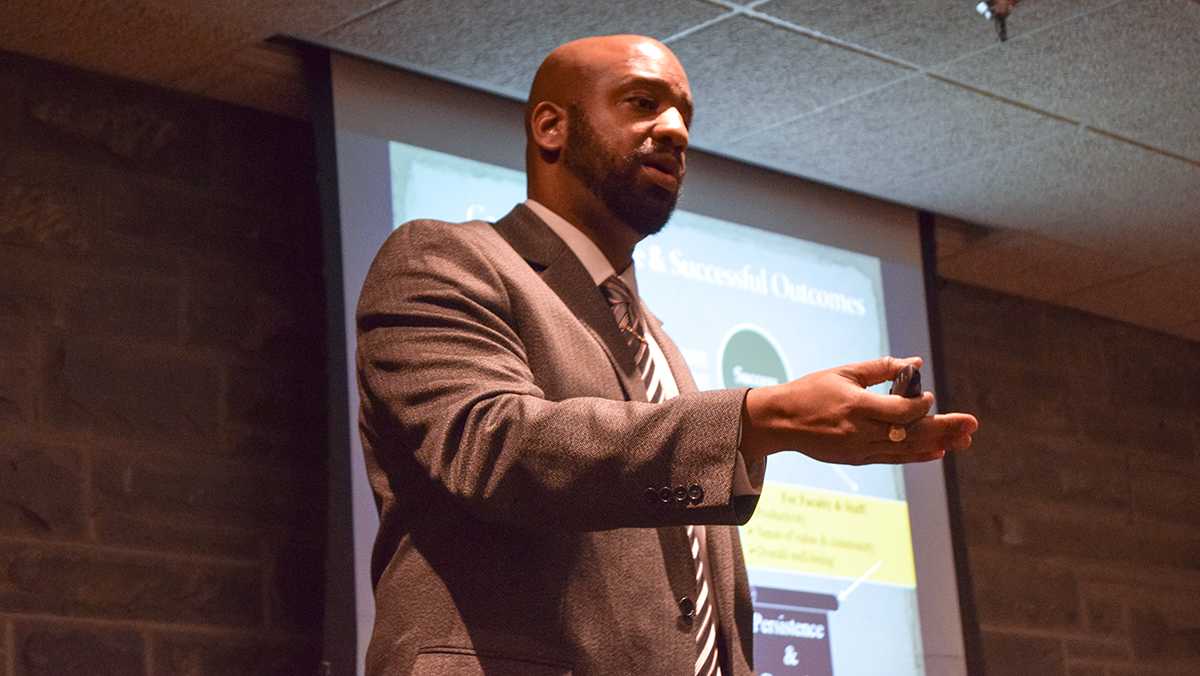 A third-party consulting company that Ithaca College hired to conduct the next campus-climate survey came to campus Feb. 2 to present its plan to students, faculty and staff for developing and carrying out the survey.

Rankin & Associates is a consulting company that specializes in assisting colleges and organizations in assessing and analyzing their environments in how they affect the wellbeing of those who live and work there. The company is currently conducting its assessment on the University of Missouri and Dartmouth College, two college campuses that have also seen a wave of student protests demanding racial justice. Overall, Rankin & Associates has completed campus-climate survey work for over 170 institutions, Richardson said. Dr. Susan Rankin and Emil L. Cunningham delivered the Feb. 2 presentations.

Rankin said at the student presentation the college had approached the consulting group about conducting a campus-climate survey almost two years ago.

Richardson said positive feedback from other institutions on Rankin & Associates helped influence the college’s decision to choose the company to conduct the survey.

Aside from campus-climate surveys, the group also published the 2015 United States Transgender National Survey, the 2010 State of Higher Education for LGBT People, the 2011 NCAA Student-Athlete Climate Study and surveys dating back to 1999, according to the presentations given Feb. 2.

The consulting group presented the plan for developing and conducting the survey to the campus community in three separate presentations: one for students, one for faculty and one for staff. Each group was presented the same PowerPoint, which outlined the criteria and stages of assessment, followed by a question and answer session conducted by Rankin and Cunningham.

According to the presentation, the plan is broken down into four phases of action. Phase one consists of constructing focus groups, which will consist of eight to 15 people each. Phase two will involve taking the information derived from the focus group and developing a plan and eventually a proposal. This phase will also include conducting the campus-climate survey for students, faculty and staff. Phase three will involve the assessment and analysis of the survey results by Rankin & Associates, and phase four will be the final presentation of the results.

When the data is finalized, Rankin & Associates will encourage the administration to make three action plans based on the results. David Maley, senior associate director of media and community relations, said the total cost to the college for the survey to be developed, conducted and analyzed will be approximately $70,000, spread out over two or three fiscal years.

Because this data will come out during the transition from current college President Tom Rochon to a new president, Richardson said the administration has yet to decide how it it will release the data to the campus community.

Stacia Zabusky, associate dean for curriculum and undergraduate programs in the School of Humanities and Sciences, attended the event for faculty.

“I think their process is very inclusive in getting community input,” Zabusky said. “So it seems to me the instrument they developed, if people participate, will be effective.”

Librarian Lisabeth Chabot said the staff presentation was helpful for understanding the details of the survey’s timeline and confidentiality standards.

“I think that’s typical of our student body to not show up to events like that,” Stewart said. “Events that are important. Events that give us a voice. I think that the people they brought in to talk to us knew their stuff.”

During the Q&A at the student presentation, several students voiced their concerns about the administration’s releasing Rankin & Associates’ survey results. The results of the Campus Acceptance, Inclusion and Fairness Survey conducted Fall 2012 were not released until February 2015. Senior Nuria Hunter asked how students could know the data would be released in a timely manner.

“I guess my whole question and a lot of our questions tonight came from a very tangible distrust of administration based on so many reasons,” Hunter said. “I also think that we have to remember that Rochon isn’t the whole administration. A lot of the administration that we have a problem with is going to stay the same, so that’s kind of where my unease and hesitancy comes from.”

Cunningham responded to Hunter’s question by discussing flaws in the 2012 survey and the transparency that will happen with the Rankin & Associates survey. Cunningham said the previous survey had questions that were asked in subjective ways.

Rankin said part of phase four ensures some accountability, and her previous experience in higher education has helped her to understand the importance of accountability.

“Because we hold them accountable to have three actions from the report and they have to tell us what they are and that they’re measurable, you can see what’s going to happen with them,” Rankin said. “That’s important.”

Parita Desai can be reached at pdesai@ithaca.edu or via Twitter: @paritadesai_