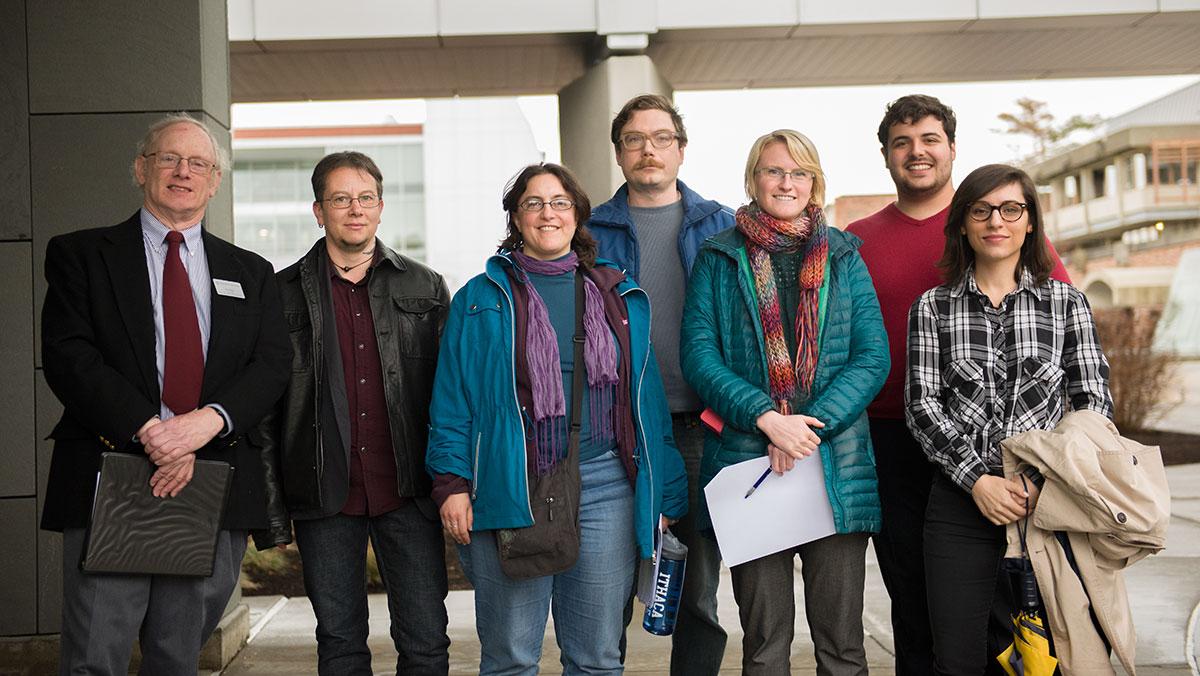 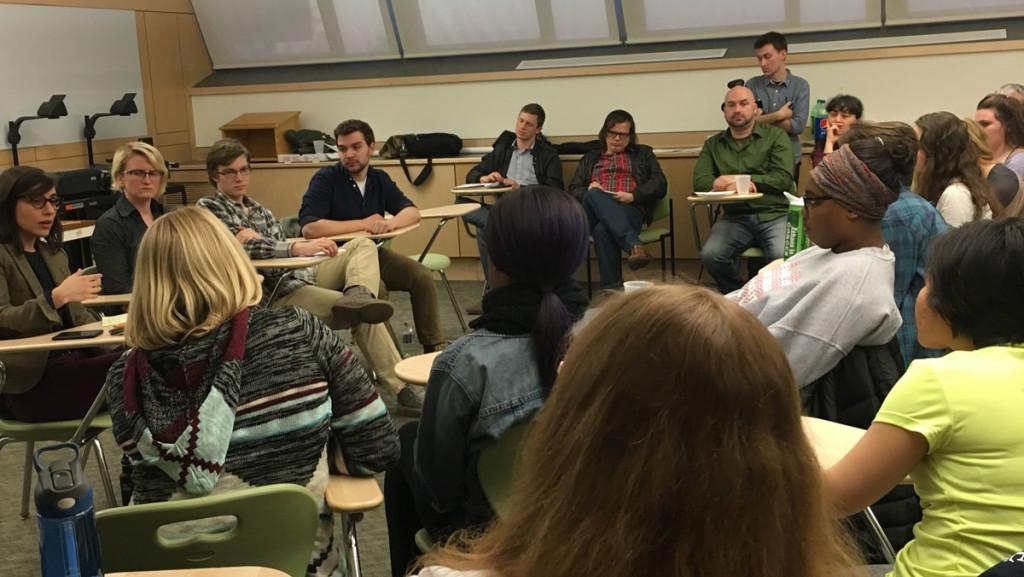 Over 50 Ithaca College faculty members and students gathered April 14 in Job 160 for a teach-in about working conditions for part-time and full-time contingent faculty at the college. Photo by Evan Popp

Mike Mauer, senior labor adviser for the American Association of University Professors, said it is relatively common for full-time contingent and part-time faculty to unionize together.

“It’s not at all unusual,” he said. “But there’s a big asterisk here, which is depending on what law applies to the organizing, it’s sometimes not a possibility.”

For example, he said, in Ohio, there is collective bargaining — negotiations between employees, who are commonly represented by a union, and employers — regarding working conditions for full-time faculty, but part-time faculty members are not covered by the law.

At private universities and colleges such as Ithaca College, there are different laws, Mauer said. He said the 1980 Supreme Court decision NLRB v. Yeshiva University ruled that for the most part, tenure-track faculty members aren’t covered by the National Labor Relations Act, which gives employees in the private sector the right to unionize.

John Delaney, professor of business administration, organizations and entrepreneurship in the University of Pittsburgh’s Joseph M. Katz Graduate School of Business, said this is because of the court’s definition of the job of tenured and tenure-track faculty.

“Effectively, it said that faculty are, in a way, managers and supervisors, and therefore, they’re not eligible for coverage under the National Labor Relations Act,” Delaney said. “This would be the full-time, tenure–stream or tenured faculty.”

Mauer said this impacts who unionizes at a private college or university, as usually only contingent part– or full-time faculty end up unionizing.

One institution where full– and part-time contingent faculty members are in the same union is Saint Mary’s College of California. Rali Christo, a lecturer in the Department of Classical Languages who is on the bargaining committee of the union, said negotiations between the administration and the union are about to wrap up. Christo said the deal won’t be perfect but that contingent faculty expects to receive better job stability, pay and access to benefits. The union and the administration are still negotiating over compensation and benefits, Christo said.

Christo said there was never any doubt that all the contingent faculty members would unionize together.

“The people who are full-time contingent faculty — they still have insecurity,” she said. “They can be told at any time, as I was told, that they will be reduced to part-timers. So it is in our best interest to be together.”

There was no pushback from the administration on part– and full-time contingent faculty’s unionization together, Christo said.

Multiple requests for comment from the college administration were not returned.

Grunebaum said it made sense for all the contingent faculty, whether part– or full-time, to unionize together.

He said the university’s administration fought to exclude as many members of the faculty community as possible from the election to unionize.

Jeremy Manier, executive director of News and Public Affairs at the university, did not respond to repeated requests for comment.

In contrast, a university fighting against the partnership of part and full-time contingent faculty is Loyola University Chicago. Alyson Paige Warren, an adjunct instructor in the Department of English, said the contingent faculty has formed a union in the LUC College of Arts and Sciences. However, Warren said Loyola University Chicago, a Jesuit university, appealed the formation of the union, citing a religious exemption. Warren said the university lost its appeal in Chicago but has appealed it to a higher court in Washington, D.C.

Multiple requests for comment from the university administration were not returned.

Patricia Markunas, a tenured professor in the Department of Psychology at Salem State University in Massachusetts and has studied labor issues in higher education and is the former president of the labor union the Massachusetts State College Association, said one reason administrations generally don’t like unions is they challenge the administration’s authority and make contingent faculty more equal.

Additionally, she said unions are often formed by faculty who want better financial security, which costs colleges and universities money.

“When people bargain collectively, they tend to improve salaries and teaching stipends and tend to include benefits that might not have been paid before … so it would have a financial cost,” she said.

Warren said the advantage of contingent faculty members’ collaborating to form a union is it brings more people together.

“Anytime you can have more people with more perspectives coming to the table and adding their talents and their voice, it benefits everybody,” she said.

Mauer agreed that having contingent faculty unionize together is a good idea. However, he said there is controversy within the field of higher education about the benefit of this because some believe part– and full-time contingent faculty are better off operating independently.

Delaney said it may not make sense for part– and full-time contingent faculty members to unionize together because they might not necessarily share a common interest.

“The full-time contingent faculty probably have more of a community of interest with the full-time tenured and tenure-stream faculty, mainly because they have full-time jobs. They are probably engaged much more regularly on a day-to-day basis in the lives of students and in the activities of the university,” he said.

Ultimately, Christo said she believes higher education can be made better by promoting the welfare of everybody. Unionizing is a step toward forcing colleges and administrations to do that, she said.

“It’s a good fight, and ultimately, I do believe … higher education in America will become much more effective if they adhere to the principles of social justice,” Christo said.