Cornell professor shares story about being Jewish in Egypt 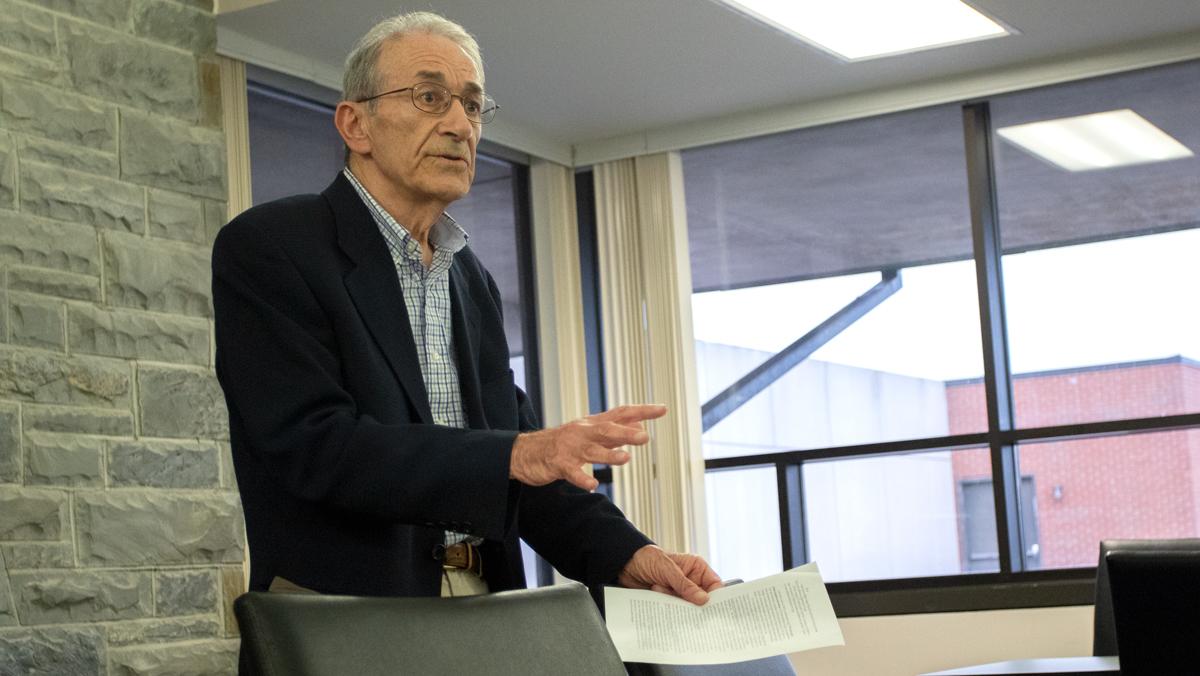 Julia Cherruault/The Ithacan
Claude Cohen, emeritus professor in the Department of Chemical and Biomolecular Engineering at Cornell University, fled Egypt in 1966 as a result of rising anti-Semitism during the era.
By Alex Hartzog — Contributing Writer
Published: September 30, 2018

Claude Cohen, who is Jewish-Egyptian, fled to Paris with his mother and sister during the 1960s, a time period when anti-Semitism throughout the Middle East and Europe was flaring.

Cohen, emeritus professor in the Department of Chemical and Biomolecular Engineering at Cornell University, recently visited Ithaca College on Sept. 24 to share his experiences as a Jewish-Egyptian refugee during the anti-Semitic periods following the end of World War II.

Cohen talked to a group of approximately 30 students and community members in the Taughannock Falls Room of the Campus Center about his experience as a Mizrahi Jewish-Egyptian and the various sects of Judaism in Egypt, which differ from American Judaism communities. Cohen was raised as a Karaite, one of the two main Jewish populations in Egypt, with the other being Rabbinism. Karaitism revolves around the Tanakh being the supreme law of theology while Rabannism accepts the Talmud’s interpretation of the Torah as well.

The discussion is part of an ongoing series hosted by Hillel at the college to showcase diversity within Jewish communities, particularly smaller Jewish communities including the Karaite Jewish-Egyptians. At the event, Hillel also offered traditional Karaite dishes including lentils, spinach and rice, as well as a space for prayer for Sukkot — a festive Jewish holiday that occurs from Sept. 23–30.

Tensions between Arabs and Jews heightened throughout the Middle East, including Egypt, post–1948 when the State of Israel was established in the former British Mandate of Palestine. Particularly in Egypt, Cohen said, he and his family experienced increased anti-Semitism around 1952 after the military coup of the former King Farouk — along with other political turmoil of the region during this era which culminated as a result of European imperialism throughout the Middle East after World Wars I and II — which sparked a rise in Arab nationalism in Egypt.

He said his family fled Egypt in 1966 to escape the rampant anti-Semitism.

Cohen went to American University in Cairo before fleeing with his family. There, he found his passion for interpretation of the Torah, specifically Karaite philosophies and practices.

Cohen spent a majority of the discussion answering questions from the community, explaining what Karaism meant to him and his family, and was only briefly able to discuss his experience as a refugee.

In 1966, Cohen, his mother and his sister fled to Paris to escape anti-Semitism with the ultimate goal of immigrating to the United States. He said his family stayed in Paris for six months in hotels sponsored by Hebrew Immigrant Aid Society, an American nonprofit organization that helps refugees, and with other family members in France.

“I could have come more directly as a student because I had an offer to study at Princeton and other places I had been accepted, but we decided to wait until all three of us got immigration visas,” Cohen said.

Austin Reid, the Springboard Innovation Fellow for Hillel, said he is hosting this series as part of a larger effort to highlight the diversity and complexity within a culture that many view as homogenous.

“A lot of people assume that, ‘Oh, here in America, a large number of Jewish Americans come from Eastern Europe,’ and they think that’s the be-all-end-all of Judaism,” Reid said. “Judaism is a global religion, and this monthly series is designed to really demonstrate the diversity within Judaism and the different places it’s practiced.”

Senior Hana Motoki said she came to the event because it is related to an independent research projecting she is doing on the resettled children of refugee background who have immigrated to the U.S.

“I’ve never really talked to [refugees], besides one person I met in Sweden, about the refugee experience and what that entails,” Motoki said. “So, I thought it would be really cool to get another perspective on someone else’s experience.”

“It was also interesting to hear the difference between the Karaite Jews,” Michaud said. “There were a lot of similarities I got between that and Protestant Christianity, which I have more experience with, and I like the philosophical implication of it.”

The next speaker in the series will be speaking in October on behalf of the Abayudaya Jewish community from Uganda.