The Amorphophallus titanum, a rare plant also known as the titan arum, or “corpse flower,” only blooms once a decade. 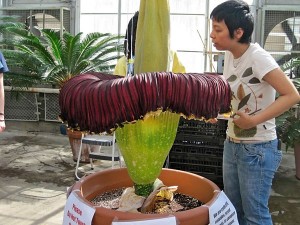 The plant, which can grow more than 10 feet high, also happens to be right here in Ithaca, in the Cornell University Kenneth Post Greenhouse.

The plant seeds came to Cornell in 2002 after they were extracted from a flowering plant at the University of Wisconsin. Carol Bader, the greenhouse manager, has been taking care of it ever since.

The corpse plant gets its nickname from the odor it emits when it is in bloom, which is said to smell like a rotting corpse. The smell is produced when the flowers are ready for pollination. The spadix, which is the tall part in the middle of the flower, emits the scent to attract carrion flies, which are attracted to the smell of rotting meat, in order to pollinate it.

The flowering plant was also recognized in 2010 by Guinness World Records for having the tallest bloom in cultivation.

Louis Ricciardiello of Gilford, N.H., grew a titan arum on his orchards that measured 10 feet and 2.25 inches tall. This broke the previous record, also held by a titan arum, of
9 feet and 6 inches.

Ellen Leventry, press officer for Cornell, said that the smell is one of the reasons that the plant gets so much attention.

Once it unfurls, the plant only stays in bloom for a couple of days. The plant began to bloom at about 1 p.m. Sunday, and was fully open by 6 p.m. It began to wilt as quickly as midnight. The plant, which was christened “Wee Stinky Glen” by voters in an online poll, was almost completely wilted by noon Tuesday.

Caretakers, including Gwynne Lim, a graduate student in the Department of Plant Biology at Cornell, are hoping that the plant will flower now that it has wilted. They collected pollen and will put it in deep freeze for any other institutions or gardens that would like to grow their own titan arum plant.

Leventry said that in the days the plant was in bloom, it drew in about 5,000 visitors. People had also been coming all week, before it was in bloom.

Mary Fisher, an Ithaca resident who came to see the plant, said she had expected a stronger smell, but was still thrilled to see it.

“It’s amazing, just amazing,” she said. “The fact that it only blooms so many years — it’s just once in a lifetime for me.”

Lim, who also helped with the plant’s pollination, said she was excited to see the rare bloom.

For more information about the flower, visit blogs.cornell.edu/arum.