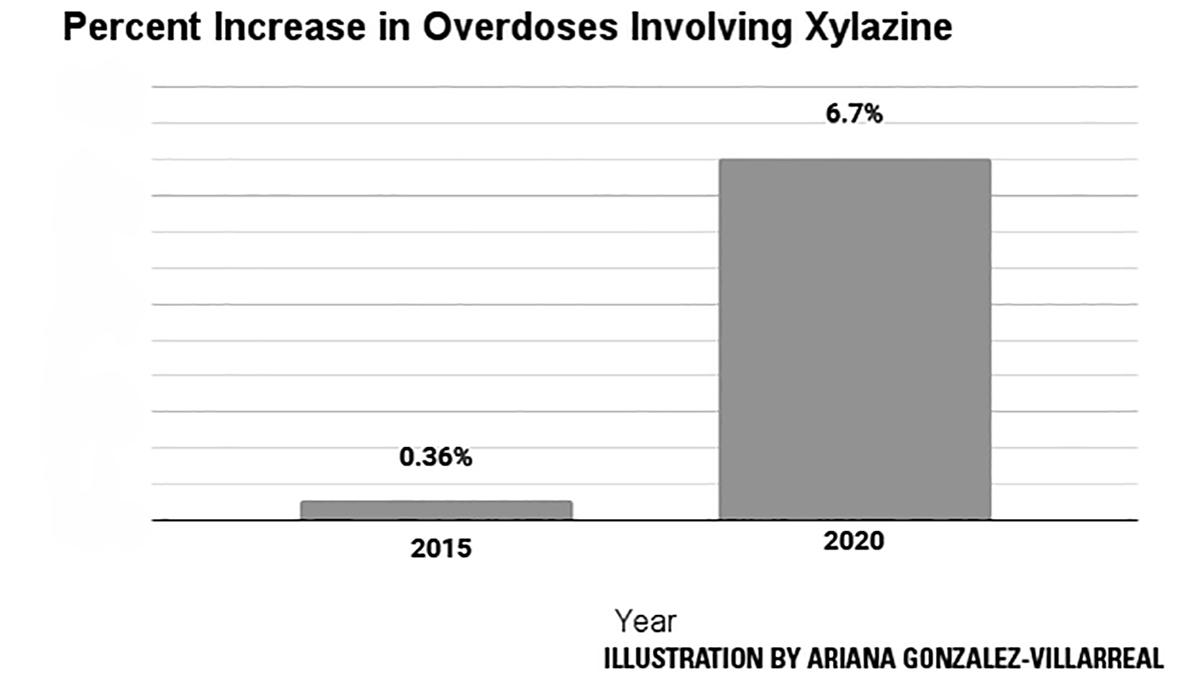 The Tompkins County Sheriff’s Office released a public safety alert Oct. 5 regarding an increase of overdoses within the county because of a new drug, xylazine, also known as tranq dope.

Xylazine, a non-opioid central nervous system depressant, is a sedative used in veterinary medicine that is not approved for humans but has been found in cocaine and heroin supplies. Other central nervous system depressants include alcohol and benzodiazepines. Narcan, also known as naloxone, is a prescription medicine that is used to treat an overdose, but tranq dope requires a higher dose of Narcan. People who overdose on opioids initially receive one spray of narcan into one nostril as the starting dose. Another dose is given after a few minutes if breathing has not returned to normalcy, according to Medical News Today.

According to the National Institute on Drug Abuse, the full scope on how xylazine is impacting the entire nation is unknown, but through research found by the National Institute on Drug Abuse, it is clear the drug has spread westward across the U.S. Another study from BMJ Journals found that from 2010–19, there was a 29% increase in fatal overdoses where xylazine has been detected.

Michelle Goode, program director of the Ithaca College Department of Health Promotion and chair of the Alcohol and Other Drug Prevention Team, said the college coordinates opioid overdose prevention sessions each semester by partnering with community agencies like the Southern Tier AIDS Program.

“It is important to have as many individuals on campus trained in opioid overdose prevention, as this could be a lifesaving intervention for an individual that is experiencing an overdose from opioids, and it is not harmful to individuals that are experiencing other medical emergencies,” Goode said via email. “Naloxone is also available in the buildings across campus in blue bags located with emergency response kits, such as [automated external defibrillators].”

Christopher Teitelbaum, regional director for St. John’s Community Services in New York state, said his team began to witness overdoses where the patient was not responding to the usual amount of Narcan needed to reverse an overdose. Teitelbaum said that while Narcan is still working to prevent fatal overdoses, it takes a higher dosage of the medicine to prevent  xylazine-related fatal overdoses. Teitelbaum oversees operations at the homeless shelter within the City of Ithaca and has a team of people that are trained to use Narcan to prevent overdoses from leading to death.

“I really remember it was this summer that I started hearing that there was something else going on in the heroin-using population and that people were not responding to the normal protocols as easily as before,” Teitelbaum said.

Srikrishna Malayala, chief clinical officer at Inhospital Physicians, said he conducts research on xylazine because of his interest in addiction, an interest he said was formed because of the opioid crisis in Philadelphia, Pennsylvania.

“Don’t use more Narcan than the usual [amount] because if you keep on using more Narcan, [the people who are receiving the Narcan] are only going to withdrawal from the opioids,” Malayala said. “That is going to increase the craving for opioids. … That is one thing that we have learned over time — it is pretty much Narcan resistance.”

Fentanyl is a synthetic opioid that gets added to drugs sold illegally because it makes costs cheaper and makes drugs more powerful and addictive. Because xylazine is not an opioid but is mixed with opioids like fentanyl, it makes using Narcan to reverse the overdose that much more difficult.

Teitelbaum said that when his staff first started experiencing people overdosing with tranq dope in their system, they expressed to Teitelbaum that people were not responding to the Narcan.

“The conversation around it [treating overdoses with Narcan] just started being that people were not coming to as easily, or that they were becoming nonresponsive again after coming to,” Teitelbaum said.

Teitelbaum said that since the drug first started appearing in Tompkins County this summer, it has become common within the population of people who face homelessness and use drugs in the City of Ithaca. Teitelbaum said his staff has become more knowledgeable on how to treat xylazine-related overdoses. The Human Service Coalition found that there are 152 people in Tompkins County that are experiencing homelessness in the 2022 calendar year.

“I think [xylazine-related overdoses] has just become the kind of norm,” Teitelbaum said. “There was a little bit of concern; there is sort of a physiological response like lesions that can happen with people using heroin that has this mixture in it. So we saw a slight uptake folks with that skin condition, but overall I think our experience is that it has kind of leveled off. It’s just part of the background noise now.”

According to the public safety announcement, the impacts of the sedative, like slowing people’s breathing and heart rate and lowering their blood pressure, can compound effects of opioids like heroin and fentanyl.

Tranq dope has caused an increase in overdoses in areas like Puerto Rico, where a study found that over 90% of speedball preparations — a mixture of cocaine and heroin — had tranq dope in it. According to the article, xylazine has been found in 78% of fentanyl within these areas.

A study published in October 2022 in the journal Drug and Alcohol Dependence found that in 10 places across the country, xylazine was involved in just 0.36% of overdose deaths in 2015. But by 2020, the drug was linked to 6.7% of overdose deaths, with the highest percentages in Philadelphia, Pennsylvania; Maryland; and Connecticut. In 98% of all xylazine-related deaths in the study, fentanyl was also used.

Throughout the past year, tranq dope has spread to other states throughout the United States, like Massachusetts and New York. Tapestry, a Western Massachusetts healthcare service that provides services to around 20,000 residents each year, found that in half the drug samples that they were testing, tranq dope was showing up.

Malayala said there is no antidote for xylazine and tranq dope does not show up on urine toxicology evaluations because the drug is so new.

“It is more of a moderate issue than mortality, unless someone is using a lot of tranq,” Malayala said. “It might kill somebody, but as of now, there is no data to say there are xylazine-induced deaths.”