If the sun is out and the temperature is warm, one thing is certain — senior Daniel Weller will be outside. 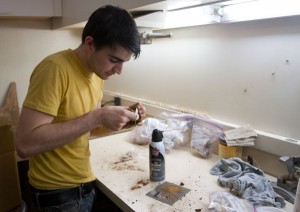 Weller, an anthropology major and biology minor, grew up in the countryside near Annapolis, Md., and from a young age developed a passion for the outside world. Weller spent his childhood far away from televisions. Instead he hiked, played soccer and learned Kung Fu.

“We had to invent our own entertainment,” his sister, Sarah, said. “We used to have this thing where we would climb a tree in our front yard and pretend to be bird-watchers. We would take our parents’ bird-watching book and we would pretend that we saw things.”

His parents’ interest in nature sparked Weller’s enthusiasm for ecology. He said he remembers annual camping trips with his family during the summer. They never stayed at hotels unless the circumstances made it inevitable.

“I stayed in a hotel with them during Hurricane Danny when we were camping in Boston,” Weller said. “They said we should probably go inside.”

His interest in the outdoors and nature also led him to pursue a degree in the sciences, and in 2008 he enrolled at Ithaca College as a biology major. But he wasn’t truly committed to the subject.

In fact, during his time at the college, Weller considered three different majors. But what could have driven most students off track actually enhanced the content of Weller’s résumé.

He has participated in seven different research projects in the fields of anthropology, environmental science, ecology, biology and archeology — two of which have been published in different research journals. The 13 different recognitions and honors he has received while at the college, in addition to his research work at places like the Smithsonian Environmental Research Center and Cornell University, make up his résumé, which is three pages long.

One of his most recent research projects about the role of food in the identity of first- and second-generation Latinos in Ithaca won a national award at the annual American Anthropological Association conference in Montreal in November and a student paper prize from the college’s anthropology department.

David Turkon, associate professor of anthropology, who serves as Weller’s adviser and oversaw his winning research project, met Weller while he was still a freshman. Turkon said he has always noticed Weller’s passion and dedication to his work.

“He is able to take abstract concepts and apply them toward figuring out real-world situations and problems and interpreting them in meaningful ways,” he said. “He takes the bull by the horns and figures things out as he goes, and you see this in the product of what he does.”

However, Weller’s to-do list transcends just his planner — he uses his arm to write memos to remind himself of other deadlines for upcoming projects.

“I do a lot of work, but I have very good time management,” he said. “If you see my arm, I have what I’m going to do today written on my arm.”

Despite spending much of his time in research labs, Weller manages to balance academics, extracurricular activities — and a social life. Senior Margaret Keating, a close friend of Weller’s, said he will take spontaneous road trips, hike trails around Ithaca and hold bonfires at any given time.

“He does a pretty good job balancing all those activities with his social life,” Keating said. “He likes to do things like socially make food together or go hiking together or have potlucks or bonfires.”

Weller is also beginning to look at potential jobs and graduate schools. He applied to more than 30 jobs and has already been accepted to Cambridge University’s graduate school for archeological science. However, Weller said he is considering working or attending other universities and reapplying to Cambridge in two years after saving up.

His father, Donald Weller, a senior scientist at the Smithsonian, said his son’s dedication and ambition will undoubtedly lead him on the right path — even if it is still unclear to Weller what exactly that is.

“He has lots of good options,” his father said. “In some ways, he can’t go wrong.”

Though Weller has had many outstanding moments in his academic career, he said he still believes the best is yet to come.

“Life is made up of a bunch of defining moments,” he said. “I can’t really say there has been one, but I’m sure there will be eventually.”