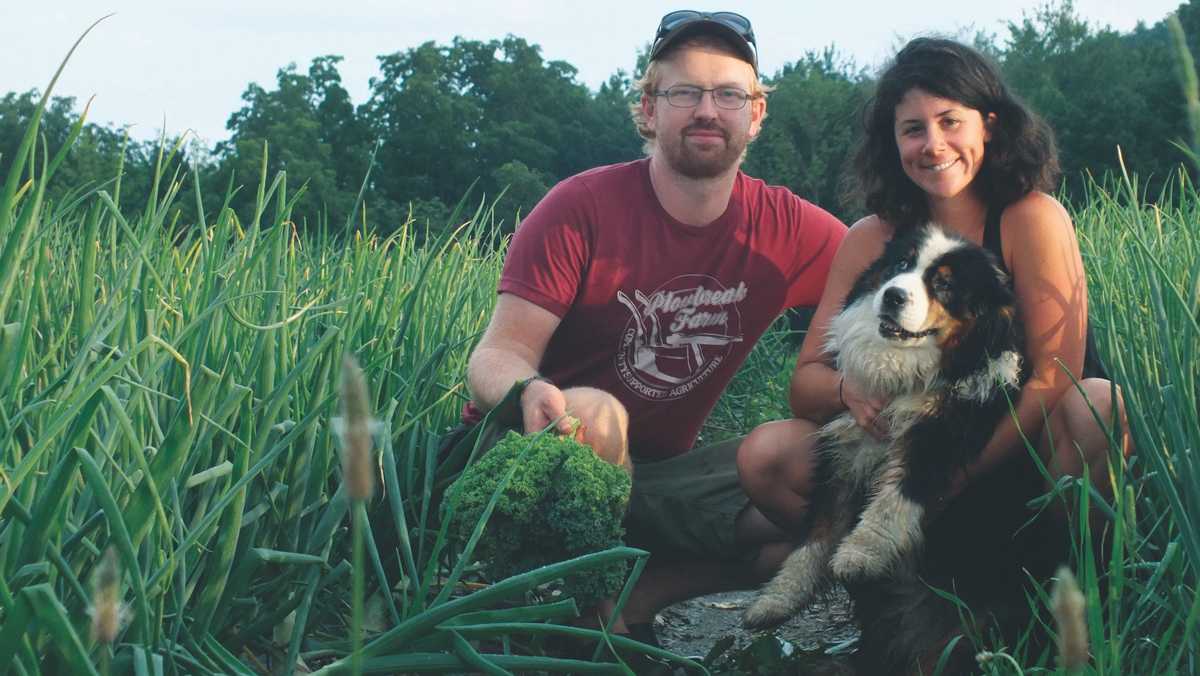 Courtesy of Alexis Self
Kara Cusolito and Aaron Munzer ’08 run Plowbreak Farm, which has been a CSA since 2011. The farm is starting a CSA drop-off location on campus in June.
By Maggie McAden — Staff Writer
Published: April 3, 2018

Ithaca College will soon have a community–supported agriculture drop-off location geared toward students, faculty and staff who sign up for CSA shares with Plowbreak Farm.

Katie Sack, assistant director of employee engagement in the Department of Engagement and Talent Management, said the drop-off location, which will be located on the garden level of the Peggy Ryan Williams Center, will open in early June. Kara Cusolito ‘08, one of the owners of Plowbreak Farm, said CSA members will be able to pick up their produce on Wednesday afternoons.

CSAs are partnerships between farmers and consumers in which subscribers pay in advance for a share of a farm’s harvest, according to the farm’s website. Sack said the location would serve as a place for students, faculty and staff to pick up boxes of produce dropped off by the farm. Plowbreak Farm is located in Burdett, New York, which is about 23 miles from the college. According to the 2017 CSA Directory, compiled by the Cornell Cooperative Extension of Tompkins County, there are over 40 CSA farms in Tompkins County. These offer produce and meat, but also specialty products such as flowers, yogurt, maple syrup and breads.

Cusolito and Aaron Munzer ’08 run Plowbreak Farm, which has been a CSA since 2011.

Cusolito said she and Munzer were both in the journalism program at the college and began dating the summer after graduation. She said that after graduation, they both worked on farms all over the world, including in Hawaii, Australia and Cape Cod. She said they moved back to Ithaca together and eventually purchased land for their own farm.

Cusolito said she and Munzer have been working with Sack and met with her this past winter.

Monika Roth, agriculture issue leader at the Cornell Cooperative Extension of Tompkins County, helped the college become a drop-off site for Plowbreak Farm. She said that CCE reached out to the college after implementing successful drop-off sites at Cornell University for other CSA farms.

“Initially, we contacted them because we had been working with Cornell and have a campus drop-off set up with Cornell through their Wellness program,” she said. “So, that process had been going really well, and so we wanted to expand to Ithaca College.”

Roth said there are two produce drop-off sites at Cornell that were established in 2016. She said CCE is also working to help establish other CSA drop-off locations throughout the community.

Cusolito said having the drop-off location at the college opens up CSA to a new pool of consumers and provides a convenient workplace drop-off site.

Cusolito said the type of CSA share that will be available at the college’s drop-off location is called a box share, meaning that the produce is prepackaged by the farm. She said the other type of share that the farm offers is called free choice. This means consumers show up with reusable bags and can pick what produce they want for the week.

Plowbreak’s CSA members can currently pick up their produce on the farm on Monday evenings, or on Thursday evenings at a market-style stand at The Westy, a bar located in downtown Ithaca, according to the farm’s website. Cusolito said she and Munzer began working with The Westy in 2012 and that this will be their seventh year.

“We really get to know the people that are eating our food, and the money stays in the community,” she said.

Cusolito and Munzer have also been in contact with Anne Stork, assistant professor in the Department of Environmental Studies and Science and manager of the Ithaca College Campus Gardens.

“I really love working with IC students,” Cusolito said. “I feel like IC students tend to be more engaged in the community, and a lot of students we come into contact with are really interested in farms and local foods and the environment.”

Stork said that Munzer and Cusolito have lectured in her classes and that she has taken students to the farm for tours and for labs.

Freshman Hannah Reinhart was hired as a garden student manager for the summer and will be leading a student group that focuses on the planning process for creating an organic garden on campus. She also said she has plans to start up the gardening club again next year.

Reinhart said that she thinks the college’s becoming a CSA drop-off location will help raise awareness on campus about the benefits of local agriculture as well as providing students access to local, organic produce.

“I think it’s really cool that they’re doing it at the school because students need to be exposed to it,” she said. “I think there is a disconnect between the farmers and the buyers, and when you can bring them together, it makes it worth your money.”

Permaculture and organic gardens plant seed of sustainability at IC