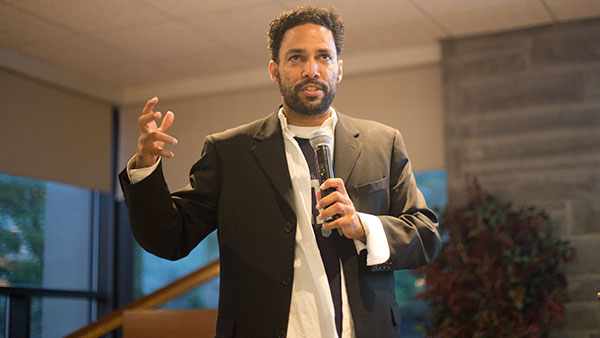 Kecia Romiel/The Ithacan
Adam Banks, associate professor and director of writing, rhetoric and digital media at the University of Kentucky, encourages the audience to utilize social media to voice their opinions and bring attention to social issues of race, culture and ethnicity.
By Aisling Brennan — Contributing Writer
Published: September 11, 2014

The Center for the Study of Culture, Race and Ethnicity invited students to engage in a discussion on the role technology plays in addressing race, racism and resistance on Sept. 9 in Clark Lounge.

The first event in the ninth annual discussion series, titled “TECH N’ COLOR: Technology, Racism, Resistance,” examined the use of technology as a social media tool to oppress or resist racism and explore cultural ethnicity.

According to the CSCRE website, the series promotes the open discussion of the educational impacts underrepresented minorities in the United States face today.

Adam J. Banks, associate professor and director of writing, rhetoric and digital media at the University of Kentucky, and the 2014 recipient of the Young Rhetoricians’ Conference Rhetorician of the Year, spoke at the event about how technology plays a perpetuating role in race, and how it acts as a gateway to activism, especially for the African-American community.

Banks said technology is interconnected with rhetoric, and can help create discourse on race and resistance through social media and other technological media.

“It is not just a tool; therefore, technology and technology issues are a central and an undervalued site for a rhetorical examination and analysis,” Banks said.

Banks said disc jockeys have become the leaders of rhetoric for the digital age through the use of their continuous understanding of the challenges technology causes for different races, cultures and ethnicities when producing music, especially hip-hop.

“In this particular era when we think of the intersection of technologies and discourse, we think about who helps us really understand the complexities of what it means to think through technologies, race, racism, culture, resistance,” Banks said.

Banks said DJs play an important role in understanding the importance of technology and how it can be used to motivate people.

“A DJ has to be a practitioner and someone who thinks about technology systems and their implications, while thinking about technological migration all the time,” Banks said.

Paula Ioanide, an associate professor in the CSCRE, said Banks discussed the ways in which technology and social media can be tools for interaction and engagement within society.

“Technology is what we make of it, and the process of exercising our agency to engage is something that really came across in Banks’ talk,” Ioanide said.

Comparing recent events like the response to the Ferguson case on social media, Banks said major incidents are being affected through the use of technology and people are being “woken up” to social injustices.

“Had it not been for young black folk in Ferguson on social media, it would not have become a national story in the way that it did. It just would have been another black man shot by police,” Banks said.

Banks encouraged the audience to engage in discussions about the world and how it affects them.

“Race, culture, individual collective identities happen and are negotiated through acts of discourse through rhetorical acts, but the exact same thing happens through technology,” Banks said.

Vanessa Dunn, a senior anthropology major who attended the event, said the talk helped her become more aware of the power of social media.

She said using social media can help build a stronger community and spread the word about equality, racism and respect for others.

Ioanide said she hopes the students who attended the event will re-evaluate the way they engage in social media.

“Hopefully, students walk away with a new sense of empowerment about how they can be translators, engage in social media practices or rhetoric-making that promotes a certain kind of worldview or challenges the mainstream way of thinking,” Ioanide said.