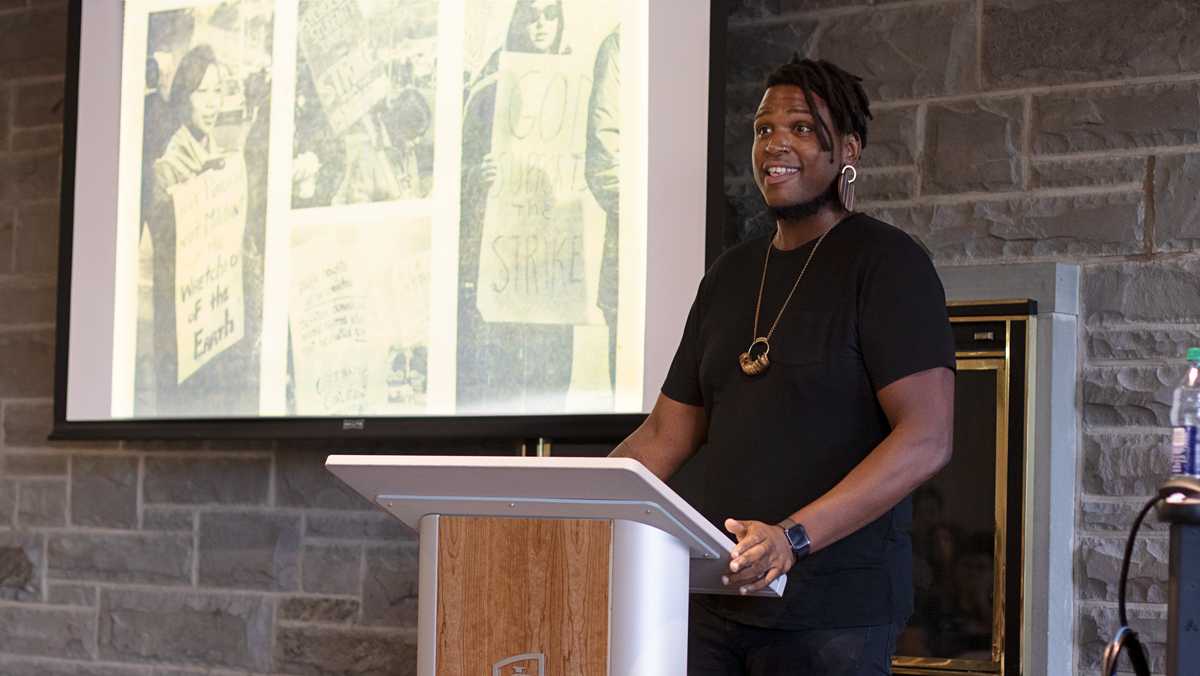 Emily Silver/The Ithacan
Nick Mitchell, assistant professor of feminist studies and critical race and ethnic studies at the University of California, Santa Cruz, spoke at the The Center for the Study of Culture, Race and Ethnicity discussion series Sept. 10
By Olivia King — Staff Writer
Published: September 18, 2019

The Center for the Study of Culture, Race and Ethnicity (CSCRE) is celebrating 20 years at Ithaca College — which coincides with the 50th anniversary of ethnic studies nationally — with this year’s discussion series, “Roots and Routes: Reflecting Toward Change.”

The series will reflect on the history of CSCRE and how it has developed since its inception. Tanya Saunders, assistant provost of international programs and extended studies, said that in the 1990s, a group of students at the college asked for an ethnic studies minor. She said Howard Erlich, professor emeritus in the School of Humanities and Sciences, formed a committee to consider the request. Erlich concluded that the school should think about a program with a larger view of ethnicity, an idea that led to the development of CSCRE at the college in 1999.

Horsley said this year’s discussion series is different from past years because it is not just about the present but, rather, thinking about how CSCRE was created and developed at the college.

Ioanide said the growth of the center can be attributed to students and faculty organizing to expand curricular offerings into Asian American and indigenous or Native American studies.

Saunders said the growth of the center allows students to learn how to discuss social and ethnic issues that are occurring nationally.

“I think we see that race, ethnicity and immigration or migration are important issues in the United States, as they’ve always been,” Saunders said. “We need a center that brings us together to talk about those issues and our connections to them. People try to divorce themselves from those issues.”

Horsley said the first speaker of this year’s series — Nick Mitchell, assistant professor of feminist studies and critical race and ethnic studies at the University of California, Santa Cruz — gave a presentation Sept. 10 on the history of student movements and the creation of the ethnic studies department at San Francisco State. He said the programs address points like segregation, first– and third– world countries and social justice.

A panel discussion and celebration for the center, “Celebrating 20 Years of CSCRE: Looking Back to Move Forward” will take place at 4 p.m. Oct. 11 in Clark Lounge.

Maria Hamilton Abegunde, affiliate in gender studies at Indiana University Bloomington, will also be speaking Oct. 22 at Ithaca College as part of the series. Her talk, “Are You Sure, Sweetheart, That You Want to be Well?,” will focus on healing. Horsley said Abegunde will be teaching a week-long class focused on Black religion and Africana Studies in addition to her talk. Students can sign up for the workshop by emailing Horsley.

Kent Blansett, associate professor of history and Native American Studies at the University of Nebraska Omaha, will present “Think Indigenous: Richard Oakes and The Red Power Movement” at 6 p.m. Dec. 5 in Klingenstein Lounge.

Horsley said students usually find value in the discussion series because it brings what they learn in the classroom to life by hearing the scholars who come to campus and talk about their work.

“I think the discussion series recoups and redresses those kinds of gaps and holes that exist,” Horsley said. “It’s not just IC. This is across the nation.”