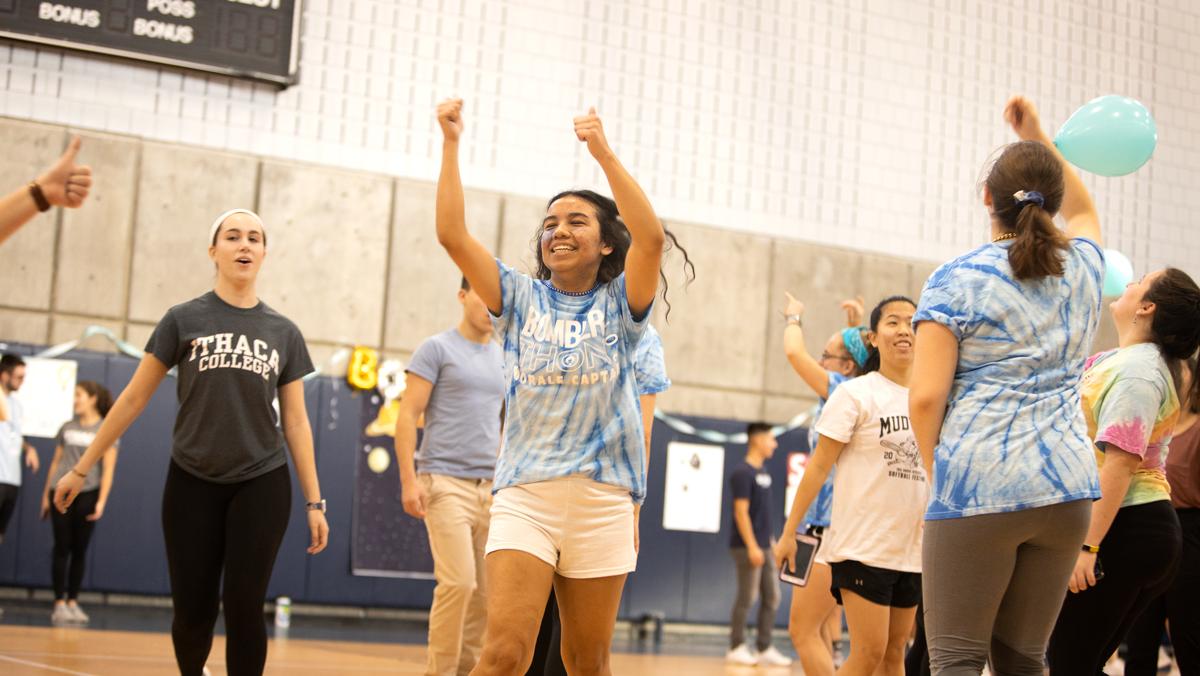 In December 2019, Ithaca College BomberTHON held its first fundraiser by holding a six-hour dance marathon. Although the event will be held virtually this year, the main focus — raising money for the Upstate Golisano Children’s Hospital in Syracuse, New York — has stayed the same.

BomberTHON is a student-run organization that works to raise money for children with cancer through a six-hour–long dance marathon. The college’s first Miracle Network Dance Marathon was held in person in Fall 2019 and raised $28,233.22 for Upstate Golisano Children’s Hospital, a Miracle Network Hospital. This year, instead of holding an in-person dance marathon, BomberTHON is holding virtual events from 10 a.m. to 4 p.m. April 10, which includes six hours of activities and fundraising. Students must register on the BomberTHON website to attend the events.

The event will begin with a morale dance, which will take place every hour, trivia and cause connection — videos of children speaking about their experiences at Miracle Network Hospitals. During the second hour, which has a beach party theme, there will be a rubber ducky derby and a Miracle Kid talent show. Students will donate to sponsor a rubber duck, which will be floated in the Kelsey Partridge Bird Natatorium, said senior Laura Heppes, executive director of BomberTHON. The top three winners will receive a cash prize, Heppes said.

There will be a fundraising power hour and a live performance from Chris Washburn, a local Ithaca DJ, during the third hour, which is glow-in-the-dark themed. Lunch and a TikTok competition sponsored by Ithaca Hummus will occur in the fourth hour. During the fifth hour, there will be Zumba led by second-year graduate student Jaleel Green, group fitness instructor, and a build-a-buddy event. The theme will be color wars.

The build-a-buddy event consists of the top 100 fundraisers assembling a stuffed animal that has a BomberTHON shirt, said senior Thomas Edson, director of operations for BomberTHON. Miracle Children will be assembling the stuffed animals with the students.

“It kind of brings everyone back to their childhood, of going to Build-a-Bear,” Edson said.

The event will end after the sixth hour, which will include a special celebrity shout-out and the reveal of the total amount of money that has been raised.

Most of these events will take place over Zoom or will be livestreamed. Edson said there will be a PowerPoint presentation, which will include prerecorded performances from student organizations like Premium Blend, Pitch Please and IC Defy, videos from families involved in the Miracle Network and videos from hospital staff. He said the organization’s Instagram will be used to promote the events as they happen.

Edson said the organization pushed the dance marathon back to the spring in hopes of holding some in-person events, but by December 2020, it became clear that the event would have to be held online.

“We’ve kind of had to drop the idea of a dance marathon, in a way,” he said. “Sitting there on Zoom playing music, waiting for people to dance seems painfully awkward. … We’ve had to come up with ideas that are just as engaging.”

Heppes said that transitioning the dance marathon to a virtual event took a lot of planning.

“We had to think about it a little differently,” she said. “A huge part of the dance marathon experience is getting to be in person and seeing the final fundraising total with everyone. … Usually we have music going; everyone’s dancing and doing activities. Thinking of a way that everyone can do that in their own space, we had to take more away from the active part and think about other things we can do.”

The number of attendees who are going to the event has decreased from two years ago. Senior Lynzie Burmeister, vice president of membership for BomberTHON, said there are 164 registered attendees for this year’s event, a decrease from the 214 students who attended in 2019. However, Heppes and Burmeister said they are confident they will reach their goal of $25,000.

Edson said the virtual events allow for a greater focus on those who BomberTHON is raising money for.

“This year, we feel like we can really do a good job of hammering home the cause — connection with hospital staff, talking about their roles and how the money that we are fundraising helps them operate … and also the Miracle families sharing their stories,” Edson said.

Junior Alexa Bastardi, service chair for Gamma Delta Pi (GDPi), a social service sorority unaffiliated with any larger branch of GDPi or Ithaca College, said that in 2019, the dance marathon was one of the sorority’s main events.

“We can’t really do as many in-person service events than we usually do this semester, so I wanted to find an online event that everyone can get involved in,” she said. “So we decided to do BomberTHON. … It’s something that everyone’s really passionate about.”

She said the sisters have been reaching out to family and friends and have been focusing on raising money through social media.

“I knew that it was going to be hard to fundraise because we are in a pandemic,” Bastardi said. “We started with our own goals. I set a lower goal for all of us because it’s difficult to ask for money nowadays. … I said, ‘This is our goal.’ We started out at $100, and next thing you know, we’re at $1,630.”

As of April 7, GDPi is in the top four teams that have been raising money for the event.

Senior Natalie Yesner, co-director of event operations for BomberTHON and vice president of GDPi, said she is looking forward to the rubber ducky derby.

“Yesterday I bought a pack of four, and I named them,” she said. “I’m really excited. … Even if you don’t bet on the ducks, it’s still just fun to watch.”

Bastardi said the sisters will be attending the fundraising power hour, and she has been pushing people to attend the Zumba session as well. She said she hopes everyone will get involved as much as they can.

Yesner said she is thankful for the Ithaca and the college communities for their donations and support.

“I know this year has been a challenge for so many people — the whole town, community,” Yesner said. “Every donation counts, especially for those families and children in the Miracle Network.”

Students must be vaccinated to return to campus for Fall 2021