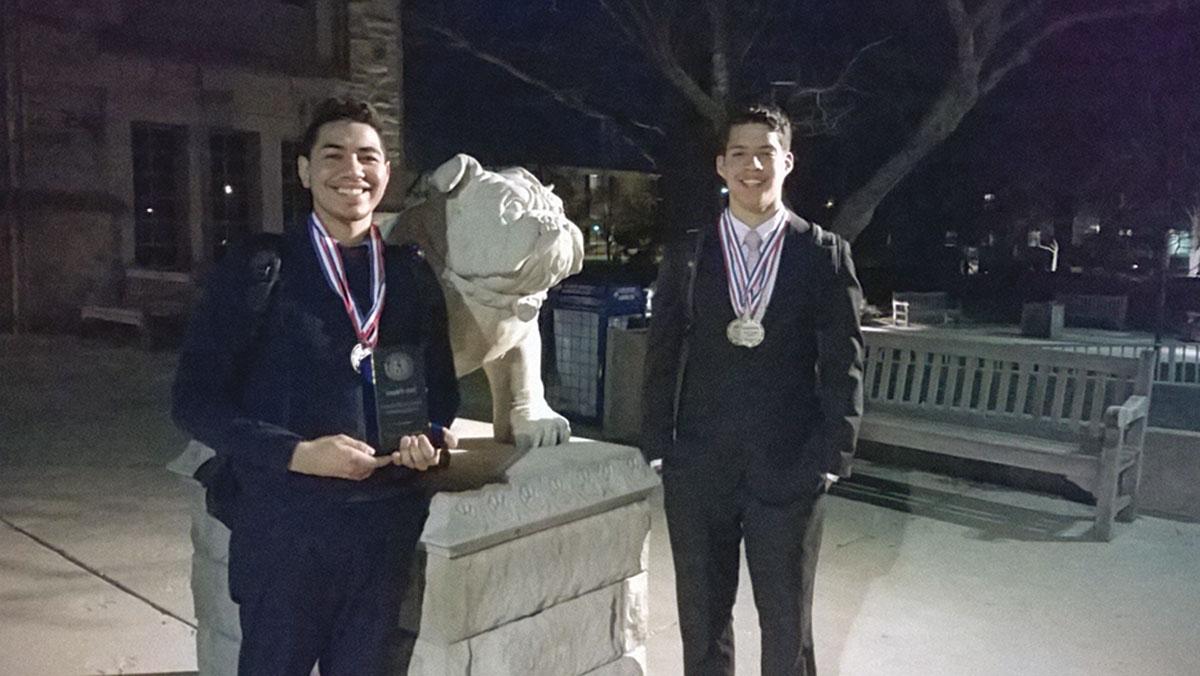 Two members of the Ithaca College debate team achieved high ranks at a national tournament while arguing the merits and drawbacks of the United States’ government developing lunar resources.

Sophomores Charlie Vaca and Jose Escano both advanced past the preliminary rounds of the Novice National Championships at Butler University in Indianapolis, which featured debaters with less than one year of experience from 30 different colleges and universities from March 13–15. Escano reached the semifinals of the tournament, while Vaca reached the quarterfinals. Overall, the team finished fifth out of 11 Division III schools despite the fact they only had two competitors while most teams had about 10. The Ithaca College team has about 20 members, but has gone to nine tournaments this year and only had the budget to send two members to Butler.

Vaca and Escano both argued that creating title turbines under the ocean would be the best way to develop lunar resources, Escano said. Other participants proposed going to the moon to mine helium-3 or building a telescope that would be able to detect incoming meteors.

Escano was awarded a “best speaker” award for his style of debating, finishing in fifth place out of 25 competitors.

“A lot of the judges were telling me I was charismatic, that the stuff I was telling them was actually plausible, that I made it seem like these things could actually happen,” he said.

Vaca finished fifth out of 50 participants in a special impromptu sales competition. For this competition, participants were given a slip with a product to sell and then had nine minutes to prepare and present a sales pitch for the product. He said it was an even playing field because no one else had experience with the event.

“It just came down to who spoke better, who was funnier, who was able to prove their point and convince the judges that they should actually buy this product,” he said.

Scott Thomson, assistant professor of communication studies and the coach of the debate team, said he had confidence that Vaca and Escano would do well at the tournament.

“The kids were very well prepared, they had done practice debates and the case we used was very good,” he said.

Vaca said he also thought he and Escano were well prepared.

“Considering what we had done all year, we expected to do well at the tournament,” he said. “It was the thing we had been working on all year.”

The tournament was held in Lincoln-Douglas style, meaning the debaters prepared arguments for and against lunar development and argued both sides during different rounds of the tournament. The other style that the debate team often does is called World University Debate, Thomson said, in which arguments are not known beforehand and are more spontaneous. Also, Lincoln-Douglass debates are individual competitions while world-style debates feature teams of two.

Vaca said he enjoys the Lincoln-Douglas style as he likes to frustrate his opponents by asking tough questions, and there is a clear way to win, unlike in world-school style.

“Worlds just comes down to the judge’s perception, but in Lincoln-Douglass all the judges will agree on a reason that you win,” he said. “It will be clear — either you will show that you couldn’t solve the problem, or the opponent said there was a big disadvantage and you couldn’t say anything about it.”

Although Escano said he was prepared with his argument for lunar development, debating against the other team’s plans was difficult.

“You had to be prepared for anything, you never know what people were going to come up with,” he said. “The affirmative could come up with anything out of nowhere. We had to have negative cards [to refute] literally any argument they could make.”

Thomson said the team had a very successful season, including a quarterfinal finish at the Pan-American Universities Debating Championship tournament hosted by University of Miami in January by the team of junior Sean Themea and senior Tiffany Ruff. Thomson said there is a debate at Colgate University on March 27–29, which is the final debate of the season. Next season, Ithaca College will be hosting the North American Universities Debate Championships for collegiate debate, which Thomson said he is excited about.

Vaca said he has high hopes for the future of the team as they are young and will return many members next year.

Thomson said he has high hopes for both Vaca and Escano.

“They both sure have shown that they are willing to practice and work hard, so they will definitely win more tournaments,” he said. “They’ll do very well.”