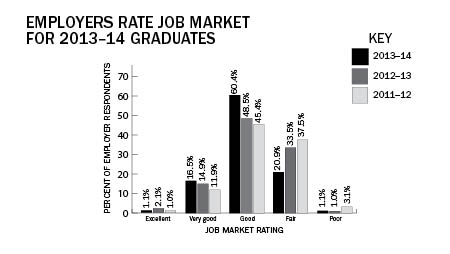 Several studies project a positive job outlook in 2014. Employers are planning to hire 7.8 percent more graduates in 2014, according to a recent study by the National Association of Colleges and Employers. The study shows a continuous slow growth, despite a flat job market that only improved by 2.1 percent last spring.

According to the Bureau of Labor Statistics November jobs report, unemployment declined from 7.3 percent to 7 percent this year, and 203,000 jobs were added to the economy in November while 200,000 were added in October.

According to the NACE study, the degree for new hires that is most in-demand is the Bachelor’s degree, indicated by a 78.4 percent response from research respondents. It is followed by the Master’s degree with 15.7 percent demand. The top majors in demand include business, engineering and computer and information sciences. Communications is ranked fifth in popularity, and degrees in liberal arts hold the sixth spot.

However, John Bradac, director of Career Services, said other majors should not be discouraged. The popularity of some majors does not affect the growth of others, he said. He also said Career Services has noticed the improving job market and with it, the growing interest from employers to recruit at the college. Last year, 3,777 job and internship opportunities were listed through Career Services. That number has been steadily increasing in the last few years. In 2008–09, there were 2,795 listings.

“These employers that are surveyed, 3,000 employers, intend to hire an additional 7.8 percent,” he said. “Bottom line is, if you were to read trends, this is an outstanding time to be graduating, and, in fact, the job market has become very positive.”

Many students like senior Marissa Osowsky graduate early primarily because it made financial sense.

“There wasn’t really any reason to spend another $50,000 just to stay here, when I could graduate early and then potentially spend the next couple of months getting a job and getting paid,” she said.

According to studies by the Institute for College Access and Success, seven in 10 college graduates in 2012 had student loan debt with an average of $29,400. Since 2008, the average amount of debt has been steadily increasing 6 percent every year.

However, Osowsky also said money should not be the only consideration driving the decision to graduate early.

Bill Conerly, an economist and Forbes Magazine contributing writer, said graduating early in December could pose some advantages in giving early graduates an advantage in the job search.

“It’s probably a good idea to get a head start because there is competition, and right now there is less competition from recent college grads than there will be in June,” he said.

Conerly also said some job opportunities have a strict schedule, and they only recruit in the fall or in the spring. Students have to assess what works best for the industry they are in.

Senior Rebecca Billings, who will graduate this weekend, had no financial motivations behind her decision. She said she simply wanted to leave the structured college education she was getting in the classroom.

Next semester, instead of being a college student, Billings will be going to India for a month to work in an eco-village. She will then work on a documentary in Canada for three weeks before going to Europe for 2 1/2 weeks.

“I really like learning, but I like to be able to expand my knowledge on my own terms, with experiences and not just with classes,” she said.