Decreased enrollment in humanities affects IC and the nation 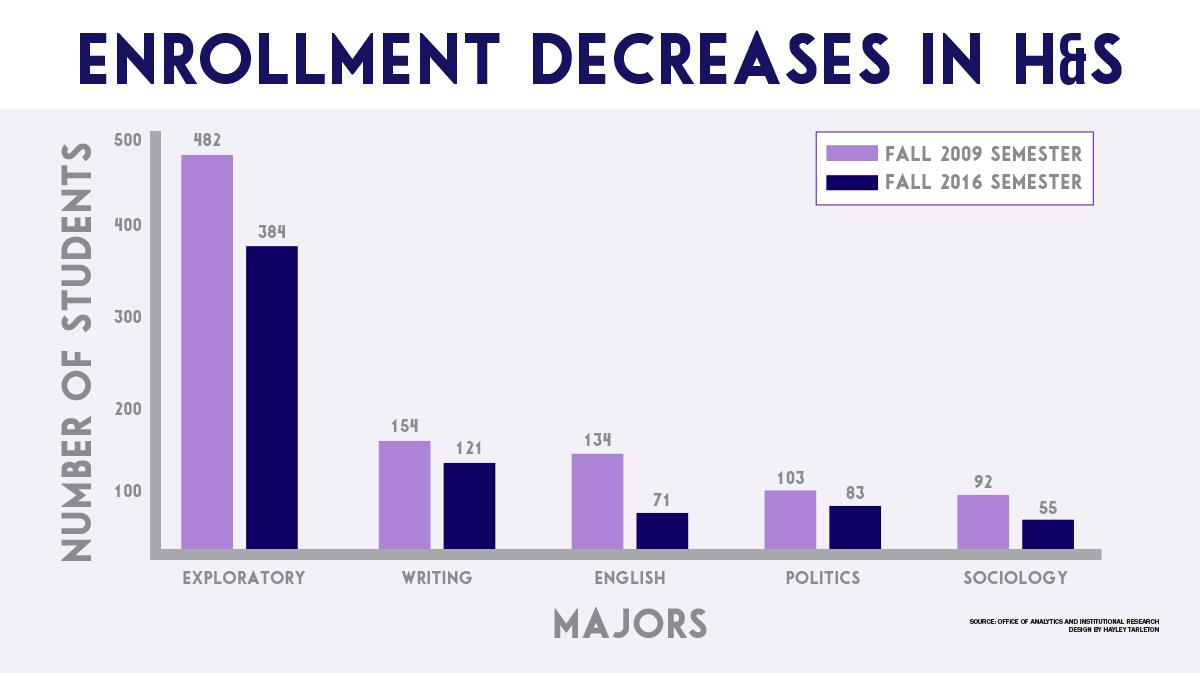 Multiple majors within Ithaca College’s School of Humanities and Sciences have seen decreased enrollment over the past 10 years, which is often attributed to the financial burden of college and the stereotype that humanities graduates do not earn high-paying salaries.

Elizabeth Bleicher, directory of the exploratory program, said the drop in enrollment numbers is most likely due to the 2008 economic recession and because parents are reluctant to send their child to expensive institutions without a guarantee of a return on investment. The exploratory program, for example, went from 482 students during the Fall 2009 semester to 384 during the Fall 2016 semester, according to the Office of Analytics and Institutional Research. This trend is seen throughout many other majors housed in H&S as well, such as English, history and writing.

“The exploratory program’s enrollments bottomed out in direct correlation to the economic crisis because families were reluctant to send their child to a private college if their child did not have a major,” Bleicher said.

This trend of lower enrollment in the humanities has also been observed nationally. According to the American Academy of Arts and Sciences’ Humanities Indicators, the completion numbers for bachelor’s degrees in the humanities — English, history and liberal studies — have been declining since 2009, whereas completion of degrees in the natural sciences has been rising since 2005.

Cory Brown, associate professor and chair of the Department of Writing, said the faculty in H&S are aware of the issue of decreasing enrollment and that the cost of college plays a large part in students’ decision to pursue liberal arts degrees.

“It’s common knowledge among all of us in H&S that this has been a trend in the past 10 years,” Brown said. “Higher education is so expensive, and I think people are looking at the cost and saying, ‘Is this really worth it?’”

“We have to watch out for the number of 300-level courses that we offer because we don’t want to over-offer, and we want those courses to fill, so we have to be careful we don’t offer too much,” Brown said. “That’s actually been an issue in the past couple of years, where we’ve had to cancel some sections because they were underenrolled.”

Dan Breen, associate professor and chair of the Department of English, said that while he is not sure why the decrease is happening, he does think the stereotype that students who graduate with humanities degrees do not earn much out of college plays a role. Enrollment in the Department of English has decreased from 134 students during the Fall 2009 semester to 71 students during the Fall 2016 semester, according to institutional data.

“There are a lot of guesses people have,” Breen said. “There is an increasing emphasis on conceiving of a postsecondary education as something that has a specific professional utility; that is, if you go to college and you decide to major in art history, there is the question of ‘So what are you going to do when you graduate? Does that translate into a white–collar job?’”

Michael Bérubé, director at the Institute for the Arts and Humanities at Pennsylvania State University and former Modern Language Association president, said that while those who graduate with humanities degrees enter lower-paying jobs, over time, this becomes less of an issue. Over the course of 30 years, there is no difference in earnings between an English major and any other major, Bérubé said.

“Where it does hurt having a more liberal arts major is right after graduation — it’s the first five years,” Bérubé said. “And I think when you get student debt at the level we see now, you’re putting a lot of pressure on students to get a good–paying job right out the gate.”

Vincent Wang, dean of H&S, shared similar views for why humanities majors have declined at the college and nationwide.

“The liberal arts–education model has faced increased financial scrutiny,” Wang said. “IC is no exception to this national trend.”

Wang said that to combat the loss of students, H&S should expand the sources of students — for example, recruiting more international students. He also said the educational experience should be more distinctive, with faculty-mentored research or internship opportunities, and the college overall should accept more students.

Robert Townsend, director of the Washington, D.C., office for the American Academy of Arts and Sciences and project staff for Humanities Indicators initiative, said another possible reason for the decrease is that before entering college, students take dual–enrollment credits and AP classes. As a result, he said, fewer college students need to take introduction courses in the humanities, which can help serve as pathways into humanities majors.

Senior Hana Mastrogiacomo said as a theater studies major, she understands that she will not have many job prospects and that people believe getting a job is more important than doing something one is passionate about.

“If I had majored in something else, I would have had an applicable job, but because I majored in theater and sociology, pickings are slim,” Mastrogiacomo said. “I definitely know a lot of conservative people who think that you should only study very tactile, applicable things, and yet they want the skills and passions of those who study the humanities. I can’t change a policy literally with a play I put on, but the world needs people like me.”