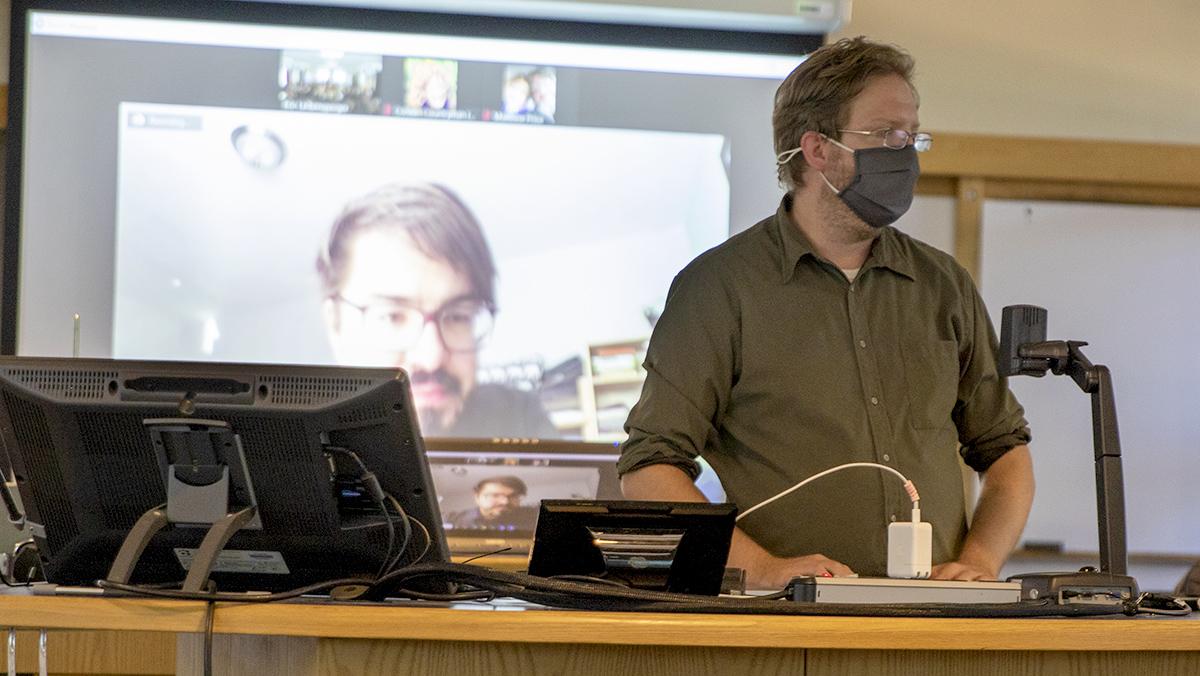 Thomas Kerrigan/The Ithacan
Wythe Marschall, Ph.D. candidate in the Department of the History of Science at Harvard University, spoke to Ithaca College students and faculty about the lack of inclusion of scientific knowledge from marginalized communities.
By Elizabeth Kharabadze — Contributing Writer
Published: October 20, 2021

Wythe Marschall, Ph.D. candidate in the Department of the History of Science at Harvard University, spoke to Ithaca College students and faculty about the lack of inclusion of scientific knowledge from marginalized communities.

The Department of Physics and Astronomy Seminar, “Defining, Globalizing, and Decolonizing the History of Science: Reflections and Open Problems,” took place Oct. 19 in the Center for Natural Sciences. Marschall spoke virtually to about 21 members of the campus community regarding the limitations of science, as defined by European and American standards.

Marschall said the history of science as it is known should become more objective in its explanation of scientific knowledge systems. He said there were several cases in history in which scientific ideas from marginalized, non-Western communities were often overlooked — like the separation of traditional Chinese medicine, a branch of Chinese medicine which encompasses a range of health and healing practices, from biomedicine, a branch of Western medicine that combines biological and physiological principles to clinical practice.

“So if science is unitarian transhistorical, how do you explain sudden shifts?” Marschall asked. “There might be an issue with sort of assuming that there is this one view of reality that we are all just working toward.”

When examining the history of science, Marschall said it was important to look at three models of scientific philosophy. The first, epistemic paternalism — the withholding of evidence from someone without their consent — comes from the idea that the interference in the inquiry of others could be considered justifiable. Second, epistemic diversity — the ability to produce rich and diverse knowledge — takes into account the scientific discoveries of marginalized communities in order to produce a more diverse understanding of the world. Third, epistemic decolonization — the critique of the colonization of knowledge — calls into question the prevalence of the Western knowledge system and seeks to give marginalized communities a say as to what is considered science.

“The history of science has often been taught for a long time as unitary, so there’s one thing called science; we sort of know it when we see it,” Marschall said. “Transhistorically, that thing itself doesn’t really change, although we gain more knowledge about it … it’s generally performed by people who have more money than other people; more social status. It’s often masculine and it’s often white.”

Marschall said that while there were no definite ways to ensure a complete redefinition of what is and is not counted in the history of science, much of the work begins with education. He said universities must not only begin to re-evaluate the material that is being taught in science classes but also re-evaluate the ways in which that material is being taught.

“It’s hard because you are in a building in an elite university, and … even if you’re in a circle, you’re still sort of in a position of epistemic authority,” Marschall said. “So there’s some of that sort of paternalistic work that happens in universities that we’re all accustomed to.”

Senior Antara Sen, who helped organize the event, said they enjoyed learning about the ways in which many scientific discoveries have been overshadowed by elitist standards of academia.

“I think that talking about these issues helps illuminate to younger students that there isn’t just one way to be a scientist,” Sen said. “Science truly is the all-encompassing act of ‘making knowledge.’”

Sen also said they agreed with Marschall’s point on epistemic paternalism and that it was an idea that could be applied beyond science.

“The idea that one race supersedes all others to the point that other races need their help to survive has existed for millennia,” Sen said.

Eric Leibensperger, assistant professor in the Department of Physics and Astronomy, said he was pleased the seminar was able to draw attention to the impact of colonialism in the field of science.

“While a lot of what we teach is derived from [Western scientists], there’s a whole wealth of information and knowledge out there that we might not be exposed to and be using to its best ability,” Leibensperger said. “I think it’s a really powerful message to be able to realize there’s much more out there and that there’s much more that we can do to give credit where credit is due.”

Leibensperger also said there should be more consideration into the way science is taught. He said that while science is taught in a linear manner, it did not reflect the extent of scientific discovery throughout history.

“There are leaps and bounds; discoveries and all of those things so there are big, monumental moments,” Leibensperger said. “Progress is almost always happening to some extent.”