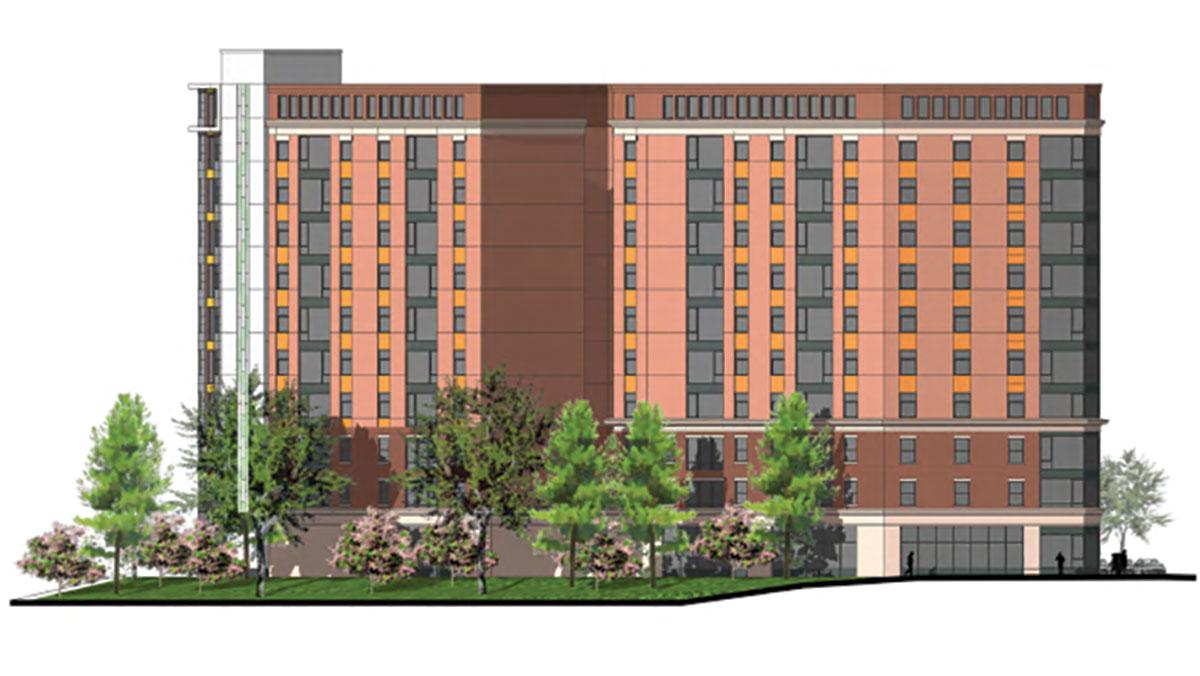 Courtesy of City of Ithaca
The State Street Triangle mixed-use residential building, proposed by Campus Advantage, will be built across the street from The Commons.
By Faith Meckley — Assistant News Editor
Published: September 2, 2015

A Texas-based developer is moving forward with plans to transform a one-story building at the corner of E. State Street and Aurora Street into a $40 million, 11-story mixed-use residential building marketed toward students.

Campus Advantage, based in Austin, Texas, is developing the project, which would include 240 units capable of housing about 600 people. Founded in 2003, Campus Advantage became the nation’s largest operator of privately owned residence halls in 2007. In addition to housing, the building would also include restaurant and retail space. Rent will be between $900 and $1,400 per month per unit, according to the project’s website.

The company is currently seeking approval from the City of Ithaca’s Planning and Development Board, which has raised concerns about the size of the building. The zoning of the site was changed in 2013 to encourage density and development, raising the height allowed from 60 feet to 120 feet, or 12 stories.

At the June 23 Planning and Development Board meeting, board members called the project a “visual canyon,” “inappropriate” and something “made for Broadway” rather than State Street. Board member John Schroeder said the project had “no consideration for urban fabric.” Concerns were also raised that the building would cast a shadow over the street and the newly completed Commons.

Mark Darling, the liaison between the Planning and Development Board and the Department of Public Works and the sustainability programs coordinator at Ithaca College, said the proposal has been adjusted and re-presented to the board three times since its first proposal in April. He said the developer has begun to address some of the concerns raised by redesigning the facade of the building to make it more appealing and by submitting a proposal to expand the pedestrian space around the building. However, the developer needs to go further, Darling said, to address the mass of the building so the street isn’t cast in a constant shadow.

Scott Whitham of Whitham Planning and Design, the project consultant, said the company is in the process of addressing concerns about the mass of the building.

“As you come down State Street and Aurora Street, it’s one of the gateway projects,” Whitham said. “This project is so very visible and with such a dramatic change to that site, there’s a lot of tension around the project.”

The project also heard concerns from Ithaca residents because of the number of students it would bring into the downtown area.

Darling said he thinks the residents who expressed concerns over the influx of student residents have the wrong idea of what students do.

“They assume college is [a] big party,” Darling said. “I say to them, ‘You haven’t been around students lately. You’re thinking about what a dorm was in the ’70s versus what a dorm is like now.’”

In response, the original proposal with 210 units was adjusted to 240 units, converting 10 four-bedroom units into 40 studio apartments to appeal to a more diverse set of residents.

“The mix of unit types has changed in order to address the concerns of the community that the project is poised to be a ‘student dorm,’” Whitham said in a letter to Lisa Nicholas, senior planner in the Department of Planning and Economic Development. “This modified unit mix was made to accommodate a mix of people, including young professionals looking to live downtown.”

Darling also said offering more student housing downtown would soften the market on South Hill and allow more houses to be open to families and college staff and faculty, and it would encourage houses to be better maintained than they are now by “nonexistent” landlords.

“I like it particularly because that should allow South Hill to go back to single family homes rather than becoming a student ghetto,” Darling said.

Despite concerns over the project, Darling said he would like to see the project — which he thinks will attract more students from the college than Cornell University students — become a reality.

“It’s going to increase density downtown,” Darling said. “The Commons is going to come alive in the evening rather than shutting down.”
Whitham said he expects to receive approval from the Planning and Development Board in the fall. The site plan review for the project, submitted by Michael Orsak, senior vice president of investments at Campus Advantage, states that the company plans to start construction in January 2016 and finish in August 2017.