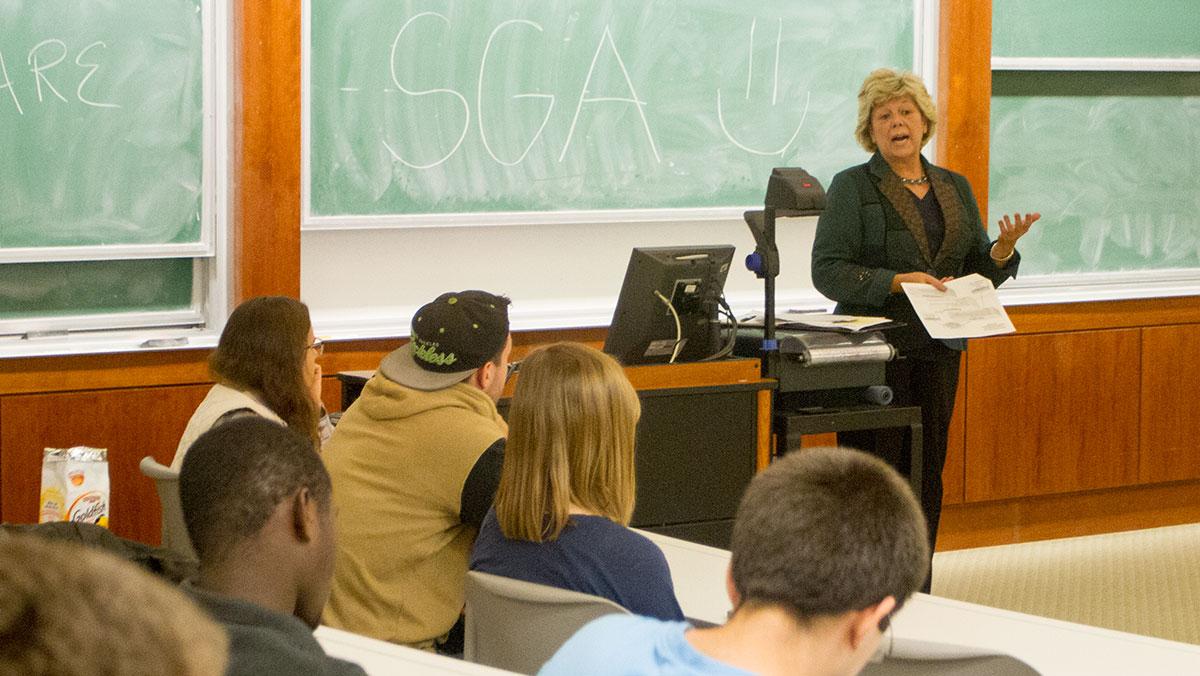 Terri Stewart, director of the Office of Public Safety and Emergency Management at Ithaca College, addressed the Student Government Association Sept. 21 and challenged the SGA to work with her office to continue a bill passed last semester by the SGA focused on holding Public Safety accountable.

The bill, called “Police Enforcement of Accountability for Civilian Engagements,” was sponsored by Class of 2015 Senator Taj Harvey ’15 and passed through the SGA senate March 23. The Ithacan reported last semester that the bill “recommends a number of changes in the way Public Safety interacts with the college community, including more transparent and effective communication between Public Safety and individuals who submit complaints. The bill also calls for Public Safety officers who have received multiple complaints against them to be ‘supervised and psychologically evaluated on their efficiency to perform the tasks required of them.’”

Senior Dominick Recckio, president of the SGA, said interested SGA members will meet with Stewart and present a more nuanced and researched bill to the SGA senate for approval.

Stewart said she believes in engagement and accountability between Public Safety and the campus community and wants to start the semester by working with the SGA to get its Public Safety legislation from last semester off the ground and passed through the new SGA senate as a more collaborative bill.

“That’s one of the biggest reasons I’m here tonight,” Stewart said. “I need to know that SGA’s going to pick this up … [and] someone’s going to go through this with me and members of my team.”

Pradhan said she wants to use her future meetings with Stewart to bring up discussion points students of color have been talking about regarding Public Safety and racial bias. She said she feels many African, Latino, Asian and Native American students’ perspectives on campus policing aren’t being heard by Public Safety.

“That’s why I picked up [this] bill, because a lot of people in the ALANA community are talking about what they want, and Terri Stewart’s not really responding, and she’s coming to us instead, as if we [the SGA] would have the solution,” Pradhan said.

Stewart did discuss an initiative she said has been underway for 18 months and is attempting to create a more conducive relationship between ALANA students and Public Safety. The initiative is part of a four-point diversity, inclusion and engagement plan developed in partnership with representatives from the Office of Human Resources and the Office of Student Engagement and Multicultural Affairs.

Stewart also discussed the college’s Sexual Harassment and Assault Response & Education program with the SGA and resources students have in cases of sexual harassment, assault, stalking and other cases of sexual violence.