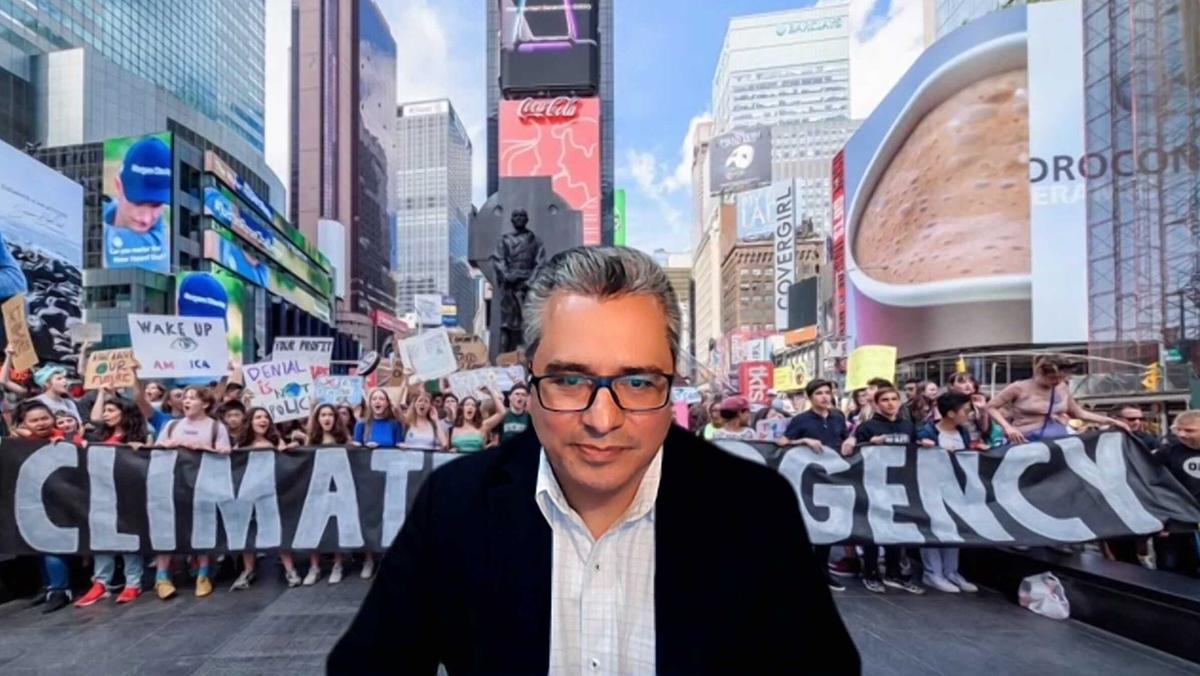 Courtesy of the Ithaca College Center for the Study of Culture, Race and Ethnicity
The talk was led by guest speaker Luis Aguirre-Torres, director of sustainability for the City of Ithaca. Aguirre-Torres highlighted the importance of building community and intersectionality in the fight for climate change throughout his presentation
By Lorien Tyne — Staff Writer
Published: November 3, 2021

Members of the Ithaca community engaged in a virtual conversation Nov. 1 on the topic of climate justice and the implementation of the Ithaca Green New Deal. The talk was led by guest speaker Luis Aguirre-Torres, director of sustainability for the City of Ithaca.

The virtual event held over Zoom was part of the college’s Center for the Study of Culture, Race and Ethnicity (CSCRE) Fall 2021 discussion series titled, “Racism, COVID and Climate Change: Negotiating the Effects of Interlocking Pandemics.” The series focuses on how systemic racism, the COVID-19 pandemic and climate change intersect and the initiatives people are creating to help improve communities, land and resources. For this talk, Aguirre-Torres was joined by 34 other participants including faculty, students and community members.

The first version of the Ithaca Green New Deal was unanimously approved by the City of Ithaca Common Council June 5, 2019. The current version of the deal, which was updated during summer 2021, simplifies its priorities with two focuses: by 2030, Ithaca plans to be carbon neutral as well as ensure everyone in the community benefits from the changes to reduce inequality.

Aguirre-Torres highlighted the importance of building community and intersectionality in the fight for climate change throughout his presentation.

“We can decide that, you know, we have a Green New Deal that’s going to cost $2 billion,” he said. “We can perhaps redirect not only 40% but 50% of the benefits to those communities, to climate justice communities, those that have been left behind for a number of reasons.”

Aguirre-Torres directed questions about getting involved with the climate justice plan for Ithaca to the 1000 conversations project. This piece of the Ithaca Green New Deal encourages community members to submit videos that explain what community and sustainability in Ithaca means to them.

“What if we were to reveal our sense of identity and what it means to be part of this community around that instead of around the differences?” Aguirre-Torres said. “I really think that’s a way of producing change.”

“Inclusion on the bargaining table has worked initially, but later we have received feedback that indicates the economically disadvantaged are ultimately displaced after the projects are completed,” Soyinka-Airewele said.

Aguirre-Torres said his work in Mexico may not translate directly to climate justice here in Ithaca, but still said building community here is essential.

“Everybody was helping to build [new houses] and they were learning,” Alguirre-Torres said. “There was a sense of belonging the community had to do with them accepting each other in the type of life and the type of socioeconomic status that they live in. So we needed to change the sense of identity, belonging and bring everybody together.”

Senior Steffani Farquharson asked Aguirre-Torres about his plans to involve the community in conversation about the Ithaca Green New Deal going forward.

“Will these be focus groups with unique communities or an open forum?” she said via chatbox. “What is the city hoping to get from the conversations?”

Aguirre-Torres said that the main way community members can give feedback is through the 1,000 conversations project. He said the purpose of hearing from as many people as possible within the community is to find an emerging complexity. He said this is when everyone has different ideas about what the key problem in a community is, but when those ideas are connected, there is something at the root of all of them that can be focused on in order to produce change.

Aguirre-Torres talked about ways to make Ithaca a sustainable community including energy efficiency, which means using less energy that will perform the same function; decarbonization, which means reducing carbon emissions through different means; renewable energy; and carbon capture and sequestration, which involve the process of storing carbon emissions that would otherwise be released into the atmosphere.

In addition to these direct action pieces of climate justice, Aguirre-Torres drove the important intersection of social justice and climate change in each facet of the conversation.

“We can remind people of what a sense of community could be,” he said. “I really think there are ways of turning things around here.”