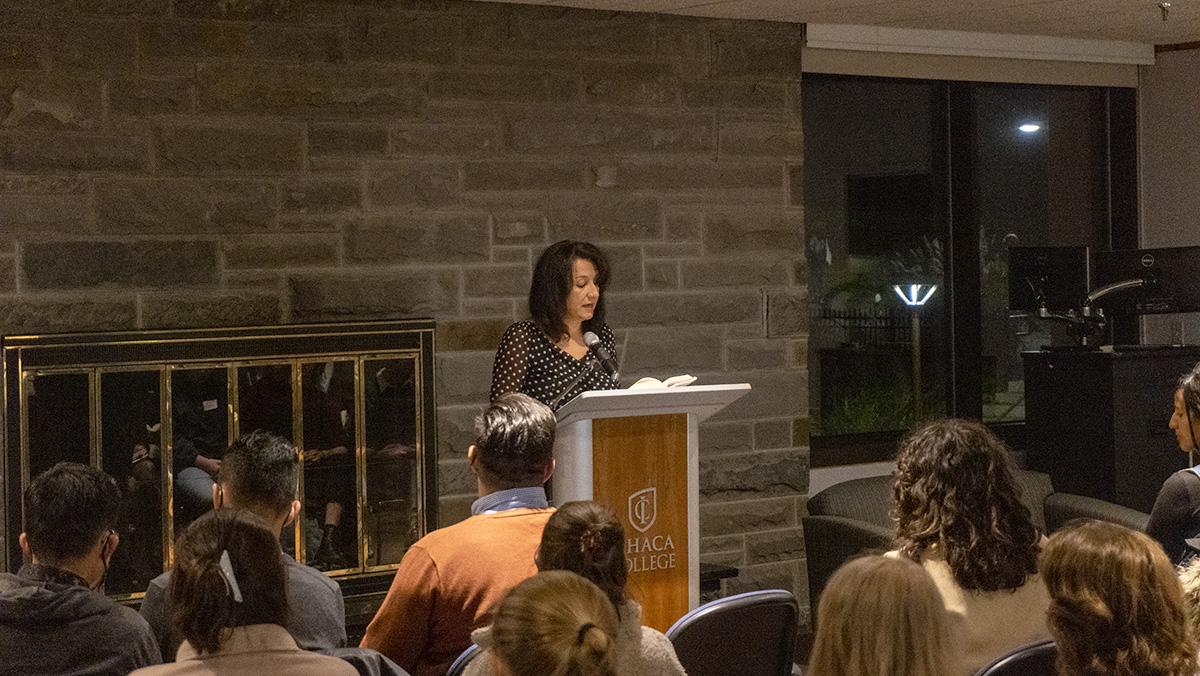 Ray Milburn/The Ithacan
Kristina Gorcheva-Newberry, author of her debut novel, “The Orchard,” was invited to the college as a distinguished fictional writer.
By Vivian Rose — Staff Writer
Published: October 5, 2022

“It was a frigid day on February 9, 1984,” began Kristina Gorcheva-Newberry at a reading and Q&A event Oct. 4 open to all Ithaca College students through the Student Leadership Institute.

Gorcheva-Newberry, author of her debut novel, “The Orchard,” was invited to the college as a distinguished fictional writer. The novel’s title was developed from Anton Chekhov’s 1904 play “The Cherry Orchard.” Based on Gorcheva-Newberry’s life, she described the book and the four main characters — Anya, Milka, Trifonov and Lopatin — as being based off her home city of Moscow.

Gorcheva-Newberry said the book is still relevant today because of the ongoing war in Ukraine, with Russian President Vladimir Putin forcing all men in Russia to become soldiers to assist the war efforts. Gorcheva-Newberry described a conversation she had with a close friend about sending young men to war.

“My friend said, ‘They made our children into refugees,’ and I said, ‘But they made others into killers,’” Gorcheva-Newberry said.

The first half hour of the event consisted of Gorcheva-Newberry reading excerpts from her novel while the second half was a Q&A led by sophomore August Van Der Werf.

Van Der Werf began by asking to what extent the book was written in an autobiographical sense.

“I think that all writing, all fiction, is autobiographical in some ways,” Gorcheva-Newberry said. “All those characters, they grow out of us. My characters, they’re all my children. So in many ways, writing a novel, it’s like giving birth.”

“No, at the time I wrote it, I did not see that happening,” Gorcheva-Newberry said. “However, I was inspired by an experience I had when I was a student in Moscow. I saw ‘The Cherry Orchard’ and I noticed how all the conversations were still the same [about Russian society]. I decided I would write a novel about four young people, in love with life, perhaps each other, and they are about to lose one other and their country. But they don’t know.”

Since Chekov’s play “The Cherry Orchard” was the impetus for Gorcheva-Newberry’s novel, Van Der Werf asked if the manuscript played a role in “The Orchard.”

“I reread the play many, many times,” Gorcheva-Newberry said. “I read Chekov’s letters and diary and saw different stagings of the play just to see if there were any other interpretations. I translated the passages [of the play] myself, because when I read the translation, I was baffled because people were adding their own words.”

Gorcheva-Newberry is one writer among several invited by the Distinguished Writers Series. Each writer teaches a writing workshop within a course associated with the series for a semester. The one-credit course includes an orientation with the distinguished writer, a 90-minute class, three evening readings and a 15-minute conference with the writer about individual students’ works.

Fifteen students are admitted into the workshop each semester, which is primarily open to writing majors and minors.

Rajpreet Heir, assistant professor in the Department of Writing and director of the Distinguished Writer Series, said that if a student’s submission is of high caliber, despite their major or minor, the student will be admitted.

“I send out a message to writing majors and minors in November or December, and I have students send in a writing sample, so you have to apply to get in,” Heir said. “The students write about the writers who visit and I have the students lead the event.”

Van Der Werf, a film major and writing minor, was one of these students who got accepted into the 2022–23 academic year’s workshop.

“I was really determined to make a good impression, and I did a bunch of research before the interview,” Van Der Werf said. “I think the best is yet to come because … when she breaks big, I can say I interviewed her, and spoke one-on-one with her about my work.”

The workshops are split into fiction and nonfiction writers, but for the readings like the Oct. 4 event, all admitted students of the workshop — whether they signed up for fiction or nonfiction — have to attend. Van Der Werf explained that sometimes there are poets that come as distinguished writers, but for this semester, that was not the case.

“It’s definitely a good contact to have and great experience,” Van Der Werf said. “I’m hoping this will be beneficial in the long term.”