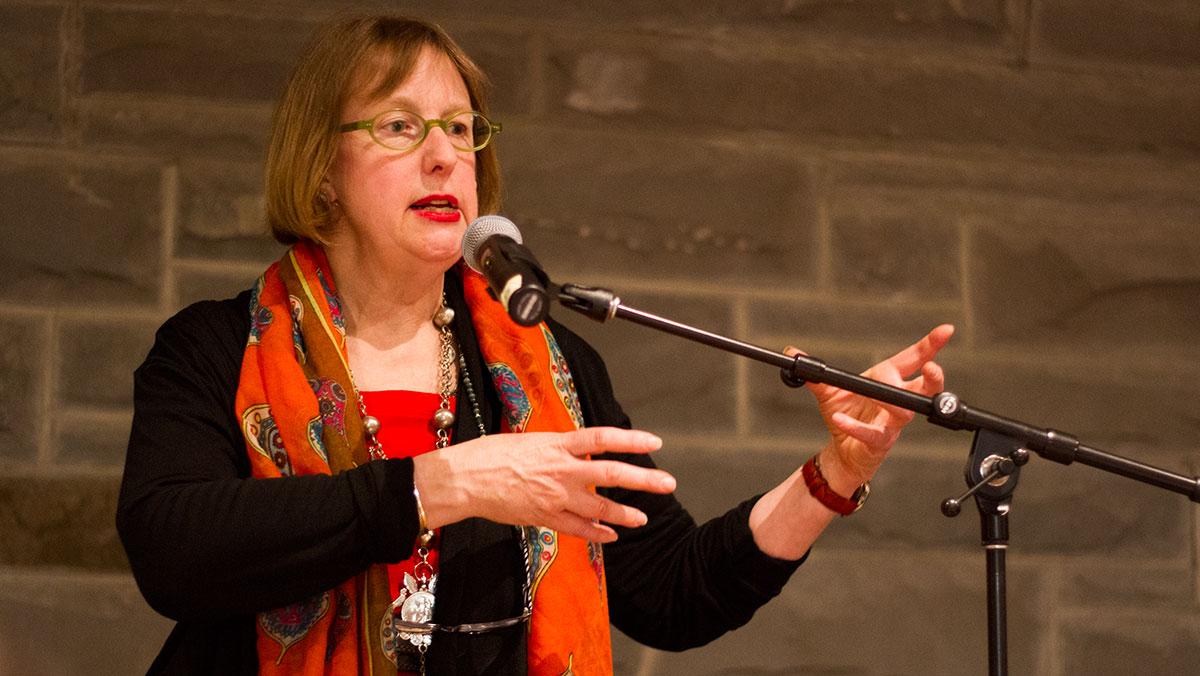 Kecia Romiel/ The Ithacan
As the winner of the 2002 National Book Award, Julia Glass said the achievement has become one of her biggest struggles as a writer.
By Maura Aleardi — Staff Writer
Published: April 8, 2015

The Distinguished Visiting Writers Series invites professional writers to give a public reading and conduct a workshop with 15 students. In addition, writers meet with five individual students for a one-on-one workshop.

Eleanor Henderson, director of the Distinguished Visiting Writers program, said the series is important to have at the college because it introduces writing to a variety of students.

“It exposes all kinds of our students, not just writing majors and minors, to great works of literature,” Henderson said. “There’s so much happening at Ithaca in terms of literary events, but this is, I think, one of the best offerings in Ithaca, not just as a series, but it also offers our students the chance to study with authors.”

Henderson said she chose Glass as a speaker because of her general reputation as well as the personal experience Henderson shared with Glass, in which Glass submitted a piece to an anthology Henderson edited. She also said choosing Glass, who published her first novel at age 46, expanded the students’ range of novels.

“I think it’s important for readers to be exposed to writers of another generation who they may not be really intimately familiar with,” Henderson said. “Introducing young writers to these esteemed writers who maybe their parents might be reading, I think, is important.”

Senior Tyler Chadwick said he was not only introduced to a new field of writers, but also to a new way of writing. Chadwick said Glass’ method of writing was interesting because she doesn’t plot her story before writing and is sometimes even surprised by where it goes. He said the way she reveals herself in her writing is another reason why she is so special.

“I just think she has a really unique voice as a writer, and the way she thinks about things,” Chadwick said. “There are people behind all writing, and I think that her voice makes that really interesting.”

Glass said her inspiration for writing doesn’t come from one particular place. In fact, she said she isn’t sure where it comes from at all. She said a common topic of hers, family relationships, is simply a topic she is interested in.

As the winner of the 2002 National Book Award, Glass said the achievement has become one of her biggest struggles as a writer. She said it allows her to take advantage of the success it has brought her, but she is sure to keep it under control and stay grounded.

“You can’t stop striving to be fresh and creative in different ways and you can take a lot for granted,” Glass said. “My first book won a huge award, and I will always be thankful for that and I feel incredibly fortunate. But it also means that I can be sort of lazy if I want to. I want to never be lazy. I don’t ever want to become complacent. I think that’s the biggest challenge: to not become complacent.”