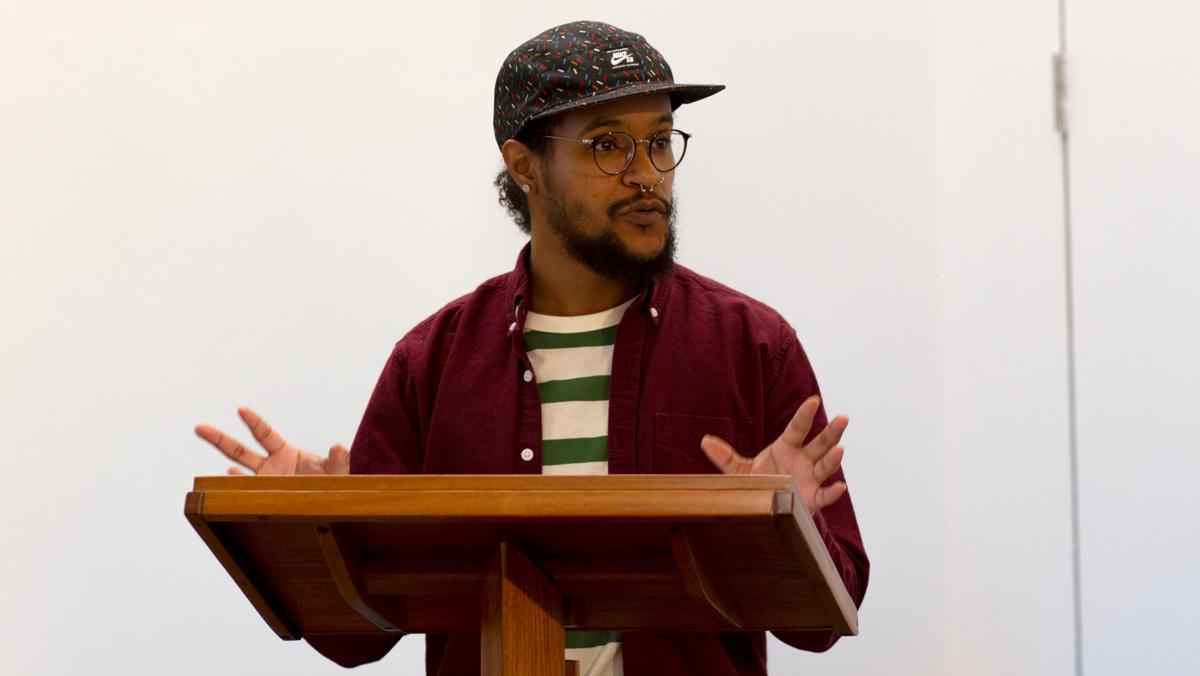 Five Ithaca College 2018–19 Diversity Pre-doctoral Scholars presented their research April 15 at the Diversity Scholars Research Showcase. The event was held in the Handwerker Gallery and approximately 30 students, faculty and staff from the college attended, including President Shirley M. Collado.

The Diversity Scholars Fellowship is a yearlong program for pre-doctoral scholars who are enrolled at accredited U.S. institutions and have approved dissertation proposals. During their year at Ithaca College, the scholars construct and teach their own curriculum for one class each semester and continue working on their dissertations.

Michael Richardson, interim dean of the School of Humanities and Sciences, said the college’s dissertation diversity fellowship program was started in 2010 to provide resources for scholars with diverse backgrounds and to enhance the learning environment of the college by creating a faculty with diverse perspectives. The program was originally specific to H&S but has since expanded to include all schools at the college. The 2018–19 scholars are Donny Bellamy, Alex Blue V, Vanessa Lynn, Carlos Roberto Ramírez and Zohreh Soltani.

“All of the scholars have added greatly to the discussions on campus, to the curriculum in the various departments of which they’ve been a part and to the student experience by working closely with students, even as they sought to finish their dissertations,” Richardson said.

The scholars were each given 20 minutes to present their research and they were each introduced by a member of their departments.

Bellamy is completing his doctorate in the women and gender studies program in the School of Social Transformation at Arizona State University. At the college, he taught Selected Topics: Women’s and Gender Studies during Spring 2019 and Strike a Pose: Trans Representation in Media in Fall 2018. At the showcase, he presented his research on the intersections of feminist theory, black transgender studies, queer of color critique and masculinity studies. The presentation focused on his most recent project, “‘Tumblr Saved My Life’: An Interdisciplinary Investigation of how Black Trans-Masculinity Operates through Tumblr.”

Bellamy said his experience teaching at the college has been inspiring for him and helpful in his research.

“I’ve been able to connect with queer students, which has been greatly validating for me to be a sort of pedagogue and to be able to talk about trans content,” he said.

Bellamy will be working as an assistant professor in the Department of Gender Studies at Skidmore College in Saratoga Springs, New York, in Fall 2019.

Blue V is a pre-doctoral fellow in ethnomusicology at the University of California at Santa Barbara in Santa Barbara, California. His research focuses on the intersections of sound, race, technology and space. At the college, he taught Popular Music in the Break during Spring 2019 and Introduction to Sound Studies in Fall 2018. He presented his dissertation on the uses of hip-hop by African-American communities in Detroit. Blue V has been named the next Thurgood Marshall fellow in the Department of African and African American Studies at Dartmouth College in Hanover, New Hampshire.

Blue V said he focused on Detroit in his research because of the city’s unique combination of race, sound and technology.

“Growing up black in some of these places, like Richmond, Virginia; Alice, Texas; and Denver, Colorado; made me start questioning how people were viewing me based on the way I speak, and I started wondering if sounds could be raced,” Blue V said. “Once I visited Detroit, I knew I could not do my research anywhere else.”

Lynn is a doctoral candidate in sociology at Stony Brook University. She has been researching the sociology of crime and criminal justice. She taught Selected Topics: Social Institutions & Organizations: Mass Incarceration in the U.S. in Spring 2019 and Sociology of Crime in Fall 2018 at the college. Her dissertation discusses the need for collective belonging in prisons, or when a group of people form a community and act collectively.

Lynn said her research about prison issues has complicated her original beliefs on prisons.

“This dissertation research has shown me the paradox of prisons,” Lynn said. “Prisons become a space where people actually learn about themselves, learn about society and get an education, but how come people have to go to prison to get an education? That’s not a pleasant finding in itself, and I’ve been struggling with this.”

Ramírez is a doctoral candidate in musicology studying in the Department of Music at Cornell University. At the college, he taught Senior Seminar in Music, Liberal Arts, and Outside Fields in Spring 2019, Music of Latin America during Fall 2018 and History of Literature in Music in both Fall 2018 as well as Spring 2019. His dissertation, “Digitizing Polyphony: Luis Venegas de Henestrosa’s ‘Libro de Cifra Nueva,’ Keyboards, and the mediation of sound in Early Modern Spain,” analyzes the intersections of music, structures and agency in 16th century Spain.

Ramírez said that while researching music in Spain, he learned about the oppression of women in music during the 16th century.

“Music making for women was seen as transgressive, and while their stories are written in between the lines of our current history, I think that knowing about them and highlighting them enriches our vision of what it is we are teaching our students,” Ramírez said.

Soltani is studying in the art history department at Binghamton University in Binghamton, New York. She studies the architecture of Iran, public space and power relations and socio-political transformation of space in post-conflict societies. At the college, she taught Selected Topics: Modern Architecture of Muslim Cities in Spring 2019 and Architectural History & Theory: The Modern Mosque in Fall 2018. Her dissertation, “Tehran: A symptomatic rendering of public architecture,” focuses on the effects of the 1979 Iranian Revolution and the Iran-Iraq war on the architecture of Tehran, Iran.

Jennifer Germann, associate professor and chair of the Department of Art History, introduced Soltani and commented on her “thoughtful and careful” teaching.

“What I think is crucial about her scholarship and her teaching is that she is both generating an archive of architectural history that challenges assumptions about modernism and also addresses gaps in the historical record,” Germann said.

Alexis Becker, associate professor in the Department of English, said she was at the event to support the pre-doctoral fellows. She said that she was also interested in learning about the research subjects of the scholars.

“It would have been great if there had been time for more conversation because they talk to one another really interestingly,” Becker said, “The presentations were fantastic, and they were really fascinating.”