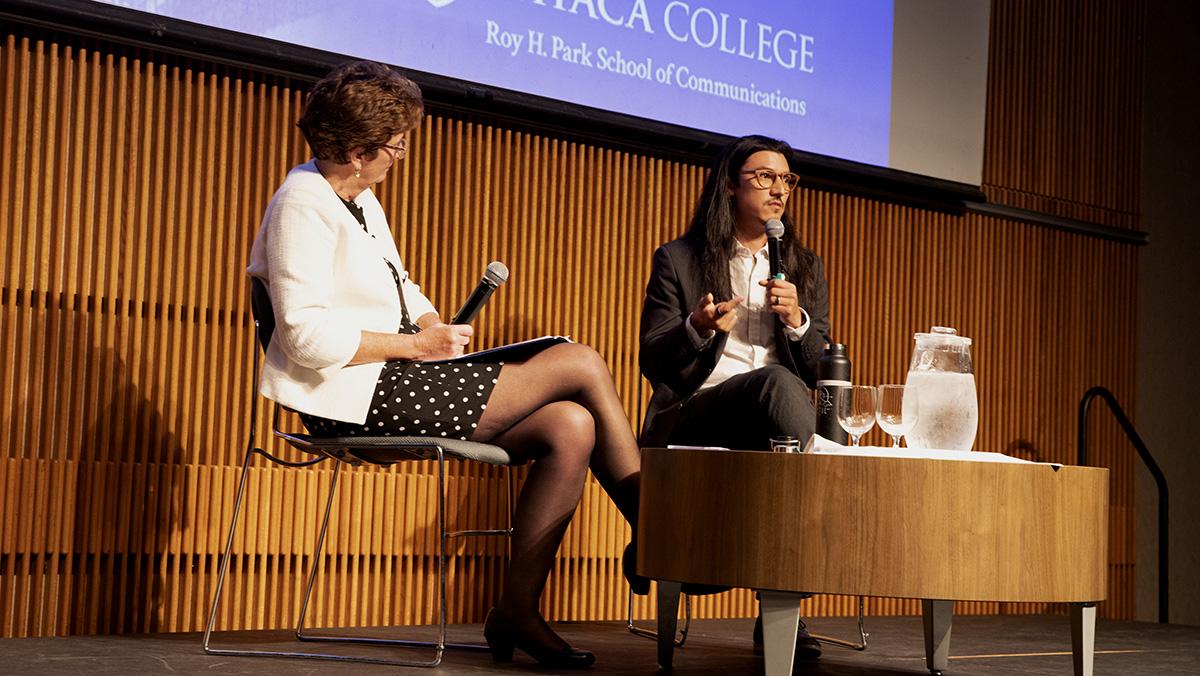 Tessa Dill/The Ithacan
On Sept. 22, Jeff Orlowski-Yang, creator of the award-winning documentary “The Social Dilemma,” spoke to students and staff of the college in Emerson Suites as the Roy H. Park School of Communications distinguished visitor of 2022.
By Vivian Rose — Contributing Writer
Published: September 25, 2022

Jeff Orlowski-Yang, creator of the award-winning documentary “The Social Dilemma,” was invited to speak to Ithaca College students and staff as the Roy H. Park School of Communications distinguished visitor of 2022.

On Sept. 22, the two-time Emmy award winning documentarian spoke to students and staff of the college in Emerson Suites. With a packed room of about 350 attendees, everyone listened as Amy Falkner, dean of the Park School, asked Orlowski-Yang to share his story about working in the media.

For someone to be invited as a Park distinguished, their message must be able to leave each student — across the 10 majors of the Park school — with a valuable lesson. Falkner said that because Orlowski-Yang has naturally become versed in a wide variety of skills as a documentarian, he was a perfect match for Park students.

“The work that he does combines being an investigative reporter, a documentarian and photographer,” Falkner said. “For our school, he was a great person to invite as a Park distinguished guest.”

The evening’s event began with Jack Powers, professor in the department of Media Arts, Sciences and Studies, thanking the Park school’s supporters, along with April Johanns, coordinator of Student and External Relations in the Office of Communications, who coordinated the visit from Orlowksi-Yang.

Falkner began to ask questions leading to discussion about Orlowski-Yang’s time working on “The Social Dilemma,” a movie about the inner workings of Big Tech and their heavy usage of manipulation and influence. Orlowski-Yang said some of the most tedious work was making the movie appeal to a broad audience, including dramatizations that would make the movie more watchable.

“The earliest cuts of the film were two plus hours of non-stop talking heads,” Orlowski-Yang said. “I couldn’t watch it and it was hard for our team to sit and watch this movie. … We asked ourselves, ‘Is the average person going to watch this and how do we make it more accessible and more interesting?’”

Orlowski-Yang shared his thoughts on the beauty of being a content creator, but also what students should keep in mind when deciding what project to pick up next.

“What I love about nonfiction filmmaking is that you get to be a student in whatever you want to study,” Orlowski-Yang said. “However, if I can’t stay interested in it for three years, then it shouldn’t be on the list. You need passion to sustain the project.”

Students were given the opportunity and were encouraged to ask their own personal questions to the Park distinguished guest.

Two students, first-year student August Culhane, a writing for film, TV and emerging media major, and sophomore Liberty Lee, a journalism major, asked questions that stood out and received plentiful answers from Orlowski-Yang about what to expect from the media industry.

Culhane asked Orlowski-Yang for advice for people who are ready to jump into the industry with their own ideas rather than doing exactly what other people tell them to do. Orlowski-Yang said a healthy balance between projects that pay the bills and those that are fulfilling is key.

“Find any work you can do that can help you pay the bills, that is advancing your knowledge and your skill sets and what you want to build toward,” Orlowksi-Yang said. “While pursuing that, find the time and energy for your own passion projects. Don’t do it alone, build a team, surround yourself with people who have more experience and more knowledge than you do, and who inspire you.”

Lee asked how students in communications could go about developing careers outside of the social media sphere, so that it doesn’t become another dangerous piece of what much of media has become in the modern era. Orlowski-Yang said printed material — especially journalistic digital writing — is essentially controlled by Big Tech.

“The entire field of journalism has basically been hacked by social media at this point, and this entire field is operating under the guidelines and parameters of social media in general,” Orlowski-Yang said. “In certain aspects of this industry, you can have a successful career without needing to be on social media.”

First-year student Cormac Abbey, a television and digital media major, said he was happy to have Orlowski-Yang be invited by the Park school.

“I quite like it,” said Abbey. “I think it’s quite useful to attend. He’s a very gifted speaker. I’m glad it’s required for S’Park students.”

S’Park is a class all first-year Park students are required to take in order to network with Park alumni and others in the communications industry.

When Orlowski-Yang was asked what Ithaca College Park students can do in the future to help with such crises as the social media and climate crises, he said that this is a unique time in history when the world needs real news and more investigative reporting in areas of society that are currently lacking.

“In some ways, this is a time of huge opportunity because there’s so much we need to cover,” Orlowski-Yang said. “There are so many stories that we need to elevate and shine light on and the need has never been greater. … I encourage people to put their time and energy into important work that people care about. … The world needs it.”