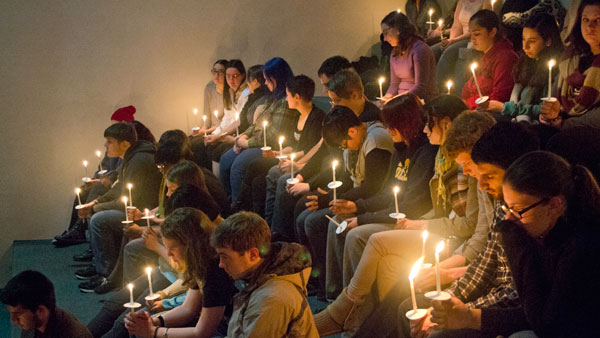 Three months after the death of junior Michael Clark, the Ithaca College Department of English is hosting the first annual Michael Clark Renaissance Essay Contest in his honor.

Clark was killed in a car accident Dec. 1, 2013, when he swerved his vehicle to avoid hitting a deer. Three other passengers in the car, sophomore Christopher Rose and juniors Ezra Chamberlain and Melanie Pond, were injured in the accident.The crash occurred while the students were returning to the college after Thanksgiving break.

The essay contest, a tribute to Clark, will award one undergraduate with a $200 cash prize for an outstanding essay on Renaissance Literature. The deadline for submissions is April 1.

Dan Breen, chair of the Department of English and associate professor, said the English department will announce the winner and present the award at the English Honor Society’s end-of-the year reception, the date of which has yet to be determined.

The contest is not just for students with English majors or minors, Breen said. Interested students are required to submit two paper copies of an essay written within the last three semesters that provides a thoughtful and analytical argument in regards to Renaissance Literature, in honor of Clark’s passion for the subject.

“They can donate through the Ithaca College Annual Fund, and they designate their gift for English,” Breen said. “And then it’ll go into the account called ‘gift-money,’ and that’s where the prize money comes from.”

Michael Twomey, Dana professor of English, said Clark was a bright student who was knowledgeable about his studies and had planned to do an honors thesis with Professor Chris Matusiak this semester.

“He loved literature; he even memorized passages for Shakespeare, and he memorized poems that he liked,” he said. “But he was interested in lots of things, so he read a lot about all kinds of things so that whenever he had something to say in class, he had this very rich context and rich remarks.”

An English major, Clark never intimidated others and always built a community around him wherever he went, Twomey said.

“He was the kind of person that everybody gravitated towards, both students and professors,” he said.

Twomey said Clark was a thoughtful and serious student who had a sense of humor.

“He was just immensely likable,” Twomey said. “When he talked with you, he was completely engaged in whatever you were talking about.”

Kassie Moore, president of the junior class council and one of Clark’s former classmates, said Clark was a good student who had a passion for writing.

“When he shared whatever we were working on, you could tell that he was passionate about what he was writing about,” she said.

Whether in social or academic contexts, Clark would always refer to Renaissance texts in whatever he talked about, Chris Holmes, assistant professor of English, said.

“The essay prize is really meant to focus upon and highlight that aspect of his intellectual interest, and so we will, each year, look to get submissions of the best Renaissance essays that the undergraduates prepare either for class or outside of class,” he said.

Holmes said Clark was a hard-working student who was always prepared for class and contributed ideas of philosophical and literary thinking, unusual at the undergraduate level.

“Michael struck me from the moment that I had him in class as a sophomore as deeply intellectual, extremely diligent and just thoughtful in all possible ways,” Holmes said. “He was never unprepared for class, and he was able to think about very large philosophical and literary ideas in a way that a young undergraduate mind isn’t usually able to.”

Moore said she sees the contest as a way to keep his memory alive within the college.