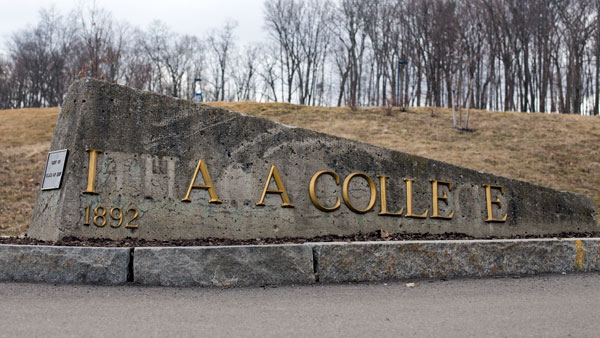 Recent acts of vandalism have affected welcome signs that will be visible as prospective students and other guests come to campus for events like Ithaca Today and An Inside Look on April 12–13.

The stone monument displaying “Ithaca College,” located on Lyceum Drive at the back entrance of the college near the Garden Apartments, has been vandalized repeated times this academic year. The first incident occurred Sept. 13 when a caller reported one brass letter had been stolen. Investigator Thomas Dunn of the Office of Public Safety and Emergency Management said three additional letters were reported stolen April 3.

“This is an open investigation, and we are attempting to identify the person or persons responsible,” Dunn said.

Eric Maguire, vice president of enrollment and communications, said he was unaware that the sign had been vandalized and did not know of any current plans for its repair.

Rachel Reuben, associate vice president for marketing communications, said she didn’t believe the sign would pose an issue to the image of the college.

“I’m not terribly concerned,” she said. “The traffic from Ithaca Today and Seth Meyers will be through the main entrance. It would only be people who are very familiar with our campus and know there is a back entrance that would encounter the sign before it is repaired.”

Reuben was part of a committee to install wayfinding signage across campus, a project that reached its completion this month. She said if something were to happen to the wayfinding signs, such as vandalism, the procedure for reporting and resolving the incident would be fairly similar to what is being done about the welcome sign.

“Someone would report it to Public Safety, Public Safety would do an investigation and then we would discuss how to repair or replace the signs,” she said. “We have a small signage committee that was in place for the duration of the program. We would meet again to discuss budgeting and strategies to resolve the issue.”

Sophomore Dominick Recckio, vice president of communications for the Student Government Association, said though vandalism isn’t under the SGA’s jurisdiction, the group has discussed it before.

“I believe that [the vandalism] does affect the campus negatively,” Recckio said. “If I were an incoming student and I saw something like that, I would wonder what the student population was like.”

Though the SGA currently takes a passive role when it comes to vandalism, senior Courtney Brown said it used to have a beautification committee that made improvements to the visual appeal of the campus, like outdoor seating, murals and increasing the number of disposal receptacles. Brown said she was involved with the SGA when the committee was in place two years ago and said it failed to reappear after the senators in charge graduated.

Though the committee is gone, Recckio said, there are certain circumstances in which the SGA would get involved with cases of vandalism.

“Through SGA, we try to make the most inclusive campus here that we can,” he said. “When things like vandalism start encroaching on inclusivity, then I can definitely see that becoming something we could look into.”

Brown said she sees other ways in which the SGA may be able to get involved in situations like this sign vandalization scenario.

“I think if it was brought to a senator’s attention, they would be more than willing to work on getting [the letters] replaced,” she said. “I guess the only issue is if they were being stolen, then the replacements would eventually go missing, too, and then that would not be an issue of beautification but of the campus culture of taking care of the college property.”