With the end of the semester approaching, students will have to conclude finals week well into the winter holiday season — creating an inconvenience for students and professors. 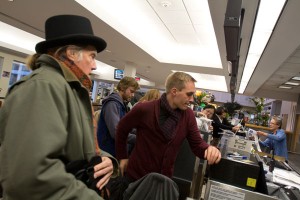 From left, Ithaca resident John Humphries sees off his son Sky Humphries on Wednesday at the Ithaca Tompkins Regional Airport. Late exams could cause students to travel close to the holidays. Shawn Steiner/The Ithacan

Last fall, the academic calendar ended Dec.17. The former calendar committee set 10 p.m. Dec. 23 as the official closing time for this semester. The time conflicts with international holidays, which adds time pressure to students trying to get home for celebrations and financial strain as holiday-time flight tickets soar.

Brian Scholten, Ithaca College registrar and the chair of the current academic calendar committee, said this semester’s calendar was drafted before his arrival in 2009.

Scholten, who said he can only guess the reason behind this move, said this was probably done to avoid any conflict with Cornell University’s calendar.

Freshman Emily Draper, who is from Alaska, said the college needs to be more sensitive to the needs of students from all around the country.

“I would say that they need to be more aware that nor everyone is from the Tri-state area,” said Draper. “If they are proud of the fact that they represent 48 states, then they should accommodate the people from those other states.”

Scholten said one of the committees’ concerns was that Ithaca does not have sufficient airline flights and hotels to accommodate parents and students from both institutions arriving at the same time.

“We’ve been working with Cornell University on calendar committee recommendations and proposals for three more years until the 2016-17 calendar to make sure we avoid conflicts,” he said.

Scholten said the proposals for academic calendars that were sent to the provost for the years 2014-15, 2015-16 and 2016-17 take exams and travel into heavier consideration.

“There are a lot of considerations this time around, mainly because of the IC 20/20 strategic vision, that the committee had to consider,” he said. “But one of the other things we tried to keep in mind as we discuss the calendars for those years was to try to be mindful of when exams ended in the fall, so there wouldn’t be as much difficulty for folks trying to finish their exams and travel for the holidays.”

The original calendar was revised in October to give students an extra day, moving the closing day from Dec. 23 to Dec. 22. He said the administration realizes this calendar poses difficulties for all students, especially international students, who have to fly out of the country.

“It’s a difficult situation for everybody, and certainly the administration understands and recognizes that traveling at this time of the year, regardless of where you are going, is difficult for everyone and probably more so, for some reasons, for international students trying to get home to another country.”

“The difference has been that since this semester is essentially a week longer, everything is happening a week longer,” Dimitrova said. “Normally in the first week of December, we start to receive a lot of requests for travel signatures, and we encourage that. Which is probably going to start next week because we’re staggered by a week.”

Freshman Tung Tran, who will be traveling to Vietnam on Dec. 24, will miss Christmas with his family this year and will have to spend a night in New York City because that was the best flight he said he could find.

“In my case, I have to pay $149 for just one night for a hotel in New York City,” Tran said. “So it’s not only inconvenient, it’s also very expensive.”

Meanwhile, with final semester grades due Dec. 28, professors will be hard at work through the holidays.

Darius Conger, assistant professor of economics, said the calendar was not planned well.

“I am not quite sure why nobody was more sensitive to this holiday issue and the travel requirements that accompany it — not everybody lives in Rochester,” he said. “It’s just inconvenient and a bit annoying to have to be grading over the holidays.”