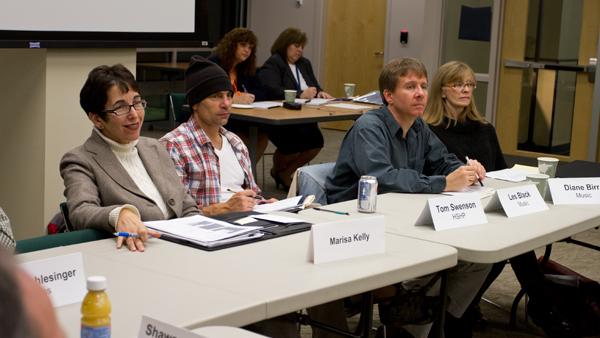 At the meeting, Marisa Kelly, provost and vice president for educational affairs, reiterated her stance on the Faculty Council’s request for a 3-percent increment in general merit pay. Kelly said the percentage is significantly higher than what the IEBC was comfortable in putting forward. At the Nov. 13 meeting, she said she did not support advocating for a larger salary pool.

Don Lifton, professor of business, urged Kelly to advocate for the faculty’s request for an increase in salary. Lifton said faculty input in resource allocation — and in this case Faculty Council input in budget decisions — is part one of the Characteristics of Excellence in Higher Education, according to Middle States.

“There is still time, provost, to rescue the situation,” Lifton said.

Twice, the council went into a private executive session. The first was for a meeting with Kelly and Michael Trotti, associate professor of history. Trotti brought in fliers addressed to Kelly and President Tom Rochon from a group of faculty, asking for the administration to call off the search for a new director of the academic advising center potentially until next semester because of budget constraints.

On Wednesday, President Tom Rochon has called for an all-faculty meeting “to bring greater transparency and clarity to the directions the college is taking and to provide an opportunity to hear faculty concerns.”

This decision follows an unfavorable faculty response to Rochon’s first installment of a weekly series on his blog, the President’s Notebook, on Nov. 27 to update the campus community on challenges and developments facing the college.

The second installment was published Monday. Marisa Kelly, provost and vice president for educational affairs, also began a series via email called “IC 20/20 Question of the Week” to the campus community last week.

The two series came after a string of all-faculty town hall meetings, where faculty expressed specific concerns about shared governance, and a private meeting between Rochon, Kelly and the Faculty Council Executive Committee, where the faculty’s concerns were relayed to the administration.

“We’ve communicated the need that there has to be more open communication and explanations of things,” Rothbart said.

However, for some faculty, the informative blog posts from Rochon and emails from Kelly are insufficient.

“You see, the thing is you cannot cover bad policies through PR,” Asma Barlas, professor and program director for the Center for the Study of Culture, Race and Ethnicity, said.

Barlas, as well as 100 other faculty members, have electronically signed the comment in response to Rochon’s first installment, requesting “a full and open accounting of how funds are being allocated at Ithaca College.”

The 101 faculty members said they are concerned about program review with the threat of cuts, the office space issues and the relocation of the philosophy and religion department. At the same time, they wrote, the college is investing in things not considered a priority by the majority of faculty members, such as “funds in the China Center, the New York City Center, the new administrative team for advising, new software for e-portfolios and the costs of the [Huron] consulting team.”

Rothbart said Faculty Council is not directly linked to the comment on the president’s blog. However, six of the 33 Faculty Council members have signed the comment. The council is currently developing a separate action plan and sending out a survey to gauge faculty concerns.

“Certainly, we are aware of all of the issues there, and we are actively trying to deal with them,” Rothbart said.

Steven Skopik, professor of cinema, photography, and media arts, said faculty are taking advantage of every opportunity to open up a dialogue.

“There are a lot of different venues,” Skopik said. “One of them is Faculty Council. The president’s blog is [also] a public forum for discussion. So for a lot of people that seemed like a logical place to have additional conversations.”

In the meantime, some faculty have been airing concerns through email chains to each other, Barlas said.

“Faculty are continuing to write very, very long emails to each other about all the problems that have happened during the last three years,” Barlas said. “It seems that for a long time people sort of went along, went along, and by now everything is sort of ready to spill over.”

Along these lines, Rothbart said, faculty participation is a “healthy, painful — but a healthy sign,”