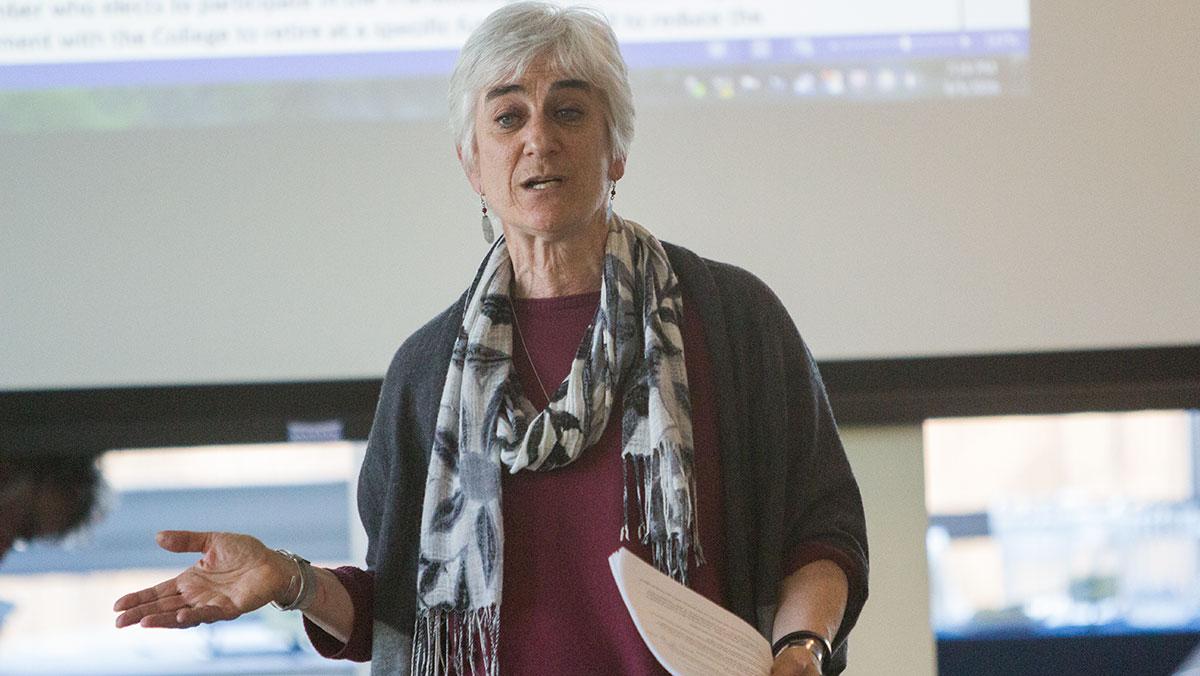 Caitie Ihrig/The Ithacan
Carla Golden, professor in the Department of Psychology, spoke to the Ithaca College Faculty Council at its April 5 meeting about concerns she had with the phased retirement. At the meeting, the council addressed confusion around whether or not faculty members lose the rights of tenure when they begin the process of phased retirement.
By Grace Elletson — Staff Writer
Published: April 7, 2016

The Ithaca College Faculty Council has addressed confusion around whether or not faculty members lose the rights of tenure when they begin the process of phased retirement. The council has also created a committee to formulate the new criteria for the Dana Professorship award and announced the nominees for the next faculty representative on the Ithaca College Board of Trustees.

Carla Golden, a professor in the Department of Psychology, spoke to the council at its April 5 meeting about concerns she had with the phased retirement contract after trying to apply for it herself. She said she has read in the phased retirement rules that the contract forces faculty members to give up their tenure status and any tenure rights, like being able to serve on certain committees.

But other documents, like the phased retirement contract itself that Golden was given to sign, stated that she would be able to keep her tenure rights.

She asked the Faculty Council for help with clarifying what rights tenured faculty in phased retirement actually have. Until then, she is postponing on signing the phased retirement contract until the language is clarified.

Benjamin Rifkin, provost and vice president for educational affairs, also attended the meeting and said he supports revisions to the phased retirement plan and allowing phased retirement faculty to continue to serve on certain committees.

“If someone is in phased retirement and can’t participate in civil services — that isn’t right,” Rifkin said.

John Rosenthal, professor in the Department of Mathematics, said he has run into problems when his department chair said he could no longer participate in certain facets of his department because he is in phased retirement and has given up tenure. He said he contacted both his chair and dean and referred to the paragraph that states he has tenure rights, and the issue was resolved.

The council decided to further address the issues Golden brought up at later meetings to decide how language should be clarified.

The council also decided to form a committee to create criteria for professors wanting to apply for the Dana Professorship, an award for professors who have achieved academic and research excellence.

The Dana Professorship was previously given to professors for life, but after the college renegotiated the program with the Dana Foundation, the administration and the foundation decided to give the title to professors for five years at a time.