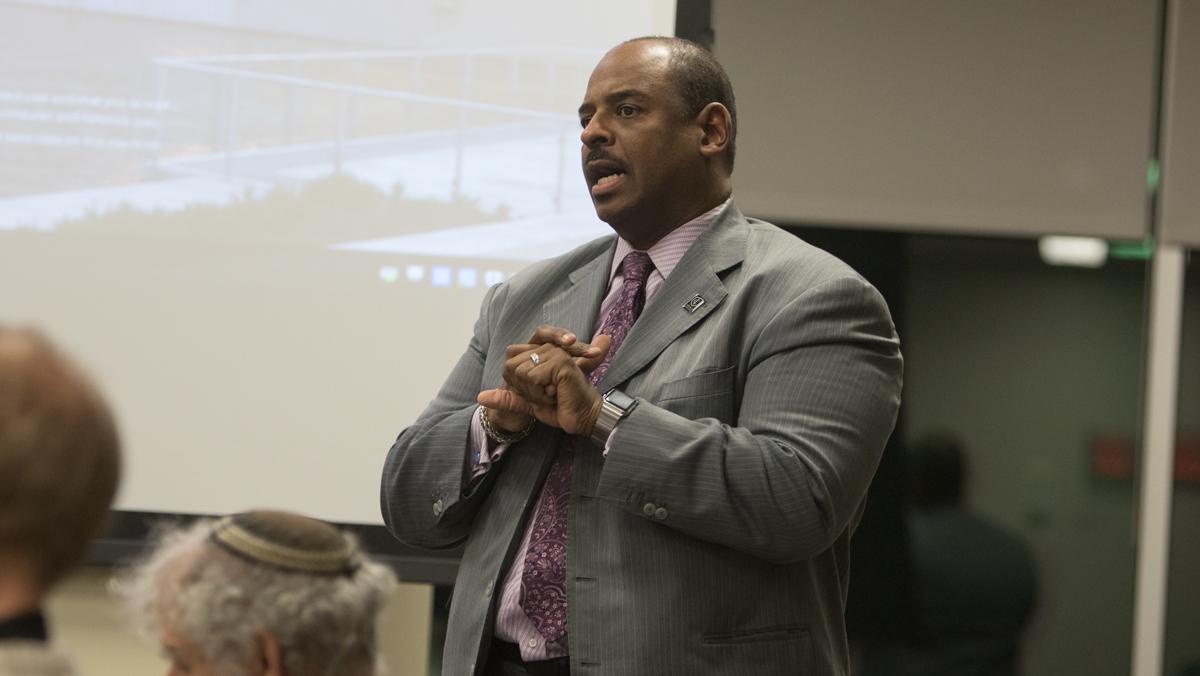 The council also discussed the questions involved in the Faculty Load Service Survey, designed to determine faculty’s time commitments outside of class, and how to make survey questions more inclusive for women and for people of color. Registrar Vikki Levine presented at the meeting and said she has received faculty requests for more 75-minute classes in the schedule. She also said faculty members have access to all student transcripts through DegreeWorks, the new degree evaluation software implemented in October. Council members discussed their concerns about student privacy and the benefits that come with professors’ having access to academic transcripts.

Dickens said the paid family leave policy drafted for all faculty members will be completed and implemented after Jan. 1, when the New York State Paid Family Leave (PFL) law will go into effect for staff members. He said the college’s policy will be paid for with institutional funds as opposed to deductions from employee salaries, which is what the state law dictates, as previously reported by The Ithacan.

“We are in the budgeting process, earmarking dollars to support this, and it will be funded through the institutional funds,” Dickens said.

He also said the college’s paid family leave policy will offer both more weeks of leave and higher paid leave than the state law offers.

“We are exceeding that because we think that there are a number of provisions that we think can be richer,” Dickens said.

The policy for staff is different than the policy for faculty, he said. This is because staff members are required under state law to be incorporated into PFL, whereas faculty are not. He said there will be attempts to create parity between them. He said staff members also have paid time-off leave.

Dickens said he will be presenting draft language of the new policy during a meeting with the Faculty Staff Benefits Committee, a committee that advises the administration on issues of benefits, on Dec. 7.

Rachel Fomalhaut, lecturer in the Department of Writing, asked Dickens what plans he had for getting faculty feedback about the policy.

Dickens said that due to the short timeline and turnaround for the policy, other forms of feedback might be difficult, but he said he is still open to the idea. He said the meeting is a feedback mechanism.

“That’s really the mechanism we are using at this point,” Dickens said. “Given the short timeline, there’s not a great deal of window for back–and–forth feedback and response. So we want to try to make this as inclusive as possible.”

The council also discussed the possible questions that will be a part of the Faculty Load Service Survey. The survey aims to determine what kinds of service faculty are involved in outside of teaching, the time spent doing it, what impedes service and what kinds of service faculty members want to be involved in, Tom Swensen, professor and chair of the Department of Exercise and Sport Sciences and chair of the Faculty Council, said.

Paula Ioanide, council member and associate professor at the Center for the Study of Race, Culture and Ethnicity, said the survey must also have questions that give opportunities for faculty members of color to share when they unofficially counsel students of color during their office hours and other times during the school week. This topic has been previously reported on by The Ithacan. She said this commitment is often invisible and is a result of shifts in the political climate on campus and nationwide.

Levine also presented about two schedule-related topics. Levine said that with DegreeWorks, the new degree evaluation software, faculty members have access to the academic transcripts of all students at the college. She said there is a risk that if a faculty member viewed a student’s transcript for non-educational purposes, it could be a potential Family Educational Rights and Privacy Act violation. FERPA is a federal privacy law that gives parents certain protections with regard to their children’s education records. If a student questions the intentions of a faculty member who viewed their records and could prove the intentions were not legitimately educational, there is a risk of violating FERPA. She said that at other schools she has worked at, faculty did not have access to all student transcripts.

The council weighed the benefits of allowing faculty members to have access to students’ transcripts, but other members said they had concerns about students’ privacy and presented ideas about changing the software to allow students to dictate who had access to their transcripts.

Faculty members said they usually accessed students’ transcripts during advising sessions, while writing letters of recommendation, while managing override requests and if concerned about a student struggling in one of their classes.

Fomalhaut said she thinks there is a difference in gravity of having students’ previous class schedules to help with scheduling questions and having access to their grades.

Devan Rosen, associate professor and emerging media program director in the Department of Media Arts, Sciences and Studies, said he is not comfortable with faculty having access to all students’ grades. He said he was not aware that faculty could access the graded transcripts of any student at the college and said he does not understand the rationale for faculty to be able to access the transcripts of students they have no contact with.

“I see far more opportunity for abuse than I see for benefit,” Rosen said.

He also said he wondered whether students would be okay with faculty access to transcripts.

Ari Kissiloff, assistant professor in the Department of Strategic Communication, said he thinks access to students’ transcripts is a part of the trust-based close relationships that exist between faculty and students at the Roy H. Park School of Communications.

“I think we are kind of used to being self-serve here, to being trusted,” Kissiloff said.

Levine said it would be difficult with current software to allow students to entirely dictate who has access to their transcripts, but that access can be restricted to certain groups, such as by school or department.

She said faculty have asked for an increased amount of 75-minute classes. Levine presented three different schedule matrixes at the meeting, and the council discussed potential changes to the schedule and how there were a large variety of needs by school and department. Levine said she thinks that a task force composed of faculty members should be formed to tackle the issue.