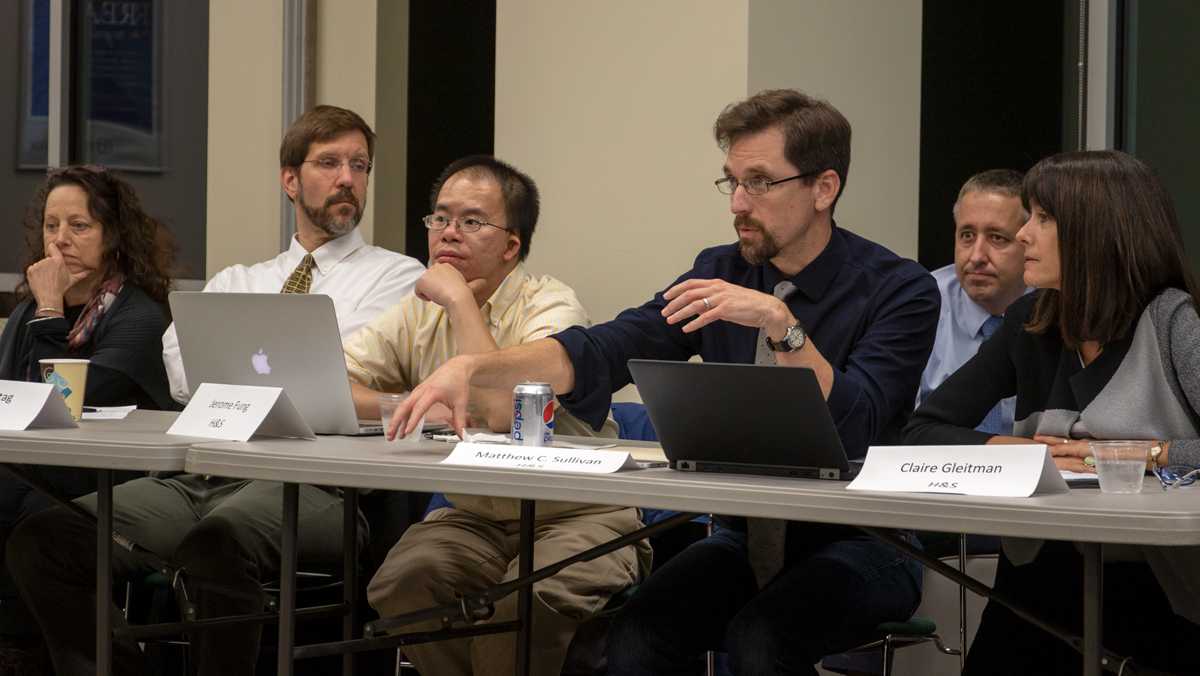 The Ithaca College Faculty Council discussed how to amend a discrepancy in the college’s Title IX policy at its meeting Oct. 2.

Title IX coordinator Linda Koenig explained to the council that there are currently two conflicting sections of policy that create a gray area when it comes to student-faculty relationships. The council also considered approving a new dean of faculty position and reviewed a policy about how professors use Sakai.

According to section 2.1 of the college’s policy manual, titled “Sexual Misconduct, Domestic/Dating Violence and Stalking,” any sort of romantic or sexual relationship between students and faculty are explicitly prohibited, whereas section 2.6, titled “Policy on Sexual Harassment,” only prohibits relationships between a faculty member and someone they have a supervisory, instructional or evaluative relationship with. Koenig asked for the council’s feedback on how to make these policies more consistent and in line with the college’s other conflict–of–interest policies.

“If I am a faculty member who wants to have an on-campus relationship, I can refer to whichever suits me,” Cornish said. “It is incongruent. We should really think about what these sections are saying.”

These concerns were echoed by Koenig and members of the council who said there are inherently unequal power dynamics between students and faculty.

“The college follows the example of affirmative consent,” Koenig said. “It is difficult to prove affirmative consent when there is a power disparity. If there is a pre-existing relationship, that is something we should take into consideration, but if we hire you, there is an understanding that you have a position of power on campus.”

Council members also voiced their concerns that an outright ban on student-faculty and student-staff relationships, as section 2.1 suggests, would not only be too broad and impractical to enforce but would not take into account the complexity of student and faculty roles on campus. The council discussed how individuals like graduate students working as teaching assistants or recently graduated individuals hired for nonsupervisory positions were not considered under these policies.

“Maybe there is an older student in their forties who is going back to college, and they meet a staff member who has no role in determining their life as a student, say, someone that works in the budget office,” said Rebecca Lesses, coordinator and associate professor in the Department of Jewish Studies. “I see no reason why something like that should be prohibited.”

Any revisions must still reflect the overarching guidelines for Title IX provided by New York state labor laws. During the meeting, Guilherme Costa, vice president and general counsel, provided an overview of two updates to these laws. The first was Article 7, section 201 G, which requires institutions to adopt a state-approved sexual harassment policy and host interactive training for all employees, including student employees, at least once a year.

The second, Article 15, section 269.1, increases employer liability when responding to instances of sexual harassment. Costa said he is currently reviewing the college’s policies and is working with the Office of Human Resources to make sure that it meets requirements.

“Everyone that is in our community is affected by one or both of these statutes,” Costa said.

The council also discussed the possibility of creating a dean of faculty position. Proposed by the Faculty Council Executive Committee, the dean of faculty would serve as an advocate and resource for all faculty members, Chris McNamara, clinical associate professor and clinic director in the Department of Physical Therapy, said.

McNamara said the reasoning for this position came from conversations held during the 2018 spring semester among the Faculty Council, deans and acting provost regarding a proposed faculty handbook revision that would require face-to-face meetings at all levels during the tenure and promotion process. She said a dean of faculty would more effectively deal with interfaculty disputes, specifically those regarding bias and discrimination in the tenure and promotion process.

Tom Swensen, Faculty Council chair and professor and chair of the Department of Exercise and Sports Sciences, said that creating the new position could serve as a possible compromise with the administration regarding the tenure meetings at all levels provision. He said both the provost and president have seemed receptive during informal meetings with the Faculty Council executive committee on the topic.

Cornish said she supports the measure because it would allow for greater attention to be paid to faculty issues and an opportunity for professional development for any faculty member that assumes the position.

The proposal received mixed reactions from the council. Some members of the council, like Jason Harrington, associate professor in the Department of Media Arts, Sciences and Studies, were unsure how exactly a dean of faculty position would fix previously discussed issues with the tenure process. Harrington said he understands how an ombudsman-esque person would be useful as a resource for faculty, but he said he does not see how the position would fix some of the more procedural aspects that can be taken advantage of during the tenure and promotion process.

Peyi Soyinka-Airewele, professor and chair of the Department of Politics, said she has experienced discrimination at the college firsthand and said she knows of other professors whose experiences with bias have started during their first or second years of teaching. Such a position, she said, would create a place for these individuals to go.

“You have class visits that are problematic — faculty not turning up, five faculty turning up on the same day and creating a hostile environment, photos being removed from a professor’s lineup,”  Soyinka-Airewele said. “It happens every year, every time.”

The council rejected the motion to include meetings at all levels in the tenure and promotion process and tabled the idea of a dean of faculty position until it can review a more in-depth description of what its powers and responsibilities would be. Cornish said she would be willing to provide the council with a more detailed outline for its next meeting.

The council also reviewed how faculty use Sakai and discussed how that interacts with the Family Educational Rights and Privacy Act. Mark Fink, director of teaching and learning with technology, and instructional technology coordinator Marilyn Dispensa asked for feedback from the council on whether or not the college should continue to give professors free reign over their courses’ Sakai pages.

The council came to the conclusion that the pages were valuable resources for both students and professors, and as long as the student information provided on those pages falls in line with the college’s document retention policy, there is no need to mandate the unpublishing of pages.