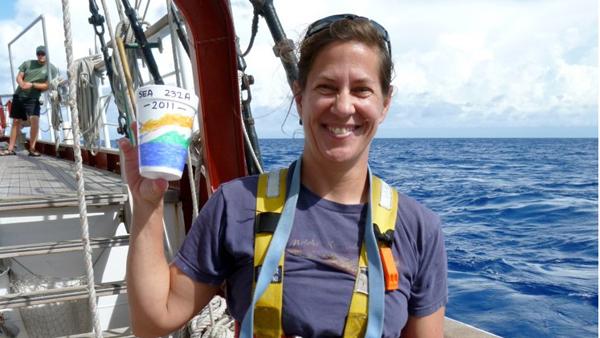 Courtesy of Susan Swensen
Susan Swensen, biology professor, stands on a ship bound for the island of Raieta, located in Polynesia, as part of a Sea Education Association trip.
By Evin Billington — Staff Writer
Published: April 25, 2013

Next semester, students in the new class, Biology of Oceanic Islands, will spend 10 days in January sailing around the Caribbean Islands, collecting samples of the ocean water and ecosystem while working as a functioning boat crew.

Swensen said she became interested in creating the class after attending a Sea Education Association sailing trip for college professors.

“It occurred to me that that would be a really great marriage of two ideas, if you could teach a course about evolution on islands and actually take students on a vessel like that and see the islands, and stop off and actually experience and look at some of the things they were learning about in the classroom, that would be just a fantastic combination of things, so that’s what I’m trying to do,” Swensen said.

She said the study of evolution on islands is especially interesting, because evolution happens faster than in other areas.

“On islands, you have microcosms of evolution in fast motion, and it’s easier to see what’s going on on an island, because it happens faster, and there’s fewer species to look at,” Swensen said.

The class itself, which takes place in the fall, will teach students how to collect oceanic samples, and it will also go beyond strict biology. Swensen said it will also focus on the history of the Caribbean, the sociology behind what humans brought to the island and how sailors navigated the islands hundreds of years ago.

On the cruise, students will be divided into watch groups that are given different responsibilities depending on the shift. While some watch shift duties will include collecting samples, others will involve boat maintenance, like cleaning and cooking or navigating and steering the boat. SEA members will assist the students.

Freshman Emma Nelton said she was primarily interested in the class for the Caribbean cruise, but she also wants to take advantage of the broader subject matter the class will offer. She said the many different topics covered in the class will allow her to take a step away from her many classes just focused on science.

“There’s a lot of focus on human impact on the Caribbean,” she said. “That’ll be a fascinating part, because I do like taking classes that are in other areas, and I don’t actually have the space to do that in my schedule next semester, so it’ll be nice to have one class that’s not quite so narrowly focused.”

Junior Kassie Wahlstrom signed up for the class after hearing about the sailing trip. In addition to biology, Wahlstrom majors in anthropology and has a minor in Spanish. She thought the different aspects of the class would be a perfect combination of her interests.

“We’ll be stopping in a small village in Puerto Rico, which will also be interesting, because I’m an anthropology major, and just to go to the village, speak Spanish with them and learn about their life there,” she said. “It’s the perfect mesh of biology, Spanish and anthropology.”

Students who take the class are not required to go on the 10-day trip, but those who intend to go on the cruise must put down a $500 deposit in August, which is just one of the expenses Wahlstrom said she thinks is preventing more students from signing up. There are about 20 students signed up for the fall course.

There will be no cell phone or Internet service on the boat, and students will be living in close quarters, but Nelton said the conditions of the cruise do not perturb her, despite the fact she has never been on a sailboat like the one they will use.

“As an individual, it’s something I’d be comfortable with,” she said. “It’s 10 days. I’m not overly concerned. I think it’ll be nice to step out of civilization for a while.”