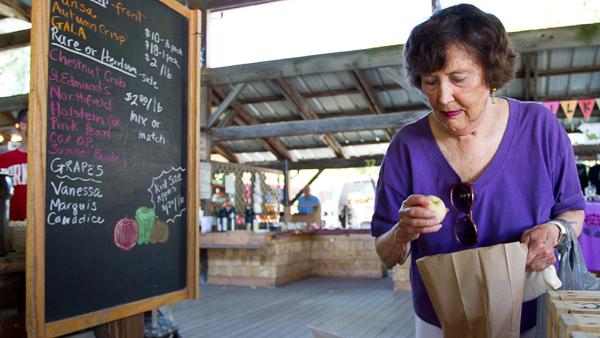 Rachel Woolf/The Ithacan
Carol Lewis, of Ithaca picks out Sansa apples from Black Diamond Farm's stand at the Farmers Market Saturday afternoon.
By Karly Placek — Contributing Writer
Published: September 6, 2012
Following what the U.S. Drought Monitor is calling the worst drought in five years, Ithaca farms have seen a drop in vegetable crop production.Ithaca received seven inches of rain between June and this week, which is three inches less than the seasonal average, according to the Northeast Regional Climate Center.However, the Finger Lakes region is experiencing a level D1 drought, which is classified as moderate. Level D3 and D4 droughts, which are the more extreme, are occurring in regions in the Midwest.National vegetable yield estimates have plummeted because of the scarcity of rain. In the World Agricultural Supply and Demand Estimates report by the United States Department of Agriculture, corn growers are expected to average 123 bushels per acre, which is the lowest average yield in 17 years.

Food prices for next year are expected to rise as much as 5 percent, according to the USDA.

Jackie Merwin, orchardist at Black Diamond Farm in Trumansburg, N.Y., said the drought this summer was a harsh blow to her apple production.

“We have an estimated 60 percent loss of our apple crop,” Merwin said. “We also have smaller fruit than what we normally have.”

Other crops, such as string beans, have also been hit by the drought. Janet Mandeville, who grows vegetables at Mandeville Farm, said she lost a large amount of strings beans and was unable to sell them to local markets. She said she also lost about two and a half acres of corn.

In an effort to combat the drought, farmers made up for the lack of rain by buying their own irrigation systems.

“We finally bought an irrigation hose to reach our field,” Mandeville said.

While Mandeville said the irrigation hose was expensive, it would be more costly to lose $500 worth of bean seeds again next year because of poor irrigation.

At Black Diamond Farm, the season could have been worse if the farm didn’t have a pond for irrigation, Merwin said.

“If we didn’t have that pond, we’d be up a creek without a paddle,” Merwin said.

Though the dry weather affected some produce, it left others unharmed. Senior Bella Ciabattoni, co-manager of the Ithaca College Organic Garden said crops of watermelon and potatoes actually grew more successfully after many problematic years.

“It might seem counter-intuitive, but watermelon prefer the hotter environment,” Ciabattoni said. “That’s why they’re so successful down south.”

Though there were some positive effects, the drought still took a toll on the college’s organic garden. The cucumbers shriveled up early in the season.

Students also had to spend more time watering. The garden has a rain gauge near the beds that should measure a half-inch each time a student waters.

“There wasn’t a lot of natural rain so we had to water way more,” Ciabattoni said. “We had to keep up with that half inch of watering every time we did it.”

The summer’s dry conditions also affected flowers, which produce fewer buds when the weather is hot and dry. However, for Duane Waid of Waid’s Honey and Candles in Interlaken, N.Y., the lack of rain and healthy flowers didn’t deter his bees. The bees simply worked on flowers that thrived in dry weather.

“If all the flowers dried up, which I thought would happen, then [the drought] would have really hurt us, but bees are really adaptable,” Waid said.

Despite the negative effects her farm suffered because of the drought, Mandeville said she is optimistic.

“We’re hoping it gets better next year,” Mandeville said. “Hopefully not another drought.”