Those making a trip to Ithaca’s Inlet this weekend will see a different scene than the usual bustle of restaurants and businesses on the West End. 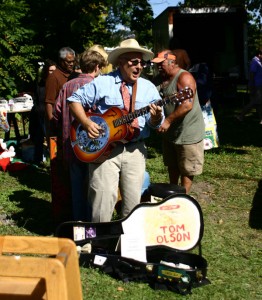 Ithaca musician Tom Olson plays his guitar at the Rhiner Festival in 2009. The festival celebrates the history of the city’s Rhine area in the 1920s.

Instead, the neighborhood will roar with 1920s street music and other sounds of Ithaca’s past, as the city celebrates the 3rd annual Rhiner Festival from Friday to Sunday.

Ithaca’s West End, or Rhine area, dates back to the turn of the 19th century, when immigrants from Europe and other parts of the U.S. settled in shanty houses near the city’s waterfront.

Festival coordinator Wylie Schwartz said she first started the event in 2009 to educate and commemorate the neighborhood’s colorful history.

Scott Callan, director of the Tompkins County History Center, said the neighborhood was known for its moonshine production and gambling. The History Center is co-sponsoring the festival.

“It developed this reputation for kind of having a rough-and-tumble character to it,” Callan said.

To capture the neighborhood’s eccentric history, Schwartz said, the Rhiner Festival is expanding to a three-day event with the year 1916 as its theme. The festival highlights the year the Wharton Brothers Studios made more than 30 films and features, many of which were shot in Ithaca.

“We tried to recreate the feeling of what it was like in the silent film era,” Schwartz said. “We have musicians who are sitting on every street corner. We have interesting games like ‘Moonshine Toss,’ and we have a little flea market — all kinds of activities.”

But the festival’s biggest party takes place Saturday night, when Castaways will transform into a 1920s style speakeasy.

Event organizer Heather Hallagan said the Moonshine Island Speakeasy Party embodies the spirit of what she describes as “the red light district of Ithaca,” with participants of all ages dressed in ’20s-style flapper dresses, feather boas and three-piece suits, complete with top hats and canes.

“It feels as if it’s becoming a really fun tradition for the town — to see such a cross-section of life,” she said.

Festivities will begin on Friday evening with a happy hour and dance party at Rhine House on West Seneca Street. The festival will also feature events at Ithaca’s Children’s Garden, in addition to the 7th Annual Farmer’s Ball at Steamboat Landing on Saturday night. Families are encouraged to share a dish and bring their own place setting for dinner at the Farmers Market.

Schwartz said she hopes to capture the fun flavor of the 1920s with this weekend’s events.

“We just sort of go wild with our festival,” she said.