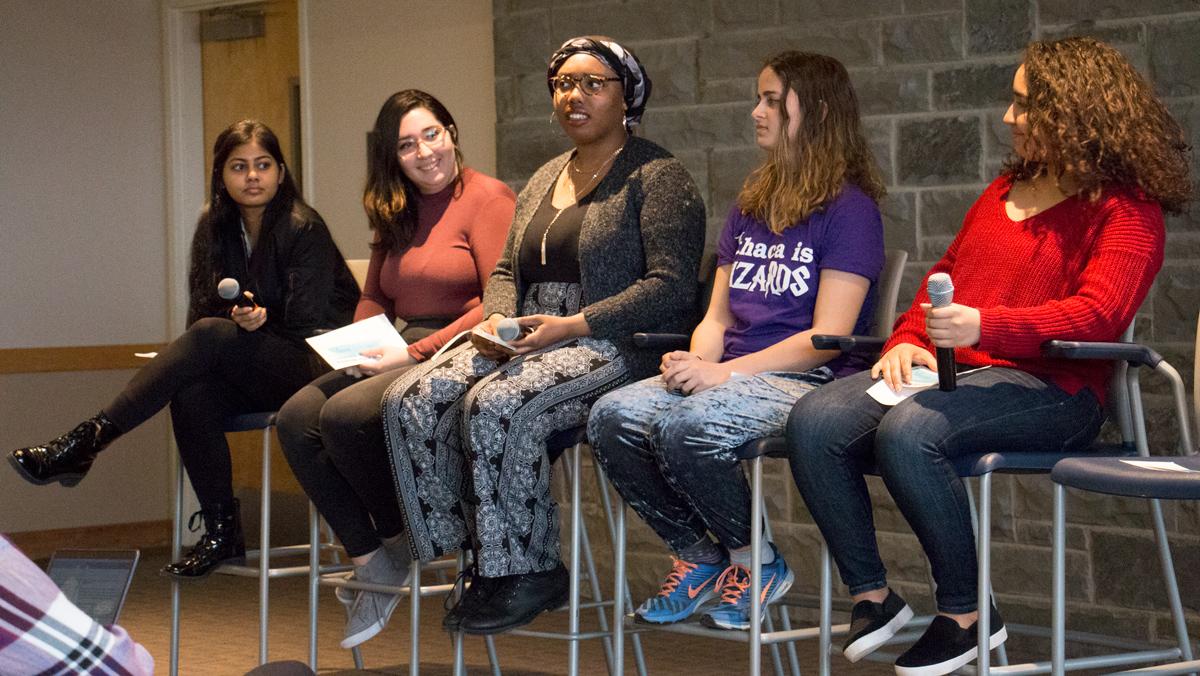 Jordyn Congelli/The Ithacan
Panelists spoke about their experiences applying to and excelling in college as a first-generation student April 6.
By Hannah Fitzpatrick — Staff Writer
Published: April 9, 2018

A panel of students at Ithaca College spoke about the additional pressures of being a first-generation student April 6. The event was the first in a monthlong Asian heritage celebration, Focus Asia Month.

The event was hosted by the Ithaca College Asian American Alliance and The First Generation Organization at the college. The panel consisted of junior Glenni Rodriguez Santos junior Nabilah Abdalla; junior Leticia Lynch; sophomore Nikkole Mora and freshmen Nusrat Islam, all of whom are first-generation students at the college. The panel discussed how being a first-generation student impacted their college application process and the additional pressures they face at college.

Many panelists said that being a first-generation college student creates a lot of pressure on students to excel and to give back to their families. Abdalla said she relates to this because she is stressed about doing well in classes and feels she has to take on extracurricular leadership roles.

“I feel that with academics, I have to take them more seriously because I don’t have a safety net to fall back on,” Abdalla said. “I can’t connect with a lot of other students because they’re much more relaxed, and that they wouldn’t understand the need for me to get as high a grade as I can in my classes.”

Freshman Katelyn Monaco, editorial board member of the Ithaca College Asian American Alliance, said she wanted to have this event so students would learn about the challenges that first–generation students experience from a firsthand perspective.

“We put this panel together so that people would have the opportunity to learn about the different struggles and experiences that first-generation students experience,” Monaco said. “It’s important to make sure that their voices are heard and that they get the support that they need from their peers and administration.”

Lynch said, as a first generation student, she feels similar pressure to be successful in her field to repay to her family.

“Being a first-generation student has definitely put pressure on me throughout my life,” Lynch said. “Even when I got to college, it gets even more stressful in terms of knowing that this is my time to give my parents back what they’ve given me through the sacrifices of getting me to college.”

Rodriguez said her high school guidance counselor was a crucial part of her support system during the college application process.

“She was there for every little step of the process,” Rodriguez said. “She pushed me to apply to schools that I never would have thought that I would be accepted to and helped me with my financial aid and essays. She was pretty much my support system throughout that whole process.”

“You’re more powerful than you know you are,” Lynch said. “You can do this.”