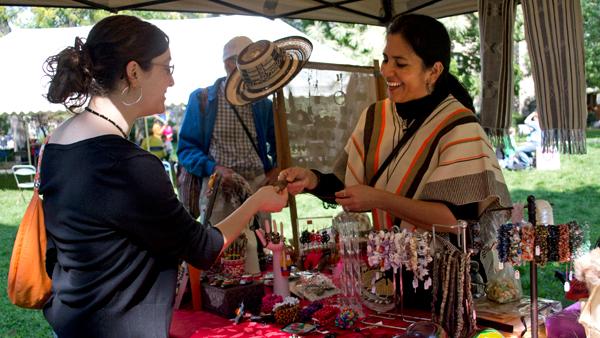 A web of music, dance, storytelling, craftwork and food lit up Dewitt Park on Sept. 29 as the First Peoples’ Festival brought the cultures of native peoples from across New York to Ithaca, part of an ongoing effort to educate the community and build relationships.

This was the third annual First Peoples’ Festival held in Dewitt Park downtown. Native festivals have occurred in the area for over a decade, previously at the Cayuga Strengthening Haudenosaunee-American Relations through Education Farm, Tutelo Park, and other area colleges. In 2010, the First Peoples’ Festival teamed with the Apple Harvest Festival to benefit from the large number of attendees.

Brooke Hansen, chair and professor of anthropology and coordinator of the Native American Studies minor at Ithaca College, which partially sponsors the festival, said the festival provides townspeople and students with an opportunity to learn about and connect to local native peoples.

“[They can] enter into a world and a culture that most of them probably know nothing
about,” Hansen said. “Talk to some of the vendors and the artists and the performers. They can learn about the lives of native peoples today.”

The festival celebrates not only the Cayuga people from around the area of Ithaca but from across New York as well.

“It’s important because a lot of people don’t understand that native people are still here. Their cultures somehow survived what happened to them,” Hansen said. “They’re revitalizing and making major contributions still to our societies and our ways of thinking about the world.”

Audrey Cooper, a Cherokee and the director of the Multicultural Resource Center in Ithaca, also a sponsor of the festival, said residents of Ithaca are sometimes unaware of the area’s history as the Cayuga homeland and the modern presence of native peoples.

“We’re very invisible to everybody,” Cooper said. “If we’re not wearing our regalia, then people don’t know that we’re here. So, for me, it’s a way to celebrate the culture, a way to educate the greater community on issues all-Indian and culture all-Indian so people can see we’re here.”

Throughout the day, a stage featured dance and music performances, while craftspeople and chefs sold products and shared history.

“We haven’t gone away,” Cooper said. “There are wonderful things to learn. To hear the traditional language spoken. To hear the music.”

Alfred Jacques, an Onondaga who builds wooden crafts, like lacrosse sticks, said he comes to the festival every year. He often discusses native games, like the evolution of the Haudenosaunee or Iroquois stickball into modern lacrosse.

Ernie Olson, professor of anthropology at Wells College, a sponsor of the festival and a member of the Central New York Native American Consortium and Neighbors of Onondaga Nation, said it is important to relate the history and culture of native peoples to present-day Ithaca.

“It’s just really important, I think, to know the history of the place you’re in,” Olson said. “If you’re traveling through a place, learn something about the place and the original people and the people who are there now and about local culture.”

Hansen said she sees the festival as a way to start cooperating and building relationships.

“We need to understand they’re still here and have struggles we can help work on,” Hansen said. “Educating, honoring the treaties, dispelling stereotypes, getting rid of native mascots, which are very offensive to a lot of native people. [There is] so much work to be done, so the festival is a great way to open the door, have everyone be there together, listening to music, sharing food, talking, getting to know each other, which is always the first step in an educational process.”