First-year residence halls to expand in the fall 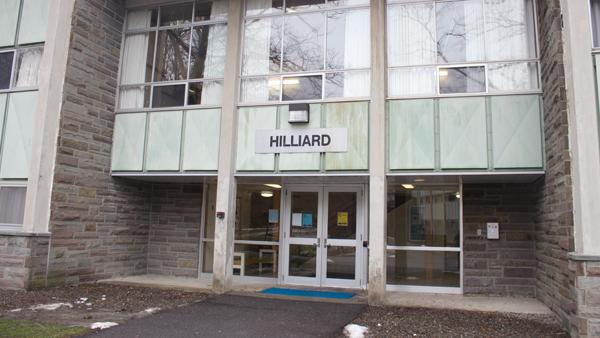 Sabrina Knight/The Ithacan
The First-Year Residential Experience is expanding to include Hilliard and Holmes halls. By 2013, 1,100 freshman will be a part of FYRE.
By Nicole Ogrysko — Senior Writer
Published: January 31, 2013

The First-Year Residential Experience is again expanding its housing options. By Fall 2013, only freshman will be able to live in Hilliard and Holmes Halls, in addition to Boothroyd, Rowland, Tallcott and both East and West Towers.

The expansion is part of the college’s IC 20/20 goals that require all incoming freshman to live in FYRE halls, Ron Trunzo, associate director of residential life and judicial affairs, said.

The expansion next fall will bring about 200 more freshmen into the FYRE program, or about 1,100 freshmen in total. By 2014, the college will expand FYRE further, adding Bogart, Eastman, Hood, Landon and Lyon halls to the freshman housing pool, Trunzo said. Depending on the size of 2014’s incoming freshman class, some first-year students may also live in Clarke Hall.

Trunzo said the impact on rising upperclassmen looking to live on campus for the 2013-14 school year will be minimal.

“The main impact with Hilliard and Holmes is that anyone that’s currently living in those buildings cannot elect to live there next year,” Trunzo said. “They can’t squat a room in Hilliard or Holmes for that reason.”

With all of the upper quads and most of the lower quads reserved for incoming freshmen, upperclassmen will have Emerson Hall and the Terraces available starting in the fall of 2014.

To accommodate upperclassmen who want to live in substance-free housing, Trunzo said the Office of Residential Life is discussing the option of adding a Terrace building or designating a section of another residence hall as “substance free” by Fall 2014.

Beginning in Fall 2013, each faculty associate will organize programs based on one of IC 20/20’s six academic Integrative Core Curriculum themes for students in the residence halls.

“One of the ways a student feels a strong connection with an institution is to make connections with staff and faculty,” Trunzo said. “That’s a way to facilitate that connection. Obviously they’ll see faculty in class, but they will also hopefully have some really positive connections with them in their living community.”

Sophomore Emily Francis, a FYRE residence assistant in the East Tower, said residence assistants in the first-year residential program are required to meet higher expectations and are given more funding than RAs working with upperclassmen. As an RA working for FYRE, Francis said she is required to organize eight programs each semester — activities designed to appeal to first-year students.

Francis held an event called “Letters Home” last fall, where freshman wrote letters to their families, and the college footed the bill for postage. Other FYRE events — such as movie nights and speakers like Maura Cullen’s annual talk on diversity — are designed to teach freshmen about the college and encourage them to make friends.

Freshman Mike Kaminskas said he wanted to live in the FYRE program because he hoped living with all freshmen would help him meet new people.

“You meet so many new people in the first few weeks, and I have friends with all the people in the Towers in the program,” Kaminskas said. “The closer you are, you just stay tighter knit. Everyone’s in the same boat, adjusting to classes, living with other people.”

Trunzo said next year’s expansion requires the Office of Residential Life to hire about 15 new RAs and relocate RAs currently working in the Terraces to the FYRE program over the next two years. Unlike upperclassmen residence halls where each floor is assigned one RA, Trunzo said Residential Life will continue to place two RAs on each floor of the quad buildings — one on each side.

Trunzo also said the college will create a new, full-time position within the Office of Residential Life to manage the FYRE program.

The added cost of hiring new RAs, a FYRE director and faculty associates, plus allocating more funds for programs in each FYRE residence hall, will cost the college more, Trunzo said. He said the money will come from the IC 20/20 Initiative.

Though Francis said she sees the benefits of a first-year program, she said the additional programs and stress of keeping her freshman residents safe bring anxiety to the job.

“When I talk to FYRE RAs, I feel like my hair’s going gray,” Francis said. “Other RAs have an easier job, and other RAs know that.”