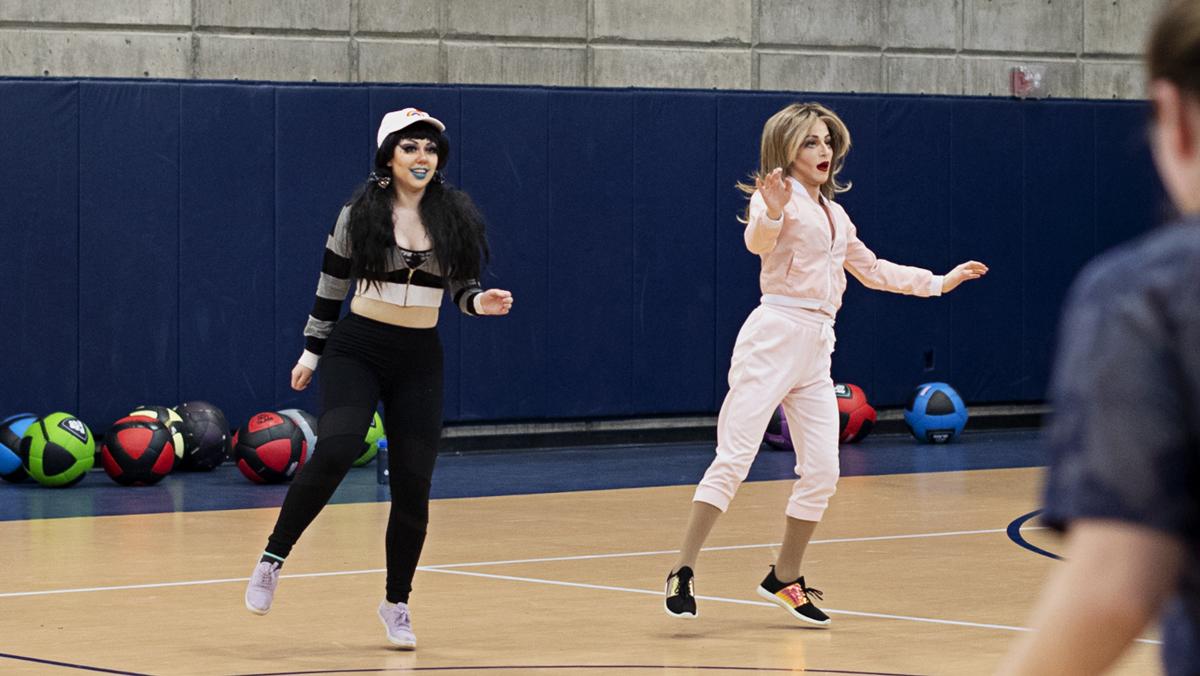 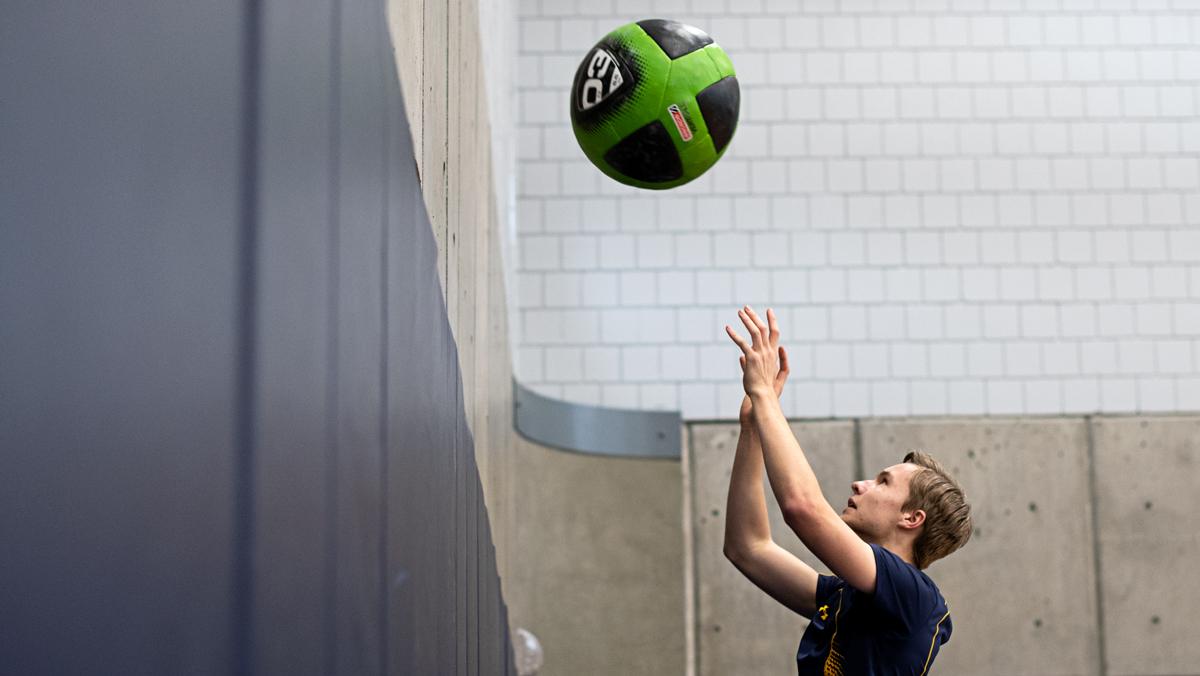 At the event, sophomore Colin Jacob exercises with a medicine ball, one of the many exercises included in the 45-minute workout event. Kristen Harrison/The Ithacan 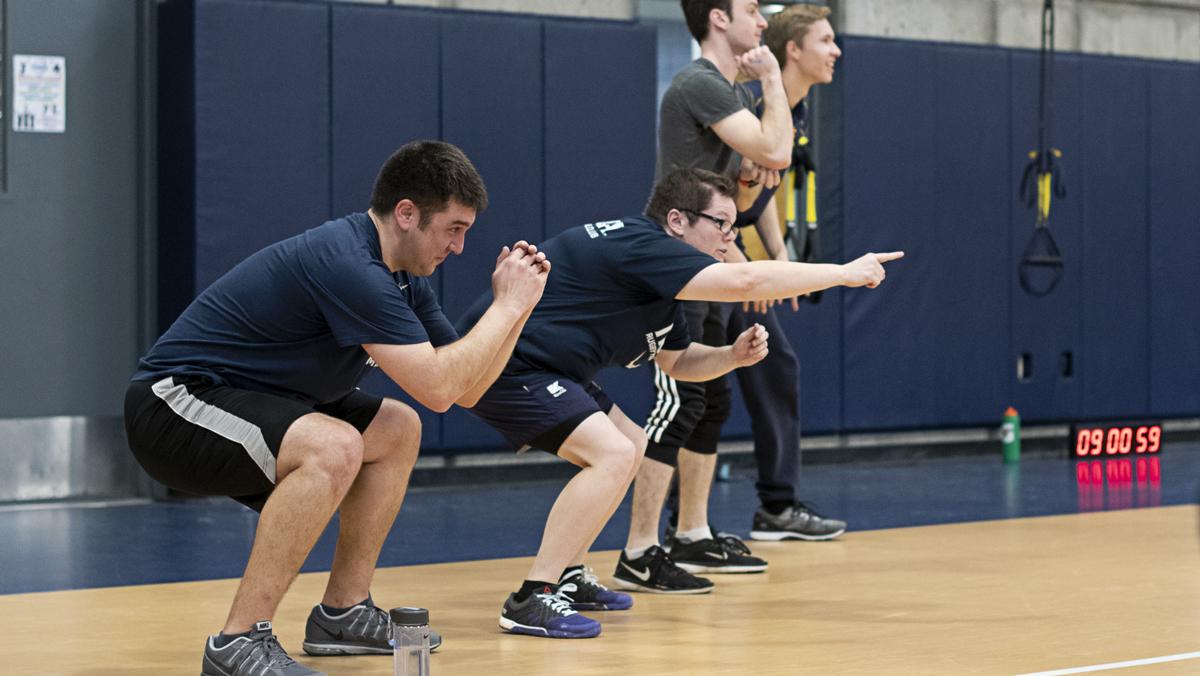 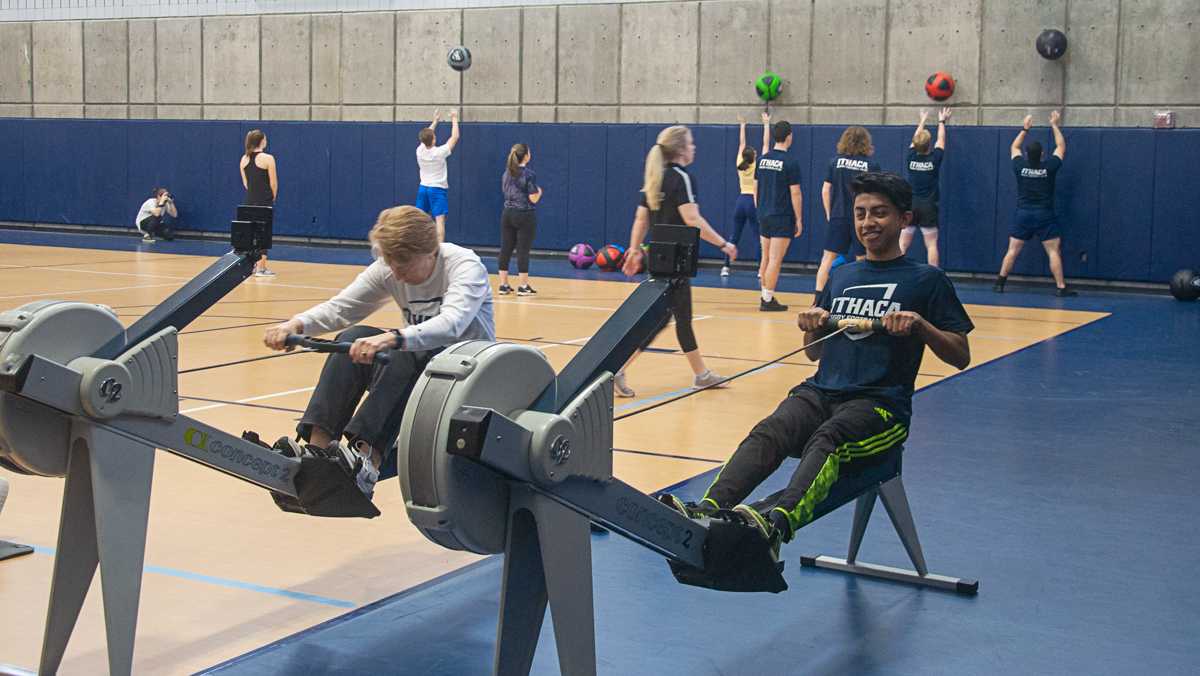 The event raised money for the OUT foundation, an organization that helps LGBTQ community members feel comfortable with their bodies. Qiuyang Chen/The Ithacan 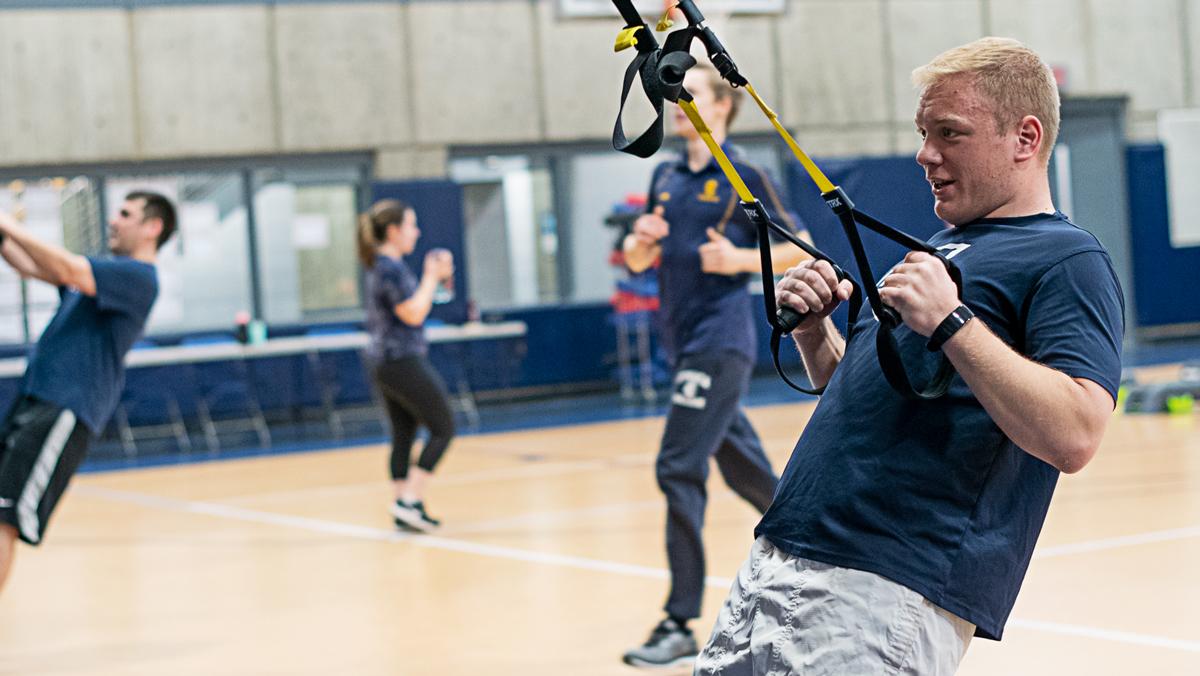 Senior Drew Mele uses a TRX rope, one of the workouts during the event. Kristen Harrison/The Ithacan 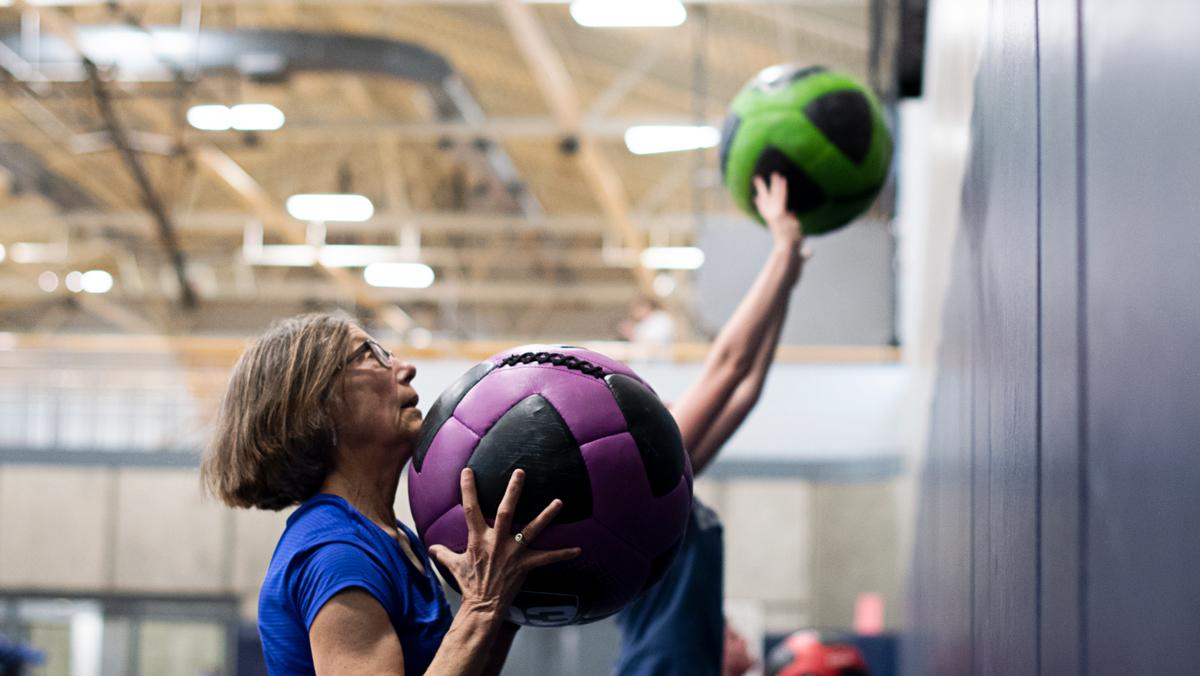 Sally Webster exercises with a medicine ball as she participates in the colleges inaugural workOUT event. Qiuyang Chen/The Ithacan

It had been an intense workout. Participants had their hands on their knees, breathing heavily. They had endured 45 minutes of exercise after exercise, each one increasing in difficulty. And then, as everyone was finally able to catch their breath, the drag queens came out, treating the audience to dance routine while “Cotton Eye Joe” played in the background.

The event, workOUT, took place in the Fitness Center at Ithaca College. The event was intended to promote inclusivity in an athletic setting, specifically for LGBTQ people. In addition to intense workouts and drag queen entertainment, information tables on sexual health and the college’s LGBTQ friendly organization PRISM were also present. Approximately 25 people attended the event, all contributing to its mission to reinvent athletic spaces that are often heteronormative and hypermasculinized.

People, usually men, who go to gyms sometimes perpetuate an environment of toxic masculinity, which is a term used to describe sexist, homophobic and hyperdominant behavior. This behavior is unwelcoming, and sometimes threatening, to those who do not frequent gyms or who identify outside of binary gender categories.

The event charged a $5 fee to raise money for The OUT Foundation, an organization that helps those in the LGBTQ community feel more comfortable with their bodies and helps remove barriers blocking LGBTQ individuals’ access to health, wellness and fitness. The foundation assists young adults in the LGBTQ community by providing scholarships, funding gender surgeries and helping them navigate Medicaid requirements.

Mott, who organized the event, said he wanted to host it in order to help make the Fitness Center a more inclusive environment for some LGBTQ individuals who may feel it is a space only for athletes or those who work out often.

Mott works at the Fitness Center as a personal trainer, and he organized the event along with Sean Reilley, program coordinator in the Office of Recreational Sports. Mott said that the Fitness Center currently has gender–neutral locker rooms and bathrooms and that he believes the fitness instructors create an inclusive environment.

“An inclusive environment is anything from making sure a beginner feels comfortable in class to making sure a varsity feels comfortable in class,” Mott said. “We offer pronoun pins for anyone to wear if they want — a lot of our instructors wear, lot of our staff wear them. And we’re all really receptive to being like, ‘I’m sorry I made a mistake, let’s learn from this.’”

Luca Maurer, director for the Center for LGBT Education, who helped table the event and participated in the workOUT, said an event like this is helpful for members of the LGBTQ community because it helps them feel more comfortable in a fitness environment. Maurer said it can be difficult for members of the LGBTQ community to workout due to stereotypes associated with the community.

“Many members of the LGBTQ community can look back, especially to childhood and bullying that frequently takes place in gym class and locker rooms,” Maurer said. “There are stereotypes. Stereotypes that say that gay men aren’t athletic, that all lesbian women are and, again, they’re only that — stereotypes. But they can serve as barriers.”

Maurer said part of his job is providing training to the Fitness Center staff on how to be sensitive and inclusive to those who utilize the gym.

Across the country, there have been gyms that try to cater to an LGBTQ audience, like the Queer Gym in Oakland, California, and aim to make the gym environment a more inclusive space for people of all gender identities and body types.

Maurer said he and Mott have talked about different gyms around the country that make their members feel more welcome.

“I know that there are some other gyms and fitness centers around the country that specifically reach out to LGBTQ communities,” Maurer said. “Trying to glean from those model programs, what works, what doesn’t work.”

Representing PRISM at the event were the co-presidents of the club, juniors Thomas Conti and Jackie Venom. Venom said PRISM was asked by Mott to come to the workout, and Venom thought it would increase the club’s reach on campus.

“We also wanted to promote our club but also expand our reach on campus,” Venom said. “We know our sphere of people that normally come to our events are somewhat limited. We wanted to reach an audience that we might not get just doing our drag shows and just doing our meetings.”

“It’s been a very fun partnership, and we would definitely do it again in the future,” Venom said. “I don’t, the gym is not my wheelhouse. I’m not very comfortable here. … I am personally anxious whenever I go to the Fitness Center because I never go and am paranoid I will be judged for being out of shape. I also struggle with chronic joint pain, making it hard for me to want to work out.”

Junior Daisy Rudin said she enjoyed the workout and said she is happy that the money went to a cause like the OUT foundation.

“I liked it a lot,” Rudin said. “It was great to get a workout in, but also it’s for a great cause. It was great to donate money so someone else could get something out of it too.”