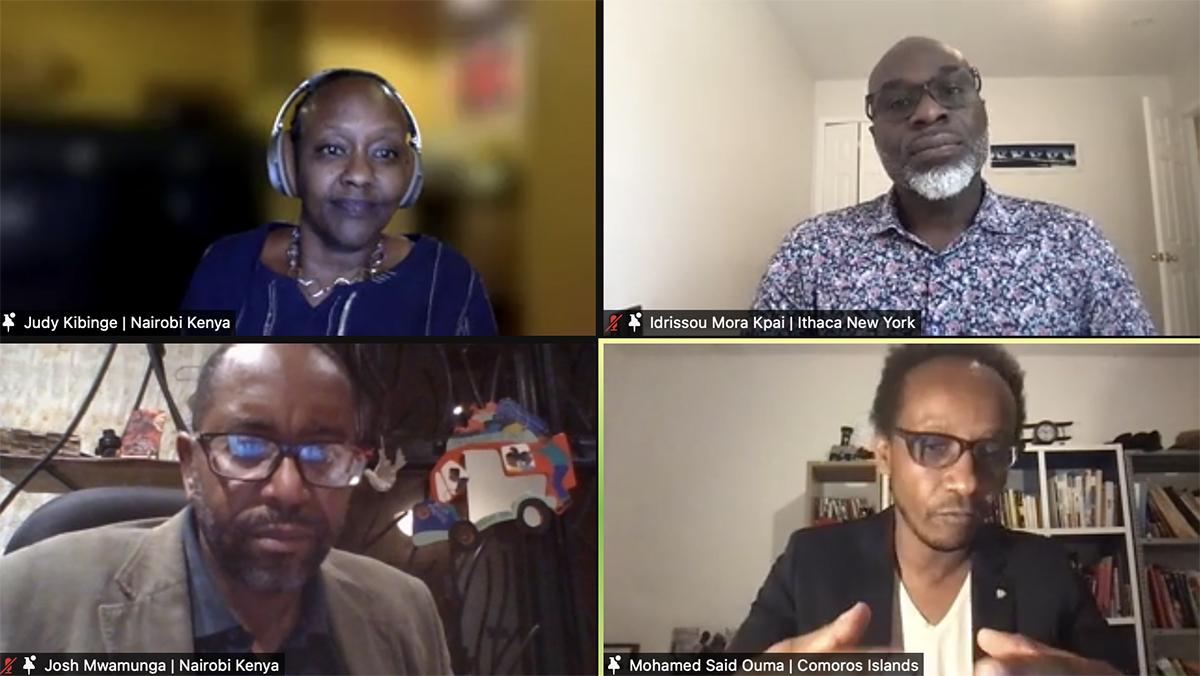 The event, titled “Who Owns the Story? Documentary in Africa,” took place Sept. 27 and featured a roundtable with researchers, producers and filmmakers from across Africa. The panelists included Hawa Essuman; Judy Kibinge, filmmaker and founder of DOCUBOX; Idrissou Mora-Kpai, assistant professor in the Department of Media Arts, Sciences and Studies, and an award winning Bininese filmmaker; Josh Mwamungu, filmmaker; Mohamed Said Ouma, executive director of DocA; and was moderated by Nyambok Onyore Austin, the current Communications Officer at Documentary Africa (DocA), and discussed issues regarding creativity, funding and ownership in Africa’s documentary industry.

Funding was one of the main topics of discussion and Kiginge said that in her prior experience, the person who pays for the creation of the film tends to have complete control over the content.

“As a filmmaker who has made a number of films, one thing became very clear: he who has the money decides who tells the story,” Kibinge said.

Kibinge later said she feels discontent with the ongoing narrative that African filmmakers need money from western countries, like the United States, to fund their projects in order to create an award winning film, using Maia Lekow and Chris King’s “The Letter” as an example of a low–budget, award–winning film.

“I cannot count enough of the stories that have come out that are award–winning, that have traveled and that are soaked in blood, sweat and tears,” Kibinge said. “And I’m not joking. Honestly, you look at a film like ‘The Letter,’ that film took six years to make. It has won awards. This myth that we are not creating this incredible work is not quite true. I think the thing we need to understand is there is not quite a level playing field here.”

Mora-Kpai, a Beninese filmmaker whose films have been recognized at the Berlin, Rotterdam, Vienna, Milano, Busan, Sheffield, Cinéma du Réel and FID Marseille film festivals, said he believes that the West is altering Africa’s stories, taking away from its authenticity.

“African history has been distorted by the West and the story that we [Africans] are being told is not from our perspective,” Mora-Kpai said.

“What version of our story is out there that we can agree with?” Essuman asked.

One of the main points continuously mentioned throughout the discussion was Africa’s poverty and its correlation to the film industry. Mora-Kpai believes that it is not an issue of poverty, but an issue of how resources are used.

“Yesterday I was online and saw in one of the African countries a president who was just traveling within the country with 50 cars,” Mora-Kpai said. “One president with 50 cars. So how can we complain that we don’t have money?”

Ouma added to this point explaining that if the money spent on one of the cars was spent towards filmmaking, 10 stories could be told through the lens of African storytellers.

As the discussion segment ended, Kibinge discussed what it would take in order to fix the ongoing issues in the African documentary-making industry.

“A group that will pull together and say we need to put together a whole network of African producers and exchange information,” Kibinge said. “This conversation, this is how it begins. This is how we change things. Because documentaries have a much bigger social capital payback. It may not rock in the box office money, but it still takes a lot of blood, sweat and tears to make and it needs a network of us. Convinced and pushy, making sure not just our broadcasters, but other global broadcasters, realize that there is something really special going on in this continent.”

The next discussion in the Global Doc Media Series will include analysis of Raoul Peck’s HBO series “Exterminate All the Brutes” and will be held Oct. 4.