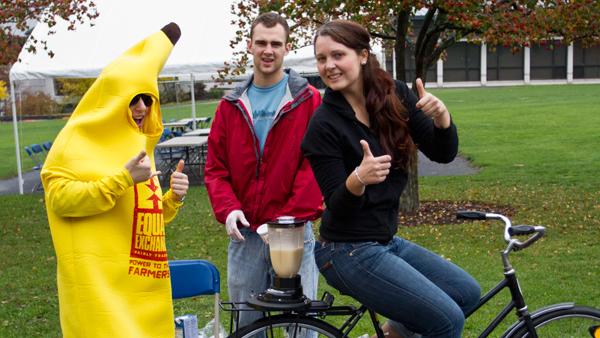 Student groups across Ithaca College hosted events Wednesday in celebration of this year’s Food Day, a nationally recognized movement that aims to reduce hunger and increase the availability of healthy, affordable and sustainable food.

Food Day began in Washington, D.C., with the Center for Science in the Public Interest, a national advocacy group that is involved with nutrition, food safety and passing laws, such as requiring food packaging labels to list all ingredients and defining what foods are organic.

Nancy Huehnergarth, the New York State coordinator for this year’s Food Day, has worked with CSPI for years and said that they are responsible for creating Food Day and bringing it to national attention. She said because they were a national group with national contacts, they were able to spread the word to  young people nationwide.

“When you’re in college, you tend to be more politically active and aware and open minded,” Huehnergarth said. “Today’s college students really are in the forefront of understanding that our food system needs a lot of work.”

Beginning at 11 a.m., IC Food For Thought, Bomber Bikes, GreenStar, REMP and the Nutrition Club were out on campus providing information about their organizations and how they correlated with Food Day. The main event was Food in the Nude, which was a presentation about where our food comes from.

In front of the Campus Center dining hall, a member from Bomber Bikes and a representative from GreenStar were blending smoothies using a bicycle, which provided power by spinning the blades in the blender to mix bananas and soy milk.

Lauren Goldberg, president of Bomber Bikes, was there to spread awareness of their organization and support Food Day by providing sustainable smoothies. The group invited GreenStar to bring their Fender Blender — their smoothie-making bike — to make smoothies.

“[We’re] promoting Bomber Bikes and just trying to bring the idea of bikes and food together,” Goldberg said.

Mariah Dahl from the marketing department at GreenStar brought the co-ops’ Fender Blender to make the smoothies and promote the idea that healthy food should be available to everyone.

“We are a cooperative business model, which means that we have a certain amount of support that we want to give to the community and be a part of the community,” Dahl said.

In the Klingenstein Lounge, IC Food For Thought promoted Rise up For Rice — an online trivia challenge where every question answered correctly donates 10 grains of rice to the U.N. World Food Program.

Senior Lethia McFarland has been hosting this event with IC Food For Thought for the past three years. Though FreeRice.com operates on a daily basis, on Wednesday Food For Thought and IC Dining Services partnered to raise awareness for Food Day.

“The most important thing Food Day can stress is that everybody has a role, no matter how small or large it is,” McFarland said. “Ten grains of rice doesn’t seem like very much, but collectively if we do this together, then we can really make a change.”

At the Terrace dining hall, the Nutrition Club had a table to promote healthy eating on campus.

According to the American Heart Association, most Americans do not getting the daily recommended serving of fruits and vegetables, and poor diet in conjunction with little or no exercise among young people has been linked to higher and earlier death rates in adulthood.

Junior Lindsay Simpson, a member of the Nutrition Club, said their main goal was to increase nutritional awareness and give people a visual on what portions they should be eating. The group also handed out quizzes on nutrition, and students could check their answers at the table.

The main event in the Terrace dining hall, Food in the Nude, was sponsored by Ithaca Dining Services and organized by student interns. The event provided a workshop for students to analyze the ingredients typically found in processed food.

Those attending the event were broken up into two groups and were instructed to find the global origin of certain ingredients in either a bag of Doritos or a bag of Cheez-Its.

Toward the end of the presentation, the groups came back together to discuss what they found and where the ingredients originated. A PowerPoint  was presented about the ingredients in processed foods, how many “food miles” the food actually traveled and how much CO2 was emitted per mile.

Stephanie Piech, sustainability coordinator for Sodexo, helped to organize the main event that was mainly presented by sustainability and nutrition interns.

“Food Day is all about eating real, so today we highlighted some ways that you can eat real on campus,” Piech said. “Food security is a big part of it too, the chance to have good food, not just Doritos or Cheez-Its, but food that can actually nourish you.”