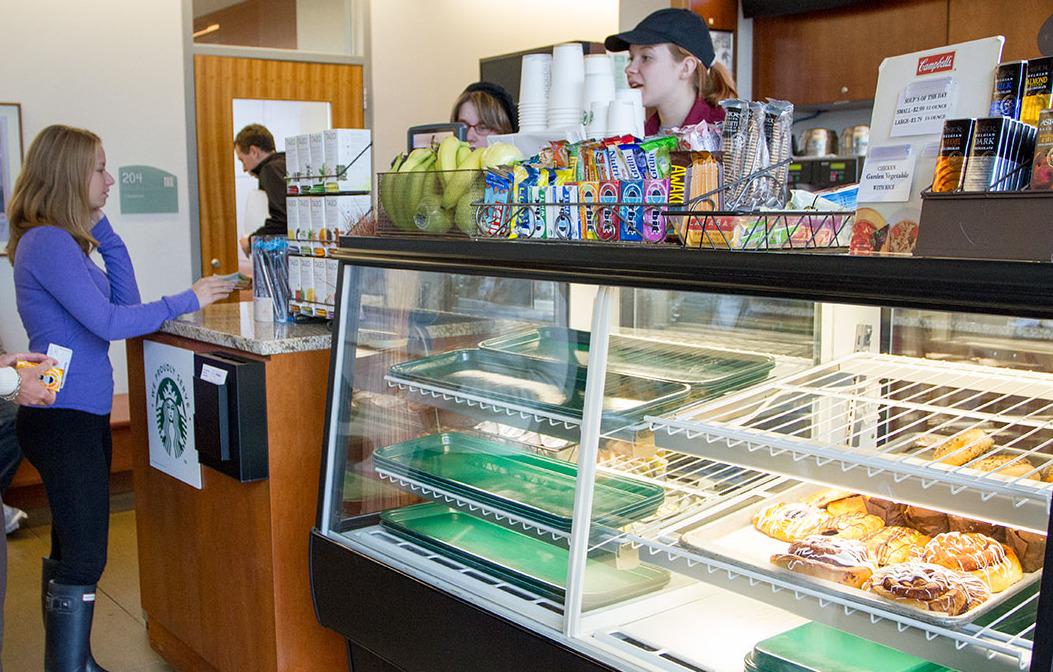 If a student purchases a bagel at an Ithaca College on-campus cafe, that bagel costs $1.49. However, a bagel only costs 79 cents at the local Wegmans and 80 cents at the Ithaca Coffee Company.

A comparative analysis of the prices at the cafe at the Roy H. Park School of Communications, the Center for Health Sciences Coffee Cart and the cafe in the Business School on campus to off campus-competitors reveals that the prices at on-campus retail locations are generally higher than comparable locations in town.

Along with the more expensive bagels, retail carts on campus charge $1.99 for a cookie, while similarly sized cookies cost $1.95 at Starbucks and $1.50 at the Ithaca Coffee Company.

Fruit is also significantly more expensive at the campus retail carts than at options in town. The Park School cafe charges 99 cents for a banana, while at Wegmans, bananas are 49 cents per pound. A bunch of six bananas is about 2.4 pounds, so six bananas would cost $1.17, resulting in a unit price of about 20 cents.

Jeff Scott, the area general manager for Sodexo, Ithaca College’s dining services provider, said the prices are based off the market average, and Sodexo aims to be competitive with local competitors.

“If you think the cost of coffee is too high, that’s your opinion,” he said. “We try to be comparable to what you would pay for a similar item off campus at a retail establishment.”

Scott said instead of comparing to a grocery store, pricing should be compared to a more similar location. For example, Collegetown Bagels also charges $1.00 for fresh fruit.

He said twice a year, Sodexo does a comprehensive pricing analysis, which compares its pricing to like competitors. For example, he said, the prices at SubConnection would be compared to prices at Subway.

“We assess all of our prices against the competition,” he said. “We try to compare with as like an establishment as possible. … We try to position ourselves on market average.”

Comparison to selected off-campus competition also puts the prices of coffee and most bakery items at on-campus locations slightly above the prices at similar off-campus options.

The on-campus locations charge more for a 12-ounce cup of coffee than Waffle Frolic, Starbucks, the Crow’s Nest Cafe, Collegetown Bagels and the Ithaca Coffee Company. On-campus locations also charge above the average for the 16-ounce and 20-ounce cups of coffee.

A double espresso at the Business School cafe costs $2.49, while the same product costs $1.75 at Collegetown Bagels, $2 at the Ithaca Coffee Company and $1.95 at Starbucks.

Graduate student Jessica Walton shops at the CHS Coffee Cart and said she thinks the prices are too high.

“I think the prices are very expensive,” she said. “I use it as a last resort if I’m running late. It’s convenient but expensive.”

However, many students believed the higher prices were worth the convenience of the locations, including senior Eric Gottschalk.

Grad student Luis Naupari said he isn’t bothered by the higher prices at the Business School Cafe because he understands why they are high.

“It’s expensive because it’s convenient,” he said. “We’re paying to have it right near your classroom.”

Jennifer Hensley, a second-year grad student, said food and drink at the CHS Coffee Cart are overpriced, but she said she doesn’t think this would not affect buyership.

“They can charge whatever they want and people are still going to buy it,” she said.

The GW Hatchet, the school newspaper of George Washington University in Washington, D.C., reported that prices at Sodexo-controlled J Street were also more expensive than off-campus options. In the article “The hidden costs of campus dining,” by Chloe Sorvino, George Washington’s Head of Dining Services, Nancy Haaga, said Sodexo compares prices from about 12 “popular campus restaurants” once a year and charges students 5 to 10 percent less. The Hatchet, however, found that prices at J Street were higher than most other options.

“We try to position ourselves where the market average is, where we think our customers will be reasonably comfortable with the pricing,” he said.