For the global good 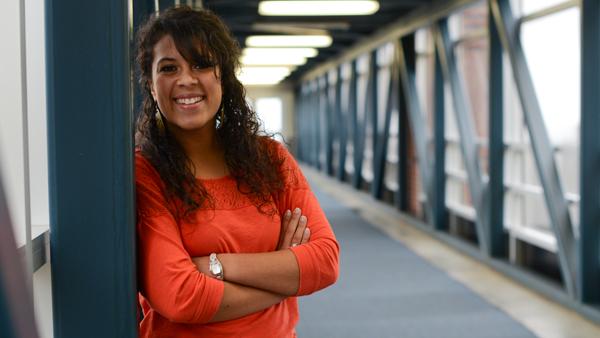 Senior Lethia McFarland always wanted to make a difference but wasn’t sure how.

She found her direction when she came to Ithaca College through the Martin Luther King Scholar Program. Now, she lives out King’s message of social justice as the president of two activism organizations at the college: Food for Thought, a nonprofit dedicated to combating malnutrition in children, and Free the Slaves, which works to end worldwide slavery.

“People think I’m crazy for trying to lead both the organizations, and in some ways, I’m sure I am,” McFarland said. “But it’s really the most important to me to make sure that I spread those messages and that the most people are infected with that knowledge so that they may have the same fire lit in them that was in me.”

Her early volunteer work played a major role in igniting that spark of activism, though unbeknownst to her at the time.

As a high school student in Lancaster, Pa., she made weekly trips to Ephrata Community Hospital and visited with patients who were undergoing electromyography testing, which analyzes the electrical activity of skeletal muscles, to diagnose muscular or nervous conditions.

“Those experiences really exposed me for the first time to service even in the smallest capacity and how I could help other people, and it just really ignited a passion for me to help people in whatever capacity I could,” McFarland said.

Sophomore Ayesha Patel, treasurer of Food for Thought, said that McFarland’s enthusiasm and friendliness have been integral components of the organization’s success, especially at their Tuesday night meetings.

“She’s always trying to interact with our new members and making sure that they’re talking during our meetings and letting their opinions get heard,” Patel said. “Immediately, people start enjoying the conversation, and I think that she really drives that.”

During McFarland’s short term as president, the organization raised more than $4,000 at its sixth annual Walk for Plumpy’nut on Oct. 7, to provide a peanut-butter-based nutrition supplement to malnourished children.

“You can definitely tell that she’s passionate about the organization,” Patel said. “Walk for Plumpy’nut was such a stressful event to plan just because it’s so big, and she was always calming us down, telling us ‘It’ll be fine.’ She was always a great support system for us.”

McFarland said that she has always wanted to make a difference, but the Martin Luther King Scholar Program at the college gave her the confidence and drive to do so.

“It inspires you right from the beginning to act on things that you feel passionate about, to act on wrongs that you think should be righted,” McFarland said. “It really helped me with identifying my role in these issues where I saw problems.”

McFarland wanted to combine her passions for helping others and global health with her integrated marketing and communications major coursework into an internship at a non-profit organization.

Though she didn’t have much prior knowledge about HIV/AIDS activism, McFarland’s excitement about her internship was evident from the beginning, senior Jenna Jablonski, who also participated in the CIW program, said.

“Being her roommate, we had lots of late-night conversations about everything we were learning along the way,” Jablonski said. “She was really enthusiastic about being a part of a greater cause.”

McFarland quickly learned about EGPAF’s Project Help Expand Antiretroviral Therapy. The project aims to provide antiretroviral therapy, which helps to reduce the presence of HIV in the body and slow the development of AIDS in HIV-positive families in five countries over an eight-year period. For her final research project of the semester, she compared the success of the relief efforts of Project HEART to the success of other AIDS relief programs.

Her paper was named one of the top five research papers of the semester by David Silbey, associate director of CIW, and a team of four tutors who worked with the students on their papers.

Silbey said the first time he read McFarland’s paper, he knew it was one of the best papers because of its “intelligent and thoughtful exploration of the topic.”

Because of her internship, McFarland said, she can see herself having a career in HIV/AIDS activism. She is currently planning activities with Food for Thought in honor of World AIDS Day in December, and she hopes to go to graduate school to study human rights and global health.

“I might not be able to eliminate some kind of global issue from the world by myself, but I can make even the smallest difference,” she said. “And even if my contribution can help one person, it means the world to me.”