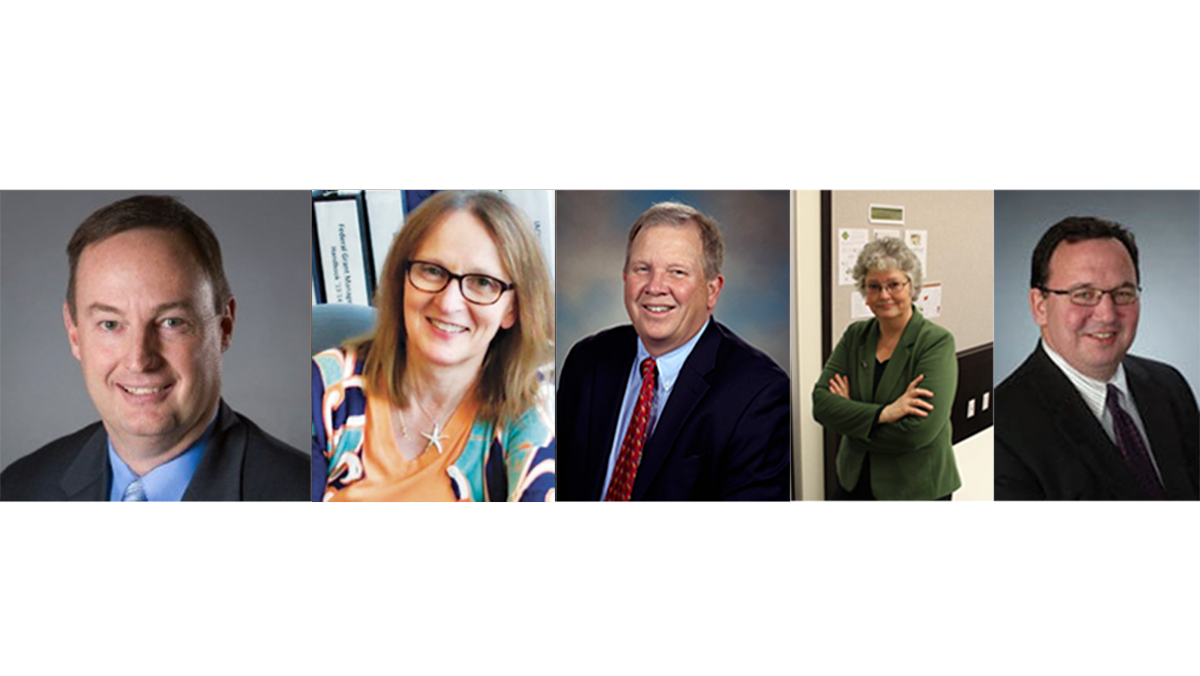 Courtesy of Wells College and Ithaca College
From left to right, former Ithaca College employees Robert Cree, Susan Weatherby, Mike Lindberg, Marian Brown and Craig Evans. They are among a number of people who have left the college to take positions at Wells College.
By Daniel Hart — Staff Writer
Published: February 10, 2016

In recent years, a number of Ithaca College employees have found that the next big step in their careers was just 30 miles away.

Five former Ithaca College administrative and staff members have left to take jobs at Wells College in the past two years, finding it offers more opportunities for personal career advancement and a greater impact on the campus community than at the college.

Furthermore, in the 2015–16 academic year, Robert Cree, former vice president of finance and administration, became chief financial officer; Craig Evans, former senior director of major and planned giving in the Office of Institutional Advancement and Communications, took the position of vice president for advancement; and Susan Weatherby, former accountant in financial services at the college, left Ithaca College Feb. 3 to become the controller at Wells.

For Cree, the job offer from Wells was an opportunity for advancement. As the chief financial officer at a smaller college, he said he can be more involved than he was able to be at Ithaca College and can see the more immediate impact of his work.

“It’s much harder to see the impact that you make on the institution as a whole when you’re working for a much larger institution,” he said.

“Wells gave me the opportunity to do a number of things I have always wanted to do,” he said. “One is teach. I’m able to teach a course. I oversee the physical education department, as well as direct and expand a program that’s gone from 14 sponsored NCAA Division III sports to 16.”

Michael McGreevey, vice president for institutional advancement at Otterbein University, was the executive assistant to former President Peggy Ryan Williams before taking a job at Wells in 2008, where he worked for eight years before starting his job at Otterbein on Oct. 19. He said the presence of several higher education institutions in the region provide opportunities for administration and staff members to advance their careers.

“Just like those moving to Wells, over the years several employees from Wells have moved on to bigger and/or different places in the region — Cornell, IC, Syracuse,” he said.

McGreevey said he has recommended Wells College to colleagues at Ithaca College as a potential place for career advancement, and vice versa.

For Brown, the decision to go to Wells was more personal. As the former special assistant for campus and community sustainability, Brown said she felt the college was not giving her the support she needed to advance sustainability initiatives.

“I think there was a feeling of, ‘We have two LEED Platinum buildings. We have recycling. We’ve done sustainability,’” she said. “There was just so much more work to be done.”

Brown said while Ithaca College has done much to make the campus more sustainable, there was not the same drive to improve that she feels at Wells. For example, at Wells, Brown teaches an introduction to sustainability course, something she did not receive enough faculty support for at Ithaca College.

“I had offered to teach it because we were looking for coursework around sustainability for the ICC Quest for a Sustainable Future, and we just weren’t getting enough faculty stepping forward,” she said. “It was unfortunate that it just wasn’t perceived to be something that was acceptable.”

“As a faculty member who is interested in sustainability, I would say that there is a core group of faculty here that are really interested in promoting that,” she said. “This was something that was completely faculty driven. Students got on board with this, and it has become to some degree a fabric of the institution.”

Evans is an alumnus of Ithaca College and said the college has prepared him well for his future at Wells. He will be transitioning from a middle management position at the college to leading alumni relations at Wells. For him, his support for the college made the decision to take a position at Wells difficult.

Kit Van Orman, manager of human resources and business services at Wells College, echoed this sentiment. She said she sees many staff and administrators come from nearby colleges in order to advance their careers.

“[Wells has] new opportunities to do something exciting in a smaller institution that is more flexible than larger institutions,” she said.

Van Orman and representatives from Ithaca College’s Office of Human Resources said they did not have information about past employees.

Brown said she was satisfied with her decision.

“Wells had the opportunity to take what I learned at Ithaca over those many years and bring everything I had to bear to a very receptive community that was hungry for it,” she said.