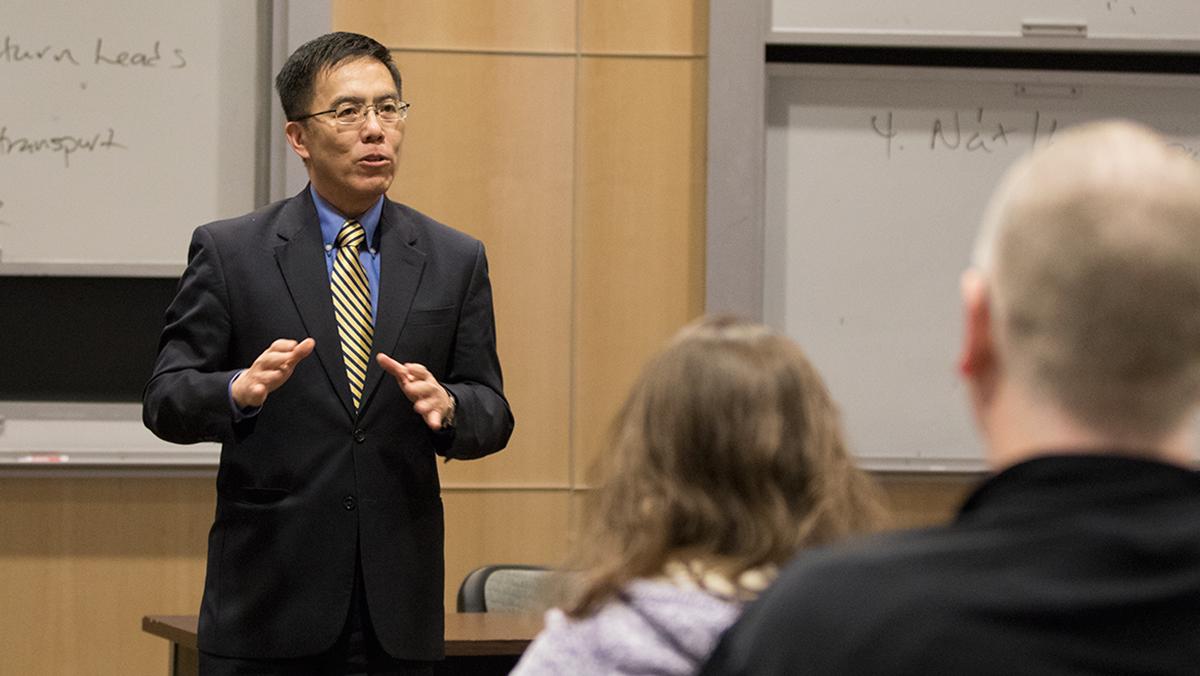 Amanda Den Hartog/The Ithacan
Vincent Wang, associate dean of the School of Arts and Sciences and professor in the Department of Political Science at the University of Richmond, visited the college Dec. 10
By Annika Kushner — Staff Writer
Published: December 16, 2015

The last of four finalists for the position of dean of the School of Humanities and Sciences visited Ithaca College on Dec. 10 to engage in discussions with administrators, faculty, staff and students.

Vincent Wang, associate dean of the School of Arts and Sciences and professor in the Department of Political Science at the University of Richmond, interviewed to replace Leslie Lewis. Lewis left the college in June to accept the position of provost and vice president of academic affairs at Goucher College in Baltimore, Maryland.

The campus community was invited to an open presentation and discussion with Wang in 102 from 12:05 to 1 p.m. Dec. 10 in Textor 102. Approximately 50 administrators, faculty members and students attended the event.

Wang began his presentation with an overview of his background and a statement of his commitment to students and lifelong learning.

“Students are my primary concern,” Wang said. “This question is how do we inculcate a future generation of students into lifelong learners and make a positive contribution to our democratic citizenry?”

He then shared his experience in developing a process for shared governance and his success in boosting the opportunities for international learning at the University of Richmond before beginning the Q&A session.

In the session, Wang discussed his handling of a crisis regarding undergraduate research in the School of Arts and Sciences at the University of Richmond. Wang said he became the associate dean at the university at the end of a three-year, $1 million grant for undergraduate research. However, nobody had a plan for funding research after the grant ended.

Wang emphasized a democratic approach to handling faculty reviews, including the vital role of student feedback in this process. He also spoke about the importance of diversity on campus.

“Our society has become very diverse, and our institutions cannot be an exception,” Wang said. “Because when our students go out into the real society, they will really just be stepping out of a bubble. A bubble is not reality. We need to shatter the bubble.”

He also cited a specific example with a black, first-generation college student who was studying chemistry but then decided to change her major to study India. Wang was the only professor at the university with experience in this area, and he took her under his wing. He helped her apply for a $4,000 undergraduate research fellowship, which was the only income that her family earned that summer.

“That really touched my heart,” Wang said. “I love my students, and I take genuine interest in their success. I pay special attention to those who are especially in need, like in this situation, when a gift can make a difference.”

Wang also spoke about students of color who feel targeted and out of place, saying he doesn’t know if the college had this kind of conversation before, but the conversation is “perhaps long overdue.” He said the dialogue is not going to be “easy or comfortable, but we need to respect one another and not dismiss anybody.”

Wang said as dean, he would listen to the concerns of students of color and ask them what he can do to help.

“As dean, I would pour my heart out to listen — to at least hear them out,” Wang said. “I don’t dismiss them. I will actually listen very carefully and genuinely to what their complaints are. And I think that at a very human level, people need this kind of compassion and empathy.”

Bruce Henderson, professor in the Department of Communication Studies, said he enjoyed Wang’s presentation and thought Wang had a good understanding of the college.

“I thought there was an openness to him — a warmth,” Henderson said. “He felt very approachable, but he also at the same time was very articulate and very — I thought —  intellectually thoughtful and reflective. So he seemed like someone who I, as a faculty member, could talk to about any number of issues.”

During the presentation, Diane Gayeski, dean of the Roy H. Park School of Communications and chair of the H&S dean search committee, said there are links on the Intercom announcements to online feedback forms and emphasized the importance of submitting feedback soon.

Gayeski said the committee will choose a new dean at a final meeting the afternoon of Dec. 11.

Correction: This story has been updated to correct the university at which he handed the crisis regarding undergraduate research and his position at that time.