From the battlefield to Ithaca’s South Hill 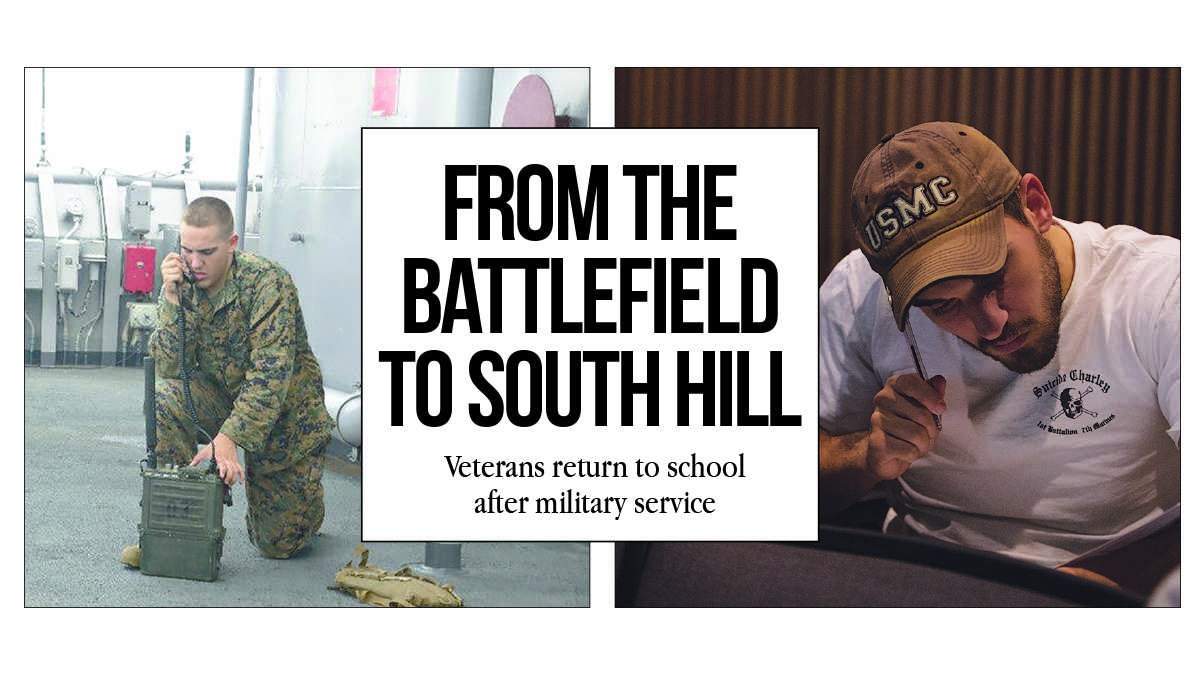 Courtesy of Cody Stahl and Yana Mazurkevich/ The Ithacan
Senior Cody Stahl works on a navy ship in the South Pacific in 2010. He served in the U.S. Marine Corps for four years and now studies clinical excercise science at Ithaca College.
By Elena Piech — Staff Writer
Published: November 4, 2015

At age 23, sophomore Bryan Garner is slightly older than the typical underclassman. When talking to his peers, Garner said he tries not to bring up his experience in the military.

“It’s just, you get looked at differently,” he said. “Especially in, like, a college environment, some people don’t really support the military. So unless someone asks, or it’s needed to be said, then I just kind of blend in with everyone else.”

Nov. 11 is Veterans Day, a national holiday honoring those who have served in the armed forces. According to the Department of Veterans Affairs, in 2013 there were 1 million veterans in higher education, and this number continues to rise. According to the National Conference of State Legislatures, this number makes up just 4 percent of the entire higher education student body. The NCSL further reports that 85 percent of student veterans are 24 years old or older.

Registrar Brian Scholten said Ithaca College currently has 17 enrolled students who have disclosed that they are veterans to receive benefits.

Before he came to the college, Garner served in the military for four years. After graduating in 2011 from Braden River High School in Bradenton, Florida, Garner spent a year training to become a soldier. Then he was stationed as a geospatial engineer in Anchorage, Alaska.

Garner said he joined the military as a way to receive free college tuition and also to give him time to plan his future.

“I wanted to go to college, but I didn’t really know what for,” he said. “Being in the military, it gave me that time to think on what I actually really want to do.”

When looking for colleges, Garner picked the college because the emerging media major enables students to learn animation.

Senior Kahi Hylton said he decided to attend the college for its size and learning environment. Hylton, 29, has already served in the Navy for four years, the Reserves for three years and attended a previous university. Hylton transferred to the college after attending Old Dominion University in Norfolk, Virginia, last year.

Hylton was able to transfer his credits due to the college’s Servicemembers Opportunity Colleges membership. SOC membership allows veterans to easily transfer military or previous college credit to their current institution. The college is one of 1,900 schools that participate in this program.

Scholten said the college joined SOC in 2009, and it continues to participate because it supports veterans.

“President Rochon is a strong advocate for and supporter of those who have served the country through the military,” he said. “The college would benefit from the enrollment of mature, highly motivated adult students.”

Scholten said the college is able to attract these veterans by working with the programs offered by the U.S.

Department of Veterans Affairs. Each program qualifies individuals for different benefits or funding. Hylton said he worked with Holley Westbrook in the Office of the Registrar to determine his financial standing.

According to the NCSL, the Post-9/11 GI Bill enables veterans to receive higher education at a cheaper cost by having the government pay for part of their tuition and also providing a monthly stipend. Even though this bill gives veterans a better chance to pay for college, the NCSL reports that veterans can still struggle adjusting to a college atmosphere.
Garner said the college lacks programs that assist veterans with their general college experience. Even though Garner tries to avoid talking about his previous military experiences with other students, he said the college should have a program that brings together the veterans. Currently, Garner said he only knows one other veteran enrolled at the college.

“I think it would be really beneficial if they were to network us,” he said. “I want to meet them just because we have something in common.”

Senior Cody Stahl, who served in the U.S. Marine Corps for four years, said he has spoken to other veterans at other colleges and has heard the benefits of a networking program.

“When I first got here, I found it hard to relate to some of the students,” he said. “I was older, and I had a lot of different experiences than some of my classmates. Having a network for veterans can help other students interested in the armed services as well as give other veterans a means to talk and ask questions and seek guidance from those who have been on campus longer.”

Hylton said his previous college did have this type of program.

“At [Old Dominion University], they had a student organization called Student Veteran Association that worked with students and staff,” he said. “I have been thinking about starting an SVA at IC but have not made the time to finish the application process with the Student Government and OrgSync.”

Stahl said last year Ryan DeLany, manager of the Academic Advising Center, reached out about trying to form a veteran community at the college. DeLany said an organization like this could be hard to form since students do not have to disclose information regarding veteran status.

“If a student does not self-disclose certain information — in this case that they are a veteran or military-affiliated student — we may not be able to assist as needed,” DeLany said.

“Due to the recent increase in enrollment of veteran and military-affiliated students in higher education institutions across the nation, it is important to address the specific needs of this student population as best as possible,” DeLany said.

Even if the college lacks the ability to network veterans, Garner, Stahl and Hylton all report that the college does give them assistance when they need it.