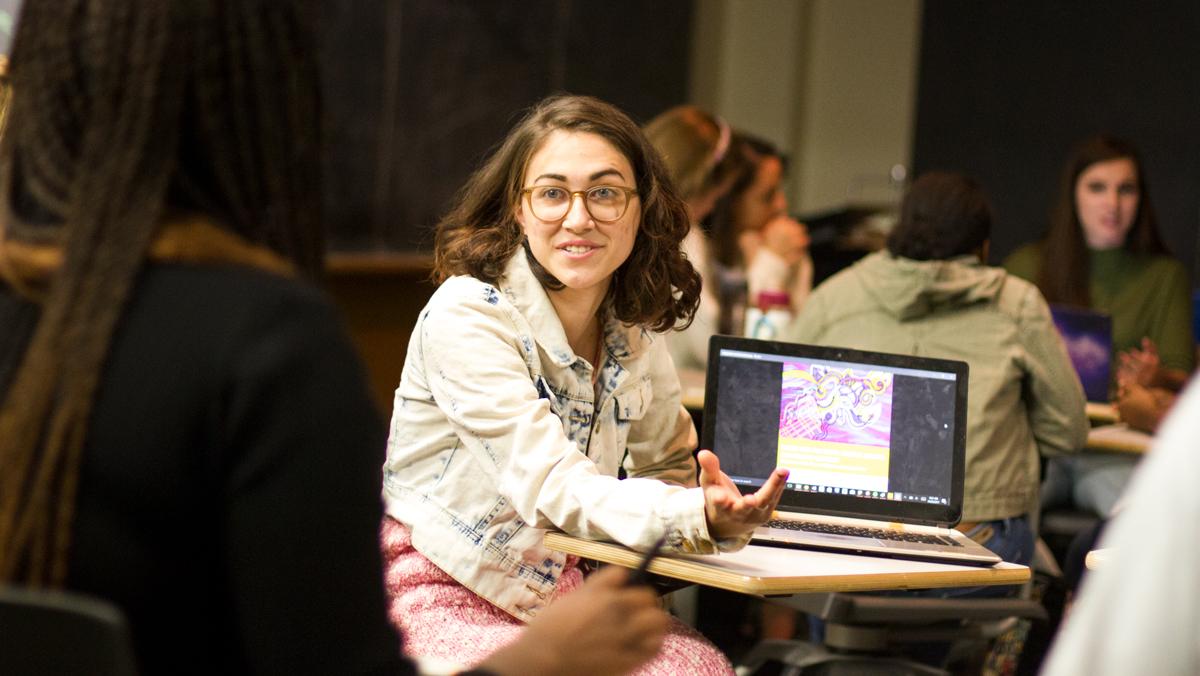 Teddy ZERIVITZ/THE ITHACAN
Junior Izzy Goldberger participates in a meeting for Futures Club Oct. 25. The club has been on campus since Spring 2017.
By Brontë Cook — Staff Writer
Published: October 31, 2017

In the Ithaca College Futures Club’s second semester on campus, the organization continues to inspire dialogue surrounding issues of social justice among students at the college and connect with the Ithaca community through community service.

One of the club’s main goals is to provide a platform for students to engage in difficult — yet rewarding — conversations with their peers who may have opposing political or ideological views through weekly discussion–based meetings, junior Isabel Goldberger, a Futures Club board member, said. In the past, these topics have included race, gender and gun violence.

Goldberger said in order for students to be productive in their efforts to make a difference in society, they must be open to listening to viewpoints that they may not agree with.

“When we talk about issues in politics or social justice, we try to do it with an understanding of where our own biases come from,” Goldberger said. “Engaging in respectful discourse with someone who may be different from you and then trying to understand how their views developed from their upbringing will help close the gap between bipartisanism in this country.”

The idea for the club originally emerged after a group of students was assigned a social justice project in their Cultural Competence Development for Helping Professions class, junior Juwan Bennett, co-founder of Futures Club, said. The assignment called for students to publicly acknowledge a social issue in a way that would catch people’s attention.

Bennett said that he and classmate junior Michael Taormina wanted to create a movement that would highlight youth voices and encourage wider student involvement in social and political justice issues.

“In terms of dealing with our generation and generations to come after us, if there’s not enough movement towards understanding each other, empathizing and listening, we’re just going to keep butting heads,” Bennett said.

The club’s agenda is split into four subsections: human rights, education, environment and health. According to junior Candace Cross, a Futures Club board member, club members are able to choose which group they want to be in, and, within each group, members discuss the various issues related to the topic on campus, in the community and around the world.

Futures Club meets Wednesdays at 9 p.m. in the Center for Natural Sciences. The club is advised by Jennifer McKeon, assistant professor in the Department of Exercise and Sports Sciences. Cross said between 25-40 students typically attend meetings.

In addition to hosting discussions, Futures Club takes action toward achieving social justice by participating in events throughout Ithaca and building connections with local organizations and Ithaca residents. Last year, Futures Club participated in the Southside Community Day of Action, where members picked up trash throughout the Ithaca community, helped paint a mural and introduced children to environmentalism through creative activities.

Futures Club also partnered with Ithaca Mural Projects, a community–based art initiative that aims to bring attention to social injustices by replacing blank wall space in downtown Ithaca with murals that pay respect to minority communities, and Ithaca Mural Projects founder Caleb Thomas came to speak during one of the club’s meetings.

Last April, the group participated in the March for Science, an event in Ithaca that emphasized the importance of science through activities, presentations and discussions. Within the same month, Futures also attended a Planned Parenthood rally hosted by Ithaca College Generation Action where students discussed reproductive health rights. In November, the group will table outside of Music for the Mind: Mental Health Awareness Concert to raise awareness of mental health issues.

Goldberger said that while the club plans to attend community events this semester, she also hopes students will use the group as a resource for implementing their own ideas for events or projects centered around their passions.

While the organization does aim to bring attention to social justice issues, board member junior Calvin Yohannan said the group in no way leans toward a particular political affiliation.

“Often when people hear the term ‘social activism,’ they assume that we are just a super left political organization whose sole mission is to take down the right,” Yohannan said. “But that just couldn’t be further from the truth. We take pride in not being a political group because we feel as if it isolates people, and they get defensive in the process.”

Junior Mihir Siddartha, Futures Club board member, said he is particularly inspired by the club because of the impact the meetings have on the way he views his own role at the college and in the community.

“When I would go to a meeting, I’d leave it feeling better about my general presence at the school,” Siddartha said. “The kind of discussions we have in our meetings are very stimulating. It gives me a lot of hope about the general climate. Having people listening to people talk about the way they see life and different views and topics — it always left me buzzing.”

While meetings and discussions are a large part of the organization, Bennett said, he hopes students will apply the knowledge they learn in the club to the real world.

“One of our main goals is to make the feeling of being uncomfortable, comfortable,” Bennett said. “Whether we’re talking about gender, race or class, very serious and touchy subjects, bringing it into a safe space where people are willing to speak out about it, just even listening can really inspire a lot of people.”