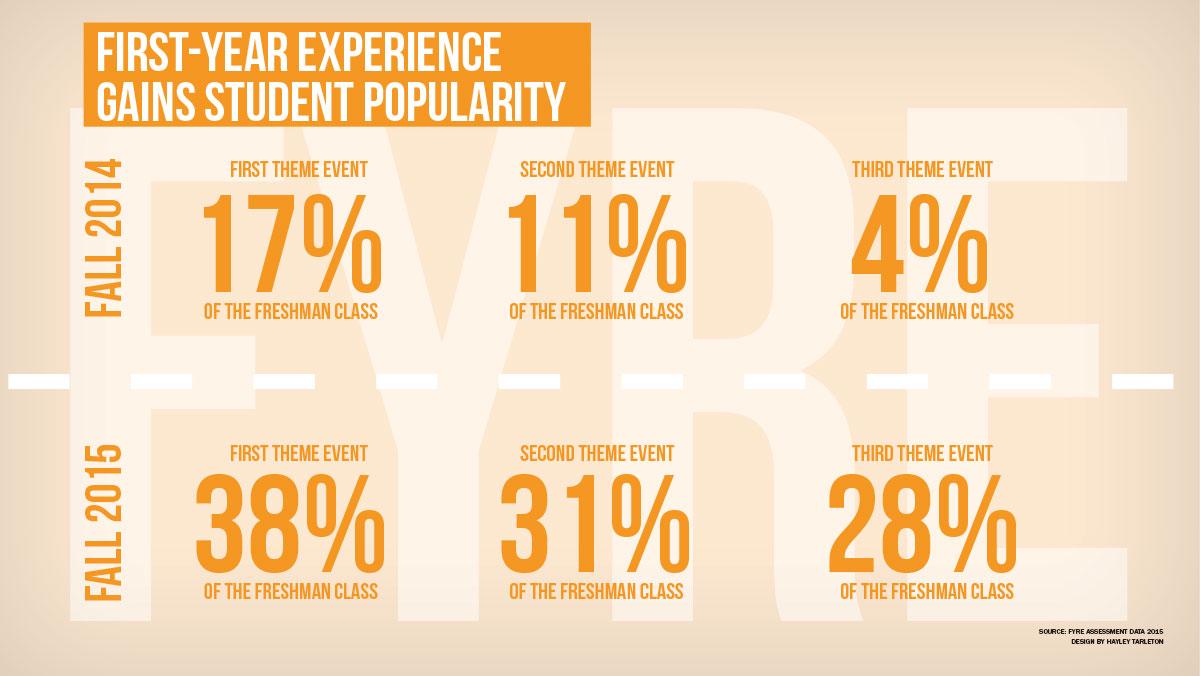 Participation in First-Year Residential Experience programs has nearly doubled in the past two years, largely due to the implementation of a rewards system for attendance, according to surveys conducted by the Office of Residential Life.

The FYRE program has been marketed toward incoming freshmen as a way for students to transition into college life, according to the FYRE webpage. The program hosts campus-wide events and activities for freshmen to interact and feel more at home in college, said Jacqueline Winslow, the director of the FYRE program. These include focus events, or student learning initiatives, which are large-scale educational events with focuses on diversity and inclusion, sustainability, and social and emotional learning, Winslow said.

In 2014, when the program was implemented in all freshman housing, 272 students attended the first focus event held during the fall semester, which represented 17 percent of the freshman class, according to the surveys FYRE conducted for that year. However, at each subsequent event, the turnout fell. The final event for the fall semester recorded 57 students, or three percent of the freshman population, according to data collected by the FYRE since 2014. Data for the spring 2015 semester is not available.

However, data from the 2015–16 school year show that attendance at the focus events doubled from the year before. In the fall of 2015, the average attendance was 30 percent of the freshman class, and in the spring it was 21 percent. Winslow said the reason for the lower turnout in the spring is because it is a busy time for students and that this year, Residential Life would like to host more of the events during the fall semester.

The program has gone through many different changes over the past couple years which have been determined by student feedback, Winslow said. Last year, she said, Residential Life began using engagement points to reward students for attending FYRE events. She said they ran out of prizes last year because of how many people were claiming them.

Winslow said the numbers show a promising increase of student participation but that Residential Life hopes to garner more interest.

“Our hope is to have as many students as possible, around 50 percent, but we are happy with the increases we have been seeing,” Winslow said.

There has not been any data collected on a large scale to show whether there has been more or less student attendance this year, Winslow said.

Sophomore Joe Cruz, a resident assistant, said an event planned earlier in the year fell through because of low attendance and poor planning, since students did not want to commit to a daylong event.

“We were going to go to a farm on the outskirts of Ithaca and we needed a certain amount of people to go in order to fund the trip,” Cruz said. “And we didn’t get the funding because no one signed up.”

However, Cruz said other events have been very successful among students. One de-stress event held by FYRE had 30 students participate, which he said was impressive.

“Our first event for social-emotional learning, the adviser for that through the first-year experience is a psychology professor,” Cruz said. “They wrote things that were stressing them out on balloons, then they blew them up and they popped them.”

Though there is no official data collected by the FYRE on smaller floor events, students and resident assistants have had different experiences with the participation rates.

Freshman Juhi Kapoor said the program should focus on making the events more interesting and accessible to students who have busy schedules.

“It’s a good idea because you get to interact with people on your floor and on your cluster, but we just need to find more motivation factors to try and get people to go to it,” Kapoor said. “I just didn’t have the time, or I just forgot.”

Kapoor also said for some FYRE events, students just go for the free food and prizes, not for the desired intention of the event.

“I know Boothroyd, Rowland and Talcott had a movie night last week, and literally they gave you pizza,” Kapoor said. “And apparently a lot of people came, got the pizza and just left. I think it’s actually pretty cool that they have that, but it’s just getting people to go out to these events.”

This sentiment is not shared by all freshmen, like Magdalena Kwasnica, who said she has attended several FYRE events and has earned 20 engagement points, which are given for each hour of attendance at events. She said she enjoys the program and thinks that it helps people get acclimated to college.

“It made stuff easier,” Kwasnica said. “It gives bonding experiences for getting to know people in the building.”

Ithaca College has enrolled about 200 more students in the Class of 2017 than it originally projected in May, causing residence halls to exceed their capacities and some departments at the college to accommodate more students than anticipated.

The Class of 2017 will be the first participants in a new, year-end First-Year Residential Experience event called First-Year Friday that will be held from 11 a.m. to 2 p.m. April 11 on the Fitness Center Quad.