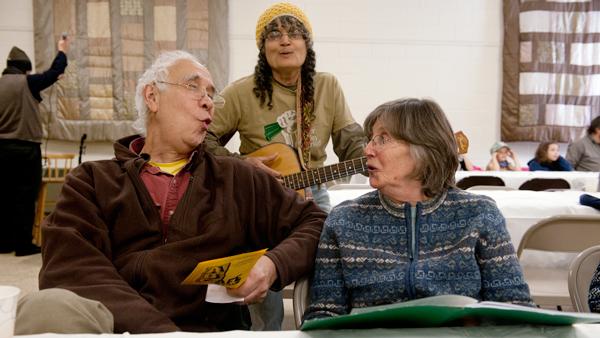 Rachel Orlow
From left, Marty Hatch and his wife Susan sing along with local musician Aro Veno on Saturday at "ABC Café for a Day."
By Kelsey O'Connor — Editor in Chief
Published: January 31, 2013

Fresh food is not always the cheapest option, which turns many to the dollar menu. However, some locals are working to break the barriers to healthy food.

On Saturday, hundreds of Ithaca residents came out to support Gardens 4 Humanity, a food justice group created in 2009 that promotes health through education and community initiatives. Titled “ABC Café for a Day,” the event was also an homage to the closed cafe that was once a local favorite.

The Brooktondale Community Center, located about 15 minutes from downtown Ithaca, was transformed into a pop-up vegetarian kitchen for the day. While local musicians like Art Bakert and Tiffany Lu were jammed in the corner, plates of fresh salads topped with dressings from mason jars, squash curry soup and the ABC Café classic Mockingburgers were rushed around to the always-full tables.

Josh Dolan, lead educator and organizer at G4H, said the event Saturday was to help reach the group’s $6,000 goal for a mobile kitchen, a community garden hub and a neighborhood garden coordinator.

“We’re trying to increase food security in Ithaca and also empower community members to kind of take a more active role in the food system in a number of ways,” Dolan said.

Some initiatives of G4H include after-school programs for teenagers, neighborhood gardening services, planting and harvesting in Tompkins County. They also hold Junior Iron Chef competitions and teach members of the community to be leaders in gardening creation and management.

Local food movements have been growing in New York state and nationally, working to bridge gaps in access to healthy food. WhyHunger is New York City-based grassroots support organization that works to solve hunger problems in communities through sustainable farming and food access. Noreen Springstead, director of marketing and fundraising at WhyHunger, said there is an increased national emphasis on healthy, fresh food over processed food.

“The tide has moved in the direction of this heavily concentrated agri-business model that is very chemical intensive and wreaking havoc on the environment and our individual health,” Springstead said. “There is an awakening around food, around cooking food, growing food and the health benefits that good food can bring to you.”

According to Feeding America, a nationwide network fighting hunger, 50.1 million Americans were living in food insecure households in 2011.

With a mobile kitchen, Dolan said, G4H can educate members of the community on how to cook fresh, local produce. Dolan, who has traveled to areas that have been affected by either economic or natural hardships, such as New Orleans and Detroit, said he drew inspiration from successful urban community food justice programs.

“Different groups, whether it be low income groups, people of color, elderly people or people with disabilities, have been marginalized in terms of having access to the food system or the economic benefits that can come from owning a small business or owning land,” Dolan said.

Springstead said the most power resides in local movements to change the food system.

“Everybody deserves the right to nutritious food,” Springstead said.

Many of the visitors Saturday were not only there to support G4H but to have a taste of food from the defunct ABC Café menu. The popular cafe, which had been located on Stewart Avenue, went out of business about two years ago. Many of the volunteers, including Dolan, had previously worked at ABC Café.

Lines formed at several times Saturday to get into “ABC Café for a Day.” With reggae by Shaka playing in the background, lines began to swell midday. Among that was Ithaca College junior Sam Boyles and Amy Cohen ’08. Cohen said she came for the old “warm and cozy” ABC Café vibe.

“It was like being in a friend’s living room kind of a vibe,” Cohen said. “There was always music casually being played and good food.”

Ithaca resident Marty Hatch, along with his wife, Suzie, said they had been longtime patrons of the ABC Café.

“It was pioneering, basic, hearty, inventive; it had a progressive feel to it in general in terms of cuisine and ideas about how it fits into the community,” Hatch said.

Hatch and his wife were at “ABC Café for a Day” for the food and to support G4H because of the impact it has on the local community.

“Everybody says Ithaca is 10 square miles surrounded by reality,” Hatch said. “I’d like to think that Ithaca is 10 square miles of reality surrounded by fantasy, because it is really trying to develop different procedures for living in the world today, and frankly, the world isn’t doing a good job of figuring out how to live by itself, so local solutions are really important.”

There are no immediate plans for another ABC Café pop-up kitchen, but Dolan said there will continue to be events in the future.