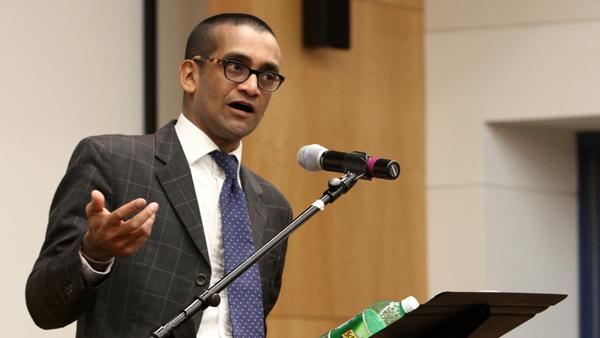 Shayana Kadidal, senior managing attorney for the Center for Constitutional Rights, speaks to an audience Thursday night in Park Auditorium about how the First Amendment has an effect on politics in regards to online opposition.
By Gillian Nigro — Staff Writer
Published: September 30, 2012

The controversial case of Julian Assange and Wikileaks was a focus of Shayana Kadidal’s lecture Thursday night in the Park Auditorium. Kadidal, senior managing attorney of the Guantanamo Global Justice Initiative at the Center for Constitutional Rights, used the Assange case and others to discuss the line where free speech crosses over into espionage.

The event was held in observance of Constitution Day 2012. This nationwide celebration stems from a May 2005 congressional mandate that all educational institutions receiving federal funding are required to hold a program pertaining to the U.S. Constitution on or around Sept. 17 of each year, the day the document was signed in 1787. Though it is a private institution, the college falls under this jurisdiction because some students enrolled receive federal financial aid.

Kadidal’s speech, “WikiLeaks, Bradley Manning and the First Amendment,”  was co-sponsored by the office of the provost, the department of politics, the legal studies program and the Park Center for Independent Media.

Beth Harris, associate professor of politics and chief coordinator of the event, said she takes advantage of the federal requirement by bringing in speakers each year to explore a different aspect of the Constitution. Kadidal, with his background in legal cases of the post-9/11 world, fit the bill.

“This year, it’s a great opportunity to see the contemporary significance of our Bill of Rights, particularly the First Amendment,” Harris said.

Kadidal said WikiLeaks founder Julian Assange is currently staying at the Ecuadorian embassy in London to avoid extradition to Sweden on charges of sexual assault. This fact introduced a discussion of his case and the open-ended legal questions that still remain. Kadidal said there are questions of extraterritoriality, intent and republication.

“These are open questions in the law simply because there haven’t been many espionage prosecutions,” Kadidal said. “The bottom line is that at some level truth-telling contains risk.”

Within the Assange case is Bradley Manning, the U.S. soldier who has been held in military custody for more than two years after his arrest in 2010 on suspicion of supplying classified material to WikiLeaks. But this would qualify as a journalist’s day-to-day job, Kadidal said.

“If the government can prosecute Julian Assange for conspiring with Manning to turn over some of these documents, then pretty much all investigative journalists who work on national security cases are going to be viewed as conspirators,” Kadidal said.

Sophomore Zach Briggs said he was shocked to hear of some of the actions the U.S. government could get away with. One example of this was Manning’s extraordinarily harsh pre-trial conditions in an attempt to break him and validate the government-pursued conspiracy charge with Assange, as Kadidal said.

“Being told about these weird, terrible things that can occur in your government, you just think on a moral level — on a basic human-being level — how could you let that pass?”