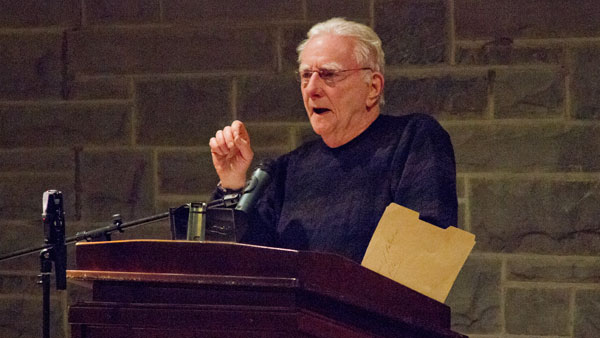 The Israeli education boycott debate at Ithaca College came to a head on Jan. 25 when two groups hosted guest speakers with opposite views only one hour apart and across the hall from each other.

The American Studies Association passed a resolution Dec. 4 to endorse the boycott of Israeli academic institutions, arguing Israel’s occupation of Palestine violates the human rights and academic freedoms of Palestinians. Ithaca College president Tom Rochon denounced the boycott in a statement relayed via Intercom on Jan. 9. The boycott, officially known as the Boycott, Divestment and Sanction movement, was originally launched by the Palestinian Civil Society in 2005.

Eric Cheyfitz, professor of American studies and humane letters at Cornell University, spoke in support of the academic boycott of Israeli institutions at a lecture sponsored by the departments of English and politics; the Center for the Study of Culture, Race and Ethnicity; and the Park Center for Independent Media. Cheyfitz’s lecture was at 7 p.m. in the Klingenstein Lounge in the Campus Center.

Directly across the hall in the Clark Lounge, William Jacobson, clinical professor of law and director of the securities law clinic at the Cornell University Law School, spoke against the academic boycott of Israel at 8 p.m. at an event co-sponsored by the Jewish studies program and Hillel at Ithaca College.

Jacobson reached out to the organizers of the first lecture, in which Cheyfitz defended the Dec. 4 decision by the ASA. Jeff Cohen, director and associate professor of the journalism department and director of the Park Center for Independent Media, which co-sponsored the Cheyfitz event, said organizers of the pro-boycott lecture responded to Jacobson’s request and offered him five minutes to present the opposing viewpoint immediately following Cheyfitz’s lecture but before the question-and-answer period.

“I would have loved to be on the stage with someone I disagree with vehemently on this issue,” Jacobson said. “I think that would have been a better approach.”

Beth Harris, associate professor of politics at the college, said via email that while debates can be positive learning experiences, they serve a different purpose than what this event intended.

“In my 14 years at Ithaca College, I have never heard of an outsider demanding that he get equal time in program that has already been planned with a guest scholar that he disagrees with,” Harris said.

Harris also said Hillel set up a program that she thought was deliberately rude to Cheyfitz because it ultimately drew people out of the room before his presentation was over.

“If you want to have a collaborative event, you don’t try to sabotage an existing program,” Harris said. “You call for a planning meeting and discuss what would be the best way to work together to meet a common goal. Neither Hillel nor Jewish Studies took this kind of initiative. While I am not surprised by Hillel’s approach, I am disappointed that Jewish Studies, as another academic unit, would not want to work collaboratively on events.”

According to the Hillel community on campus, there was no intent to sabotage the Cheyfitz lecture. Igor Khokhlov, executive director of Hillel at the college, said Hillel intentionally planned the Jacobson event at 8 p.m. to allow time for the pro-boycott lecture and subsequent Q-and-A period to conclude.

“When I went back to my board members, they said if Cheyfitz was talking for 30 minutes and there would probably be another 30 minutes of Q-and-A, likely they would be done within an hour or so,” Khokhlov said. “There was no ill intention to cut them off or control the agenda.”

Harris said while Hillel hosts speakers on campus, the group does not make an effort to expose students to diverse opinions about the Israeli academic boycott issue.

“In none of Hillel’s events about Zionism or Israel have they ever sought a second speaker who would be anti-Zionist or critical of Israeli policy,” Harris said.

However, Hillel could face challenges if it tried to co-sponsor a joint event that included a pro-boycott speaker. According to Hillel’s international guidelines for campus Israel activities, Hillel will not partner with, house or host organizations, groups or speakers who support the boycott of, divestment from or sanctions against the State of Israel.

While Khokhlov said he would not financially sponsor pro-boycott speakers, in accordance with Hillel’s international guidelines, he will find ways to make sure his students can attend conversations both for and against the boycott.

“We have academic partners,” Khokhlov said. “This last event yesterday was sponsored by the Jewish studies department, as well. That’s a very easy solution for us. When the Jewish studies program co-sponsors an event, then Hillel doesn’t necessarily have to formally sponsor it.”

Both Cheyfitz and Jacobson want academic freedom for all but have different ideas about how to accomplish that end. Junior Rebecca Levine, president of the campus Hillel community, said she encouraged both sides to come together in the future.

“I do think it is very important to keep the conversation open and encourage those who are willing to share their opinions and explore further,” Levine said.