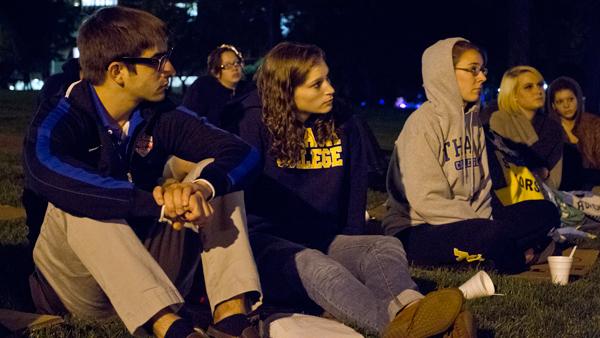 Alex Mason/The Ithacan
Members of Ithaca College's Habitat for Humanity listen to speakers discuss their experiences with homelessness on the Academic Quad Thursday night as part of the annual Sleepout for Homelessness, an event designed to inform students about the problem of homelessness in our society.
By Lucy Walker — Staff Writer
Published: October 1, 2012

A clump of sleeping bags and cardboard near Campus Center on the academic quad were home for about 20 students who participated in the IC Habitat for Humanity annual Sleepout for Homelessness on Saturday. The event was meant to help students better understand issues surrounding homelessness by sleeping outside for a night.

Junior Emily Meshumar, a member of IC Habitat for Humanity, said though the group was dedicated to the cause, inclement weather may have caused a low turnout. The gathering was not as large as last year, when about 30 students participate.

“There weren’t that many people,” Meshumar said. “There was just a handful of us.”

However, as the evening progressed, it became difficult for the group to remain there.

The club organizes the event every year so students can learn what it feels like to be homeless. This year three speakers shared stories about their experiences with homelessness while participants drank hot chocolate and tea. Between 10 and 20 stragglers joined to listen at various points in the evening.

Senior Jacqueline Keating, president of IC Habitat for Humanity, said the event has a visual presence on campus and encourages passersby to ask questions.

“It’s a really good way to draw people’s attention in, having a very visible presence on campus,” Keating said. “It turns a lot of heads and makes people come ask questions about what we’re doing.”

Keating said it also helps build community within the organization.

“It’s also a lot of fun to do right at the beginning of the year, because it’s a good way for new members to get to know each other, sleeping outside together,” Keating said.

It was Meshumar’s first sleep-out, but it showed her how much can be done.

“It was definitely an experience,” Meshumar said. “This was the least we could do, not sleeping inside. Plus listening to the speakers was very inspirational and made me more happy to sleep outside and do this.”

Fred Wilcox, associate professor of writing, spoke first and discussed his previous struggle living on the streets of New York City and the paranoia and fear it caused him to have.

Dylan Hughes, a native of Ithaca, then talked about his tumultuous childhood, which took him from New York to North Carolina and back again. For him, compassion is integral in the struggle to end homelessness.

“Just follow your heart, really,” Hughes said. “If you feel like you should do something, like build a house for somebody, or you see someone on the side of the street that really looks like they don’t have much, a jacket helps or even a blanket, something helps them. Whatever it is, if your heart tells you to do it, do it, don’t hesitate.”

Erik Lehmann concluded the evening when he described his own journey from being a homeless teenager to a Cornell University graduate and how it brought him to his current work with Dream Catalyst, an organization dedicated to helping youth in homeless situations.

Dream Catalyst supports youth through mentorship, similar to Big Brother Big Sister, except Lehmann wants to create triad support systems. He said he wants to give people the skills and help they need, while celebrating things often forgotten, like birthdays, and encouraging great accomplishments.

The role students can play in ending homelessness was a common theme throughout the evening. Lehmann encouraged students to get involved on campus in an organization like Habitat or even start a chapter of Dream Catalyst. All three speakers emphasized the importance of awareness.

“One of my big things is to get the story out,” Hughes said.

Lehman said he hopes to show people that youth homelessness is an underrepresented problem.

“Homelessness in youth is one of the least understood conditions because teens are couch-surfing, they’re going from friend to family member to extended cousin, for like two to three weeks at a time,” Lehmann said. “And that’s not a way to live your high school years and still care about school.”