‘Half the Sky’ incites student opposition 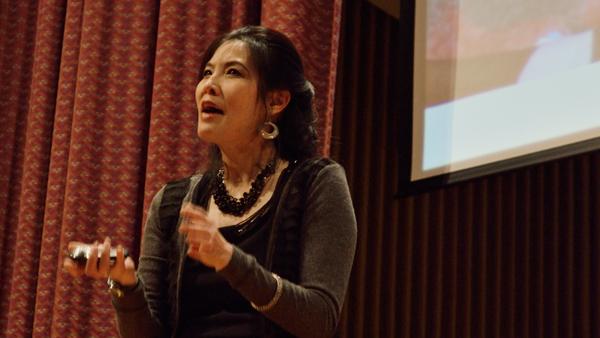 What was meant to be a “difficult dialogue” about gender inequity and challenges, warped instead into an opposition by some students to the Half the Sky movement, a global campaign aiming to empower women against oppression.

A group of students have organized against the Half the Sky movement after heated debates during a question and answer session Nov. 1 at the Peggy R. Williams Difficult Dialogues Symposium featuring speaker Sheryl WuDunn, co-creator of the movement. The Half the Sky movement stemmed from the book and movie “Half the Sky: Turning Oppression into Women Worldwide.”

About 10 students came together after seeing the short preview of the movie on Oct. 5 and gathered for an Intersectionali-tea meeting to discuss the book of the same name. Intersectionali-tea is a group which meets, drinks tea and discusses the intersections of race, gender and other identities, senior Dylan Lowry said. The group subsequently organized questions and criticisms to raise after WuDunn’s speech about her work with women in developing countries.

“The problem we all had with it is that [Half the Sky] makes [the oppression] worse,” Lowry said. “It allows it to continue.”

Students had a meeting Monday to continue discussions about Half the Sky and WuDunn’s presentation. Grace Woodward, co-president of IC Feminists, said she attended but did not give specific details, including the organizations and individuals involved.

During the Difficult Dialogues presentation, WuDunn, who is co-author of the book and film with husband Nicholas Kristof, New York Times columnist,  discussed the major gender inequity challenges women face worldwide, such as sex trafficking, maternal mortality and lack of education and opportunity available to girls and women. WuDunn also discussed ways in which empowering women could end these cycles.

WuDunn said the thesis of her book and the overarching theme of the movement and her talk was that “Women and girls aren’t the problem. They are the solution.” WuDunn used emotional and specific anecdotes to illustrate this point throughout the presentation.

However, the movement has received national and international criticism, including some from journalist and feminist Germaine Greer of The Guardian.

“The authors have no critique of globalism to offer, nor do they appear to grasp how Western economic power keeps the developing world too poor to develop,” she wrote in The Guardian in July 2010.

This sentiment was shared by some Ithaca College students who disagree with how the movement has manifested itself into Western culture, especially taking issue with the way the film was produced.

Lowry said he was upset that the book claims it is about women worldwide while the authors only traveled to a set number of countries.

“It’s a white supremacist message. The only white people on camera are the saviors, and the message is that they need us; they need us saviors, and it only takes five minutes a month,” he said.

WuDunn discussed the difficulties of covering the issues as a journalist during her presentation.

“I do want to give you a reality check,” she said. “I know that it is extremely difficult to help people and to make things work — development is extremely hard.”

During the Q-and-A, Lowry made the claim that Kristof was a slave owner himself, based on an earlier comment WuDunn made in which she said her husband had purchased two girls from a brothel while working on the book.

“Well, did you actually read the book?” WuDunn said.

“Well, I read parts of it,” Lowry said. He also said he has seen half of the documentary.

WuDunn said one of the anecdotes included in the book explained how her husband had purchased two female prostitutes in hopes to gain access to the brothel for research and also in hopes to set the girls free, which he was eventually successful in doing.

“I’m sorry I implied he was a slave owner; he wasn’t,” she said. “He just paid so that they could be free.”

Senior Kristy Zhen, one of the students who asked questions, criticized the way she felt WuDunn’s husband insensitively asked the victims to retell horrific and dramatic details of rape and other cruelties, to which WuDunn responded saying interviewees were aware of the questions and were on board with the project. Zhen said she was unhappy with WuDunn’s response.

“I’m disappointed that she didn’t take any issue with the film, because I think that for one to see the validity in criticisms just shows how you are looking at the issue from all different perspectives,” she said. “And clearly she is sticking to her approach and her husband’s approach at looking at these issues.”

Cathy O’Neill Spallone, a Groton High School teacher who had brought her human rights class to see WuDunn speak, made the last comment of the night.

“What is lacking from some of the last questions and attacks clearly is a full reading of the book,” she said. “As a teacher of world genocide and human rights, your book unlocks the dirty causes of [oppression], and you put a face and a reality and you open people’s hearts, and you are creating an awareness in the world.”

After the event, WuDunn said though some students expressed discomfort with Half the Sky’s approach, she hopes they will take action and find better alternatives to help women worldwide.

“I just said what I really felt. We would love to have more people in this trying to come up with better ways of doing it [helping women],” she said. “We’re the first and the challenge is to do a better job.”

Lowry said he was pleased he and other students critical of Half the Sky had spoken up at the event.