‘Half the Sky’ spurs debate 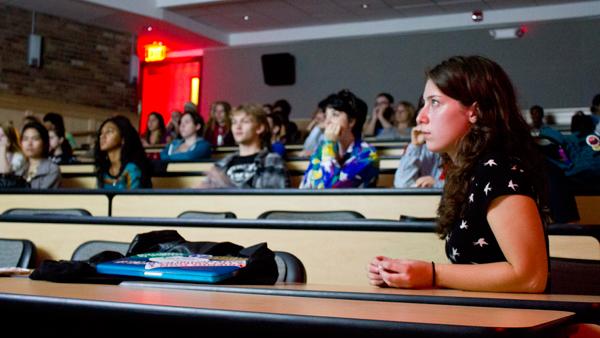 Scott Nolasco/The Ithacan
Sophomore Kaley Belval, campus ambassador for "Half the Sky" and member of IC Feminists, watches Half the Sky at its screening Friday night in Textor Hall.
By Michael Tkaczevski — Contributing Writer
Published: October 8, 2012

A heated debate was sparked among viewers over the presentation of a 40-minute excerpt from the film “Half the Sky: Turning Oppression into Opportunity for Women Worldwide” on Friday night.

The event was sponsored by IC Feminists, More Than Me, Students Active For Ending Rape and She’s The First. Sophomore Kaley Belval, who organized the screening, said the event was meant to generate awareness of human rights violations throughout the world against women.

Viewers took issue with the excerpt’s short length — the film is four hours long in full length — and its use of celebrities. A few criticized the audacity of privileged Americans to try to report on foreign issues. One student in the audience accused the film of having Neo-Colonialist overtones.

“Half the Sky” follows the investigations by Nicholas Kristof and Sheryl WuDunn, a “mom and pop” reporter team for the New York Times, into human rights violations against women around the world. Kristof and WuDunn’s report on China’s epidemic of female infanticide inspired them to broaden their scope years later.

Senior Dylan Lowry said he felt offended because the short excerpt “removed the humanity” from the girls’ lives.

“Showing a 10-minute teaser of a person who was raped is just not right,” Lowry said.

The documentarians interviewed girls and women in countries such as Vietnam, India, Somaliland and many others. Celebrities including Olivia Wilde and America Ferrera visited victims of abuse, rape and economic poverty.

Many viewers felt the celebrities were unnecessary, and there wasn’t a deep enough exploration of the countries in the 40-minute version, but they left the lecture hall wanting to learn more about human rights violations against women throughout the world.

Sophomore Hannah Steinfeld said the excerpt gave her a better understanding of worldly issues. A member of IC More Than Me, an organization on campus dedicated to spreading awareness about foreign issues, Steinfeld said “the celebrities were beneficial, if artificial.”

The accusation that Americans are willfully ignorant of problems outside of the U.S. also entered the debate. Some viewers contested this assertion, like freshman Frances Johnson.

“It’s a choice to be open-minded,” Johnson said. “Saying that Americans don’t care is a crass generalization. Americans and foreigners need to open up and look at issues from different perspectives.”

Belval said the full film emphasizes the women in the foreign countries over the journalists or the celebrities.

“It’s important to realize that most of the organizations in these countries were created by women in the countries with first-hand experience of the issues,” Belval said.

WuDunn will visit the college at 7:30 p.m. Thursday, Nov. 1, in Ford Hall. There are plans to screen the entire film in parts. WuDunn will discuss “Half the Sky” and sign copies of books that are available in the IC Bookstore.